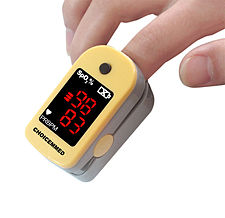 A finger mounted pulse oximeter taking measurement through the fingernail.

A pulse oximeter (saturometer) is a medical device that indirectly monitors the oxygen saturation of a patient's blood (as opposed to measuring oxygen saturation directly through a blood sample) and changes in blood volume in the skin, producing a photoplethysmograph. It is often attached to a medical monitor so staff can see a patient's oxygenation at all times. Most monitors also display the heart rate. Portable, battery-operated pulse oximeters are also available for home blood-oxygen monitoring. The original oximeter was made by Millikan in the 1940s.[1] The precursor to today's modern pulse oximeter was developed in 1972, by Aoyagi at Nihon Kohden using the ratio of red to infrared light absorption of pulsating components at the measuring site. It was commercialized by Biox in 1981. The device did not see wide adoption in the United States until the late 1980s.

A blood-oxygen monitor displays the percentage of arterial hemoglobin in the oxyhemoglobin configuration. Acceptable normal ranges for patients without COPD with a hypoxic drive problem are from 95 to 99 percent, those with a hypoxic drive problem would expect values to be between 88 to 94 percent, values of 100 percent can indicate carbon monoxide poisoning. For a patient breathing room air, at not far above sea level, an estimate of arterial pO2 can be made from the blood-oxygen monitor SpO2 reading.

A pulse oximeter is a particularly convenient noninvasive measurement instrument. Typically it has a pair of small light-emitting diodes (LEDs) facing a photodiode through a translucent part of the patient's body, usually a fingertip or an earlobe. One LED is red, with wavelength of 660 nm, and the other is infrared, 905, 910, or 940 nm. Absorption at these wavelengths differs significantly between oxyhemoglobin and its deoxygenated form; therefore, the oxy/deoxyhemoglobin ratio can be calculated from the ratio of the absorption of the red and infrared light. The absorbance of oxyhemoglobin and deoxyhemoglobin is the same (isosbestic point) for the wavelengths of 590 and 805 nm; earlier oximeters used these wavelengths for correction for hemoglobin concentration.[2]

The monitored signal bounces in time with the heart beat because the arterial blood vessels expand and contract with each heartbeat. By examining only the varying part of the absorption spectrum (essentially, subtracting minimum absorption from peak absorption), a monitor can ignore other tissues or nail polish, (though black nail polish tends to distort readings)[3] and discern only the absorption caused by arterial blood. Thus, detecting a pulse is essential to the operation of a pulse oximeter and it will not function if there is none.

A pulse oximeter is useful in any setting where a patient's oxygenation is unstable, including intensive care, operating, recovery, emergency and hospital ward settings, pilots in unpressurized aircraft, for assessment of any patient's oxygenation, and determining the effectiveness of or need for supplemental oxygen. Assessing a patient's need for oxygen is the most essential element to life; no human life thrives in the absence of oxygen (cellular or gross). Although a pulse oximeter is used to monitor oxygenation, it cannot determine the metabolism of oxygen, or the amount of oxygen being used by a patient. For this purpose, it is necessary to also measure carbon dioxide (CO2) levels. It is possible that it can also be used to detect abnormalities in ventilation. However, the use of a pulse oximeter to detect hypoventilation is impaired with the use of supplemental oxygen, as it is only when patients breathe room air that abnormalities in respiratory function can be detected reliably with its use. Therefore, the routine administration of supplemental oxygen may be unwarranted if the patient is able to maintain adequate oxygenation in room air, since it can result in hypoventilation going undetected.

Because of their simplicity and speed, pulse oximeters are of critical importance in emergency medicine and are also very useful for patients with respiratory or cardiac problems, especially COPD, or for diagnosis of some sleep disorders such as apnea and hypopnea. Portable battery-operated pulse oximeters are useful for pilots operating in a non-pressurized aircraft above 10,000 feet (12,500 feet in the US)[4] where supplemental oxygen is required. Prior to the oximeter's invention, many complicated blood tests needed to be performed. Portable pulse oximeters are also useful for mountain climbers and athletes whose oxygen levels may decrease at high altitudes or with exercise. Some portable pulse oximeters employ software that charts a patient's blood oxygen and pulse, serving as a reminder to check blood oxygen levels.

Oximetry is not a complete measure of respiratory sufficiency. A patient suffering from hypoventilation (poor gas exchange in the lungs) given 100% oxygen can have excellent blood oxygen levels while still suffering from respiratory acidosis due to excessive carbon dioxide.

It is also not a complete measure of circulatory sufficiency. If there is insufficient bloodflow or insufficient hemoglobin in the blood (anemia), tissues can suffer hypoxia despite high oxygen saturation in the blood that does arrive.

A higher level of methemoglobin will tend to cause a pulse oximeter to read closer to 85% regardless of the true level of oxygen saturation. It also should be noted that the inability of two-wavelength saturation level measurement devices to distinguish carboxyhemoglobin due to carbon monoxide poisoning from oxyhemoglobin must be taken into account when diagnosing a patient in emergency rescue, e.g., from a fire in an apartment. A pulse CO-oximeter measures absorption at additional wavelengths to distinguish CO from O2 and determines the blood oxygen saturation more reliably.

According to a report by Frost & Sullivan entitled U.S. Pulse Oximetry Monitoring Equipment Market, US sales of oximeters were worth $201 million in 2006. The report estimated that oximeter sales in the US would increase to $310 million annually by 2013.[5]

In 2008, more than half of the major internationally-exporting medical equipment manufacturers in China were producers of pulse oximeters.[6]

In June, 2009, video game company Nintendo announced an upcoming peripheral for the Wii console, dubbed the "Vitality Sensor," which consists of a pulse oximeter. This marks the onset of the use of this device for non-medical, entertainment purposes.[7][8]