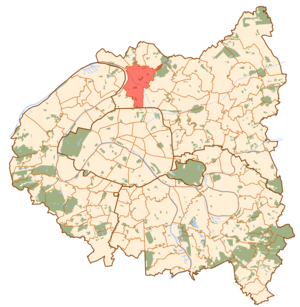 Saint-Denis is a commune in the northern suburbs of , . It is located 9.4 kilometres (5.8 miles) from the centre of Paris. Saint-Denis is a "" of the "département", being the seat of the Arrondissement of Saint-Denis.

Saint-Denis is home to the royal necropolis of and was also the location of the associated . It is also home to France's national stadium, , built for the .

Saint-Denis is a formerly industrial suburb currently reconverting its economic base.

Inhabitants of Saint-Denis are called "Dionysiens".

Until the 3rd century Saint-Denis was a small settlement called "Catolacus" or "Catulliacum", probably meaning "estate of Catullius", a landowner. About 250, the first , Saint Denis, was martyred on hill and buried in "Catolacus". Later his grave became a shrine and a pilgrimage center, with the building of the Abbey of Saint Denis, and the settlement was renamed Saint-Denis.

In 1793, during the , Saint-Denis was renamed "Franciade" in a gesture of rejection of religion. In 1803, however, under the Consulate of Napoléon Bonaparte, the city recovered its former name of Saint-Denis.

During its history, Saint-Denis has been closely associated with the French royal house; starting from , almost every French king is buried in the Basilica.

However, Saint-Denis is older than that. In the 2nd century, there was a village named "Catolacus" on the location that Saint-Denis occupies today. Saint Denis, the first bishop of Paris and patron saint of France, was martyred in about 250 and buried in the cemetery of Catolacus. Denis' tomb quickly became a place of worship.

Sainte Geneviève, around 475, had a small chapel erected on Denis' tomb, by then a popular destination for pilgrims.

It was this chapel that Dagobert I had rebuilt and turned into a royal monastery. Dagobert granted many privileges to the monastery: independence from the bishop of Paris, the right to hold a market, and, most importantly, he was interred in Saint-Denis; a tradition which was followed by almost all his successors.

During the , because of the privileges granted by Dagobert, Saint-Denis grew very important. Merchants from all over (and indeed from the ) came to visit its market.

In 1140, , counselor to the King, granted further privileges to the citizens of Saint-Denis. He also started the works of enlargement of the basilica that still exists today, often cited as the first example of . [Rolf, Toman (ed.) (2004). "Der Gothisch". Ullmann & Könemann // Swaan, Wim (1969). "The Gothic Cathedral" // Several others.]

During the , the Battle of Saint-Denis was fought between s and s on . The Protestants were defeated, but the Catholic commander was killed. In , the city surrendered to Henry IV, who converted to Catholicism in in the abbey of Saint-Denis.

King Louis XIV started several industries in Saint-Denis: weaving and spinning mills and dyehouses. His successor, Louis XV, whose daughter was a nun in the , took a lively interest in the city: he added a chapel to the convent and also renovated the buildings of the royal abbey.

During the French Revolution, not only was the city renamed "Franciade" from to , but the royal was looted and destroyed. The remains were removed from the tombs and thrown together; during the , since they could not be sorted out anymore, they were reburied in a common .

The last king to be interred in Saint-Denis was Louis XVIII. After France became a republic and an empire, Saint-Denis lost its association with royalty.

On , the city of was enlarged by annexing neighboring communes. On that occasion, the commune of was disbanded and divided between the city of Paris, Saint-Denis, Saint-Ouen, and . Saint-Denis received the northwestern part of La Chapelle-Saint-Denis.

During the 19th century, Saint-Denis became increasingly industrialized. Transport was much improved: in 1824 the was constructed, linking the in the northeast of Paris to the River at the level of , and in 1843 the first reached Saint-Denis. By the end of the century, there were 80 factories in Saint-Denis.

The presence of so many industries also gave rise to an important . In 1892, Saint-Denis elected its first administration, and by the 1920s, the city had acquired the nickname of "la ville rouge", the red city. Until in , all of Saint-Denis were members of the Communist Party.

During the , after the defeat of France, Saint-Denis was occupied by the Germans on , . There were several acts of sabotage and strikes, most notably on , at the Hotchkiss factory. After an which started on , , Saint-Denis was liberated by on .

After the war, the economic crisis of the 1970s and 1980s hit the city, which was dependent on its heavy industry, heavily.

During the 1990s, however, the city started to grow again. The 1998 Football World Cup provided an enormous impulse; the main stadium for the tournament, the , was built in Saint-Denis, along with many infrastructural improvements, such as the extension of the metro to Saint-Denis-Université.

In , together with Paris, Saint-Denis hosted the second .

Saint-Denis is also served by La Plaine &ndash; Stade de France station on Paris RER line B, which is the closest station to the sports arena.

Finally, Saint-Denis is also served by two stations on Paris RER line D: Stade de France &ndash; Saint-Denis and Saint-Denis. This last station, historically the only rail station in Saint-Denis before the arrivals of the Métro and the RER, serves also as an interchange station for the suburban rail line.

Saint Denis is infamous in France for its crime rate. It has 150.71 criminal incidents per 1000 inhabitants, far higher than national average (83/1000) and even higher than the crime rate of the Seine Saint Denis department (95.67/1000). Police efficiency has also been reported as very low with only 19.82 % of crime solved by the police. Despite this high crime rate, the city was relatively spared by the 2005 riots.