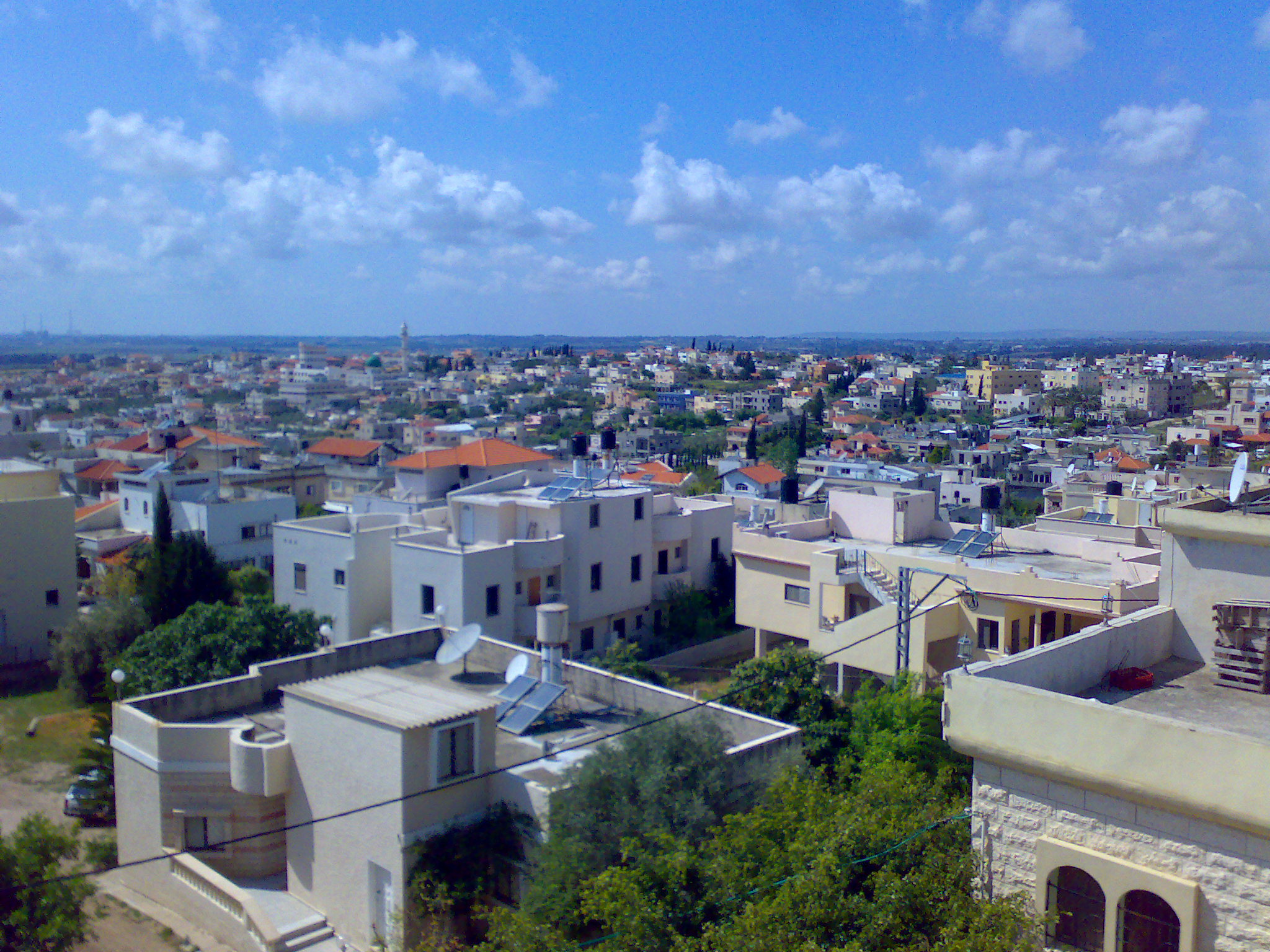 Baqa al-Gharbiyye is separated from its sister city, (or "Baqa East") by the which in this section coincides with the Green Line. [cite web|title=Palestinians:Fenced into Limbo|author=Gidon Remba|publisher=MidEast Web|date=02/08/2004|accessdate=05.11.2007|url=http://www.mideastweb.org/log/archives/00000176.htm] As a result, in one neighbourhood in Baqa al-Gharbiyye, the streets end abruptly with a wall of concrete and barbed wire. [cite web|title=Battling Against Israeli 'Apartheid'|author=Lucy Ash|date=2004-12-23|accessdate=05.11.2007|url=http://news.bbc.co.uk/2/hi/middle_east/4111915.stm]

Earlest documented data about Baqa go back to the 12th century. In [1265] [Baibars] divided tha village of Baqa between [Alam al-Din al-Zahiry] and [Aladdin al-Tankazy] when the villages of Palestine were divided and given to the who fought against the Crusaders and the Byzantines.

Baqa was mentioned in an Ottoman document in 1538, as a five-family small village with 11 non-married people. The first official Ottoman census to count the village was held in 1841, which pointed that Baqa is a home to 380 people. In the same year the first , al-Masjid al-Qadim (The Ancient Mosque), was built in the village and is still used to this day.

British raids on the village during the Arab riots

Just like other Palestinian villages a strict British controlled the village. When the battles reached a peak in 1938 a was declared by Britain and tough collective punishment was imposed. on every village where militiants were found. A British military camp was established near the al-Madrasa al-Foqa School.

In 25th August 1938 a clash took place between British troops and local militiants and resulted in an armed battle which resulted two dead British officers and injuring three militiants. The same day British military inforcement stormed the village and larger battles begun and continued until next day mroning by which British losses raised to three.

The next day, 26th August 1938, the British ordered the villagers to leave homes without taking anything with them and those to refused were taken out by force, and they were driven to a near camp. Later on raids over the village started and continued until evening, leaving a great divastation for such a small village then: most of the wooden homes were burnt and over 70 homes were flattened. After the raids were over the villagers were forced to walk to the Nur al-Shams Camp near . The next day the villagers returned to the village to find out the huge damaged that occurred to Baqa, and the news spread out quickly in the Palestinian cities. This was one of the largest British attacks on a Palestinian village during the riots.

Modern era after the establishment of Israel

According to the 1949 armistice agreement with Jordan Baqa was divided between Israel and Jordan, where the eastern part becomes under Jordanian rule and the larger westerd part becomes under Israeli rule. Only at this point the names "" (Eastern Baqa) and "Baqa al Gharbiyye" (Western Baqa) were born.

A part of the passes through the virtual borders of the city with and Baqa ash-Sharqiyya where a dense shopping area was located with many shops and workshops. The construction of the barrier caused a severe economic and social impact on both sides.

In 2003 the city of Baqa al-Gharbiyye was united with nearly local council of the village to become the city of , as a part of the then finance minister 's economic plan to cut government spendings, despite opposition from the people of both Baqa and Jatt.

Corruption and other peoblems reached a peak in 2006 which forced the interim minister to dissolve the council and appoint a special local governor. By that point reached over 120 million , caused by ineffective collection of es. Over 90 million of the debt goes to the people of Jatt who do not make up more than 20% of the total population.

After dissolving the council, a wide reformist plan was launched with priority for strict tax collection. Soon after the city begun reviving as debt was reduced and repairation and upgrades to the city infrastructure started. Future plans would covert the field area between Baqa al-Gharbiyye and Jatt to an industrial area and open new roards especially to the adjacent interchange with Highway 6 with the city's name.

The ethnic makeup of the city is entirely Muslim , with no ish population and some an and exceptions. See . The city is made up of 51% males an 49% females. Baqa has a population growt rate of 3.1%.

Baqa al-Gharbiyye is considered a commercial and industrial center for nearby towns, villages and es. Most of the economic power of the city comes from St. 574 which passes through the heart of the city.

There are over 400 workshops in Baqa. Industrial zones make up 8.5% of city's area.