John Young (c. 1742–1835) was a British subject who became an important military advisor to Kamehameha I during the formation of the Kingdom of Hawaii. He was left behind by Simon Metcalfe, captain of the American ship Eleanora, and along with a Welshmen Isaac Davis became a friend and advisor to Kamehameha. He brought knowledge of the western world, including naval and land battle strategies, to Kamehameha, and a strong voice on affairs of state for the Hawaiian Kingdom. He played a big role during Hawaii's first contacts with the European powers. He spent the rest of his life in Hawaiʻi. Between 1802-1812, John Young ruled as Royal Governor of Hawaii Island while King Kamehameha was away on other islands. He organized the construction of the fort at Honolulu Harbor. The Hawaiians gave him the name ʻOlohana based on Young's typical command "All hands".[1]

According to his tombstone, he was born in 1742 in Crosby, Lancashire, England. Other sources give his birth as March 17, 1744.[2] His father was Robert Young, of Crosby, Lancashire, and mother Grace. He had two brothers: Peter and James.[3] The Youngs were of Scottish descent.

Young served as boatswain on the Eleanora, an American ship captained by Simon Metcalfe, engaged in the maritime fur trade between the Pacific Northwest and China. Sailing from Cape Cod in 1789,[citation needed] the Eleanora put in at Kealakekua Bay on the island of Hawaii in February 1790. In March Young went ashore to investigate, and he was detained because Kamehameha did not want Metcalfe to learn of an attack on the Eleanora's companion ship, the Fair American. Metcalfe waited for two days, but eventually sailed without Young.[4]

In battles such as the Battle of Nuʻuanu, when the army of Kamehameha conquered Oʻahu, Young had charge of the cannon. He is credited with firing the shot that put an end to Kalanikupule, king of Oʻahu and Maui. At the close of this contest, when Kamehameha was called back to Hawaiʻi island to suppress the rebellion of Namakaeha, Young was left on Oʻahu to adjust the new regime affairs, then with a number of foreigners who also joined Kamehameha at Hawaiʻi island. Beginning about 1800 or 1802, he was appointed as the Royal Governor of Hawaii island after chief Mokuhia, whom Kamehameha had picked, was murdered by a rival.[5] This included his superintendency of tax gatherings when he returned to Kawaihae.[6]

Young acted as interpreter for many English speaking visitors, and sowed the seeds of Christianity in Hawaii. When Captain Vancouver visited the island during the Vancouver Expedition in 1793, he offered to take Young and Davis back to Britain. But they were already content with their island life and refused the offer. Naturalist Archibald Menzies left seeds and plants such as citrus fruit in his care. He helped mediate a treaty with Britain in 1794, and coordinated the building of the first large European-style ships.

In 1803, Richard Cleveland, of the American ship Lelia Byrd, left a mare with foal with Young in Kawaihae. This was the first horse ever seen in the islands, and led eventually to the establishment of Parker Ranch. He took the first horses and cattle to Honolulu in 1809.[1]

Young lived near Kealakekua Bay probably until about 1819, when Kamehameha I died.[7]

Young built the first European-style house on the island of Hawaiʻi, and its ruins are still to be seen at the Pu'ukohola Heiau National Historic Site near the town of Kawaihae. It was made of stone and Young had no tools but a hatchet and a wooden trowel. He made the door with a hatchet, hewing it out of a koa tree slab. He whitewashed the house with lime made from white coral fished from the sea.[8]

Lucy Goodale Thurston, in her story of her life as a missionary in Hawaii, described John Young:

"He had long been a rare example in that degenerate age, of building a hedge about his family and standing in the gap thereof. When occasion offered, he spoke with energy and decision, giving no uncertain sound, well understood by his children and by strangers. By marriage, by deeds and by counsel, he had justly risen to the eminence of a peer with the chiefs of the nation. Saxon blood flowed in his veins. He was Mr. Young, the noble grandfather of our most noble Queen Emma. His descendants all had the blood of chiefs flowing in their veins, for his wives were women of high rank."[9]

He was one of the few close friends to be at Kamehameha's side when he died in 1819 at Kamakahonu.[10]

After the wars, Young returned to Kawaihae on the Big Island and expanded his compound, including building a small European-style fort. There he and wives raised a family and entertained both Hawaiian and western visitors.

His first marriage, in 1795, was to the chiefess Namokuelua of Oahu aristocracy. Their son, James Kānehoa, was an influential member of the court of Kamehameha II. On the king's 1823 visit to England, Kānehoa was entrusted with the official letters of introduction and served as translator. Kamehameha II, his queen and three other chiefs contracted the measles and died abroad. Another son was Robert Young who was born in 1796, sent to school in America, fought for the American side in the War of 1812 and went missing.[10]

About 1805, Kamehameha's niece, the Princess Kaʻōanāʻeha, the daughter of his favorite brother, became the second wife of John Young. This marriage brought him increased recognition and prestige.

Four children were born to John Young's second marriage. Fanny Kekelaokalani Young, his eldest daughter married George Naʻea and gave birth to a daughter, Emma, who would later married King Kamehameha IV. Grace Kamaʻikuʻi Young married Thomas Charles Byde Rooke and adopted her niece Emma. John Kaleipaihala Young Jr. known as Keoni Ana married Alapai and would become one of the only two males to hold the title of Kuhina Nui. Jane Lahilahi Young married Joshua Kaʻeo and gave birth to Peter Kaʻeo, a member of the House of Nobles. Jane also mothered an illegitimate son by Kamehameha III, Albert Kunuiakea who might be the last direct descendant of Kamehameha I.

In 1810, Young adopted the children of his murdered companion Isaac Davis. They were Sally, thirteen years of age; George, 2 or 10 years old; and Betty, seven years of age.

John Young's gravesite at the Royal Mausoleum of Hawaii

During an illness in December 1835, his daughter Grace sent a ship to collect him and his wife Kaʻōanāʻeha. She transported them from Kawaihae on the Big Island to Honolulu, so Rooke could administer a heart medication and keep him under observation. He insisted on bringing his own coffin with him. "When I die, I don't want to leave any question about how I wished my body to be treated," he said. Fear of being murdered and having his body treated for burial in the old traditions, with the chiefs taking his bones to make icons or fishhooks, plagued his painful day and nights. Two weeks after he arrival on Oahu, John Young died at Rooke House in Honolulu on December 17, 1835, at the age of 93 after living in Hawaiʻi for 46 years. Grace sent for the family while the Oahu chiefs planned his funeral. His lands were divided among his children and the children of Isaac Davis whom he had adopted.

His Excellency, J. H. Kapena, Minister of Foreign Relations, on the occasion of the laying of the Cornerstone of The Royal Palace, Honolulu, in 1879, said:

"Here in the premises of Pokukaina was erected the tomb of the departed chiefs and at the entrance of the sacred place was placed the body of John Young, one of Kamehameha's intimate friends. In order that the spot may not be forgotten where a tomb once stood, King Kalakaua has caused a mound to be raised there, crowned with ferns and flowers in memory of those who slept beneath it. Doubtless the memory is yet green of that never to be forgotten night when the remains of the departed chiefs were removed to the Royal Mausoleum in Nuuanu Valley. Perhaps the world had never witnessed a procession more weird and solemn than that which conveyed the bodies of the chiefs through the streets, accompanied on each side by thousands of people until the mausoleum was reached, the entire scene and procession lighted by large kukui torches, while surrounding darkness brought in striking relief the coffins on their biers. Truly we cannot forget the weirdness, the solemnity and the affecting scene afforded by that strange midnight procession." 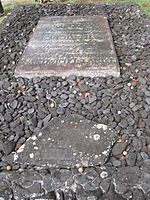 He was interred in the little coral mausoleum, called Pohukaina, on the Iolani Palace ground, on December 18, 1835. Later he was removed to the Royal Mausoleum of Hawaii at Mauna 'Ala in 1866. At the Royal Mausoleum, on a flat, grey stone which covers his grave, is the following inscription:

Beneath this stone are deposited
the remains of John Young
(of Lancashire, England)
The friend and companion-in-war of
Kamehameha.
who departed this life
17 December 1835,
in the 93rd year of his age
and the 46th of his residence
on the "Sandwich Islands"