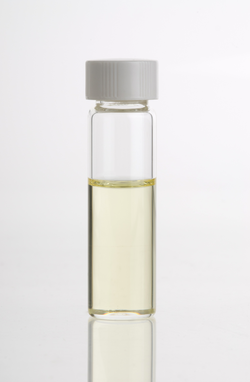 A glass vial of pure essential oil of lavender

Lavender oil is an essential oil obtained by distillation from the flower spikes of certain species of lavender. Two forms are distinguished, lavender flower oil, a colorless oil, insoluble in water, having a density of 0.885 g/mL; and lavender spike oil, a distillate from the herb Lavandula latifolia, having density 0.905 g/mL. Lavender flower oil is a designation of the National Formulary and the British Pharmacopoeia. Like all essential oils, it is not a pure compound; it is a complex mixture of naturally occurring phytochemicals, including linalool and linalyl acetate. Kashmir Lavender oil is famous for being produced from lavender at the foothills of the Himalayas. As of 2011, the biggest lavender oil producer in the world is Bulgaria.[1]

Lavender oil, which has long been used in the production of perfume, can also be used in aromatherapy. The scent has a calming effect which may aid in relaxation[2] and the reduction of anxiety[3] and stress[4]. Lasea capsules containing lavender oil with a high amount of linalool and linalyl acetate, termed Silexan by the manufacturer, are approved as an anxiolytic in Germany.[5] The approval is based on a finding that the capsules are comparable in effect to low-dose lorazepam.[6]

It may also help to relieve pain from tension headache when breathed in as vapor or diluted and rubbed on the skin. When added to a vaporizer, lavender oil may aid in the treatment of cough and respiratory infection.

Lavender oil may also be used as a mosquito repellent when worn as perfume or when added to lotions or hair products.

According to advocates of alternative medicine[who?], lavender oil can be used as an antiseptic and pain reliever[7] to be applied to minor burns and insect bites and stings. However these claims are at best anecdotal and have no basis in fact.

It is also said to treat a variety of common ailments, such as sunburn and sunstroke.[8] It can also be used in massage oil mixtures, which may be effective in the relief of joint and muscle pain, or in chest rub mixtures for the relief of asthmatic and bronchitic spasm. It is also said to treat head lice when used in a hair rinse mixture, or on a fine comb to eliminate nits.One study suggests application of lavender essential oil instead of povidone-iodine for episiotomy wound care.[9]

Some say lavender oil may have played a role in the reduction of advanced mammary tumors in lab rats.[citation needed]

In vitro, lavender oil is cytotoxic as well as photosensitizing. A study demonstrated that lavender oil is cytotoxic to human skin cells in vitro (endothelial cells and fibroblasts) at a concentration of 0.25%. Linalool, a component of lavender oil, reflected the activity of the whole oil, indicating that linalool may be the active component of lavender oil.[10] The result of another study showed that aqueous extracts reduced mitotic index, but induced chromosome aberrations and mitotic aberrations in comparison with control, significantly. Aqueous extracts induced breaks, stickiness, pole deviations and micronuclei. Furthermore, these effects were related to extract concentrations.[11]

However, according to a 2005 study "although it was recently reported that lavender oil, and its major constituent linalyl acetate, are toxic to human skin cells in vitro, contact dermatitis to lavender oil appears to occur at only a very low frequency. The relevance of this in vitro toxicity to dermatological application of Lavandula oils remains unclear."[12]

In terms of phototoxicity, a 2007 investigative report from European researchers stated that, "Lavender oil and sandalwood oil did not induce photohaemolysis in our test system. However, a few reports on photosensitivity reactions due to these substances have been published, e.g. one patient with persistent light reaction and a positive photo-patch test to sandalwood oil."[13]

Oil of spike lavender has also occasionally been used as a solvent in oil painting, mainly before the use of distilled turpentine became common. For instance Francisco Pacheco mentions the use of lavender oil in his book "Arte de la pintura" (1649).

Lavender oil has recently been implicated in gynecomastia, the abnormal development of breasts in young boys. Denver endocrinologist Clifford Bloch hypothesized the link after three boys presented with enlarged breasts. Subsequently, Derek Henley and Kenneth Korach of the National Institute of Environmental Health Sciences in Research Triangle Park, N.C., discovered in lavender and tea tree oil the presence of compounds which both suppress male hormones and mimic female hormones.

Because sex hormone levels normally are low prior to puberty, young boys and girls particularly are sensitive to estrogenic and androgenic compounds. The discovery of the gynecomastia link in boys has led some researchers to suspect lavender and tea tree oils, which are present in various personal care products including shampoos and lotions, may also contribute to the increased incidence of early breast development in girls.

Discontinuation of use of these products resulted in rapid reversal of gynecomastia in Bloch’s young patients.[14][15]

However, the conclusion that the gynecomastia actually was caused by the essential oils in the products used by the three boys are currently being disputed by the Natural Artisan Perfumers Guild and Cropwatch on the claimed basis of insufficient evidence.[citation needed]

The primary components of lavender oil are linalool (51%) and linalyl acetate (35%).[16] Other components include α-pinene, limonene, 1,8-cineole, cis- and trans-ocimene, 3-octanone, camphor, caryophyllene, terpinen-4-ol and lavendulyl acetate. The composition of lavender essential oil as obtained by chromotography: