Cox Models
This article is about the division of Estes Industries. For Cox models in statistics, see proportional hazards models. 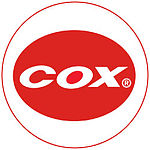 Cox Models, a former division of Estes Industries of Penrose, Colorado, was a multimillion-dollar hobby company, is one of the hobby industry's oldest companies and is noted for its production of miniature model internal-combustion engines.

This company, originally named "The L. M. Cox Manufacturing Co, Inc.," was founded in 1945 by the machinist Roy Cox in Placentia, California. Cox grew up in and around his father's bicycle shop, and he developed an interest in mechanical devices. Cox's first products were wooden pop guns, produced in his home garage. Cox chose wood for his basic material, since metal was scarce during WW II.

When metals became readily available in the United States in 1947, Cox turned his attention to new products, beginning with a diecast metal car. This product was developed into a "whip car", a tethered vehicle which could be manually swung in a circle at high speed. Nitro- and gasoline-powered tether cars with .60 cubic inch miniature engines capable of speeds of 100 mph (160 km/h) were quickly becoming popular. Cox's first contribution to that growing hobby was a cast aluminum midget racer powered by a .15 engine by Cameron Brothers.

Roy Cox retired in 1969, and he sold the company to the hobby conglomerate "Leisure Dynamics". Kites, toy walkie-talkies, and yo-yos were added to the Cox company products. A major step toward participation in the growing radio controled hobby business happened in 1976 with the acquisition of the radio manufacturer "Airtronics".

By 1983, Leisure Dynamics was facing bankruptcy. Their engineer William Selzer, the designer of the "Babe Bee" .049 aircraft engine, joined with a local businessman to purchase the Cox company. The new company, Aeromil Engineering Company, changed the name of the company from Cox Company to Cox Hobbies, Incorporated, in 1984. Growth of the company continued, but its factory space became fragmented since the operations were spread out over a number of leased buildings. This prompted a move to a consolidated facility in Corona, California, in 1990.

In January 1996, a leading model toy rocket manufacturer, Estes Industries, purchased Cox Hobbies, Incorporated, and relocated operations from Southern California to the Estes facility in Penrose, Colorado. This signaled a major change in marketing direction for the new company, now known as Cox Models. A great many new products were aimed towards a mass market and they were sold in large chain stores and discount stores.

Since then, Cox has returned to its hobby roots and is once again offering its products through hobby stores. The product line came to include a line of radio-controlled model aircraft.

Some of the former Cox model train line is now sold by the Wm. K. Walthers company.

In the 1950s and 1960s until recently, Cox has produced a line of hobby-oriented models of cars, airplanes, and other vehicles. The most noted are the .049 cubic-inch displacement gasoline-powered models, controlled by line or by radio. 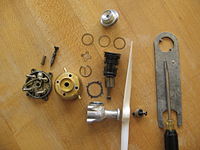 Cox reed valve engines are nearly indestructible. The needle valve and carburettor are behind the cylinder where they are protected, and the crank case, cylinder and fuel tank are all machined from forgings, rather than weaker castings. The tank back plate/carburettor is a zinc alloy casting, or later a plastic casting, but crash stresses are already well distributed by the time they reach it. The claim of dimensional tolerance, in the advertisement shown above, is justified by the facts that the high production volume engines need no break-in, except for a one-minute rich run, and any piston will fit into any cylinder that is the same size.

An example of an 0.049 cubic inch (0.8 cubic cm.) reed valve engine is shown on the right, taken apart (with the tools shown) and assembled. Except for the Golden Bee fuel tank, this engine was bought used in 1979. The starter spring has been removed, allowing the use of a left hand screw propeller. Some unneeded metal has been removed from the front of the crank case.

Below the Bee is a new Sure Start. There are several superficial changes, including that the shape of the reed is different and it is now made of steel. The most substantial change (not visible) is in the carburettor, which now has a large brass spray bar / barrier crossing the round barrel aperture, with a jet hole in its back center. The older carburettor has an abrupt increase in the diameter of the barrel (visible), with the jet at the top of the larger barrel section.

In addition to 0.049 cubic inch (0.80 cc) variants such as these, the 0.020 cubic inch (0.33 cc) Pee Wee was also sold, in large quantities and over several decades, in ready to fly or run models and separately to power other models.

The TDs (Tee Dee or Thimble Drome) had very high power for their size and ranged from 0.01 in³ (0.16 cc) to 0.09 in³ (1.5 cc) displacement. They were for serious hobbyists and too temperamental for mass markets. Note, on the Tee Dee shown, that light shows through the external ports, under the piston (sub induction). This engine cannot run properly with a muffler. Sub induction served to allow extra air into the cylinder at high engine speed. This increases the charge of mixture and makes the ignition timing track to engine speed to maintain power over a wider range of rpm. The cylinder head shown is of the low compression Bee type.

Medallions were milder than the TDs but better performers than the reed valve engines.

On January 6, 2009, the Estes company closed down its Cox division and sold the engines, spare parts, and tooling to various companies.