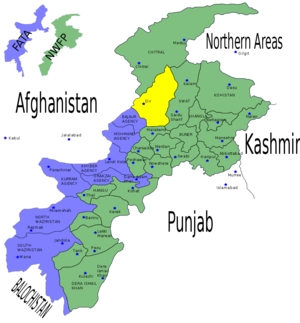 Lower Dir is one the 24 districts of , . Dir is an area of the North West Frontier Province that has been split into two districts, and Lower Dir districts.

The district is 1,582 square kilometres in area [ [http://www.nwfp.gov.pk/AIS-page.php?DistId=15&DeptId=1&LangId=1&pageName=Main NWFP Government website section on Lower Dir] ] and formed part of the , lying along the border between and . Almost all of it lies in the valley of the which rises high in the at Lat. 35.45 and joins the near , where the district is usually entered, at Lat. 34.40. Apart from the tehsils of Adenzai round Chakdara and Munda in the south-west, Dir is rugged and mountainous with peaks rising to 16,000 feet in the north-east and to 10,000 ft. along the watersheds with Swat to the east and Afghanistan to the west. The only motor road to Chitral reaches 10,234 ft at the . , however, the district headquarters, lies at only 2,700 ft. twice the altitude of Peshawar but much lower than the traditional and eponymous capital of Dir at the foot of the . Except for them and a number of rapidly growing bazaar towns along the main roads the population is rural, scattered in more than 1200 villages over the plains of and and the deep narrow valleys of the Panjkora and its tributaries. Of these the largest are , , , and . Dir district was officially split into Upper Dir and Lower Dir in 1996. Until 2000 as funds were not available to provide the accommodation needed at Dir town by government depart­ments at a district headquarters, both districts continued to he administered by a single deputy Commissioner stationed at .

The district is administratively subdivided into two s which contain a total of 13 Union Councils: [ [http://www.nrb.gov.pk/lg_election/union.asp?district=69&dn=Lower%20Dir Tehsils & Unions in the District of Lower Dir - Government of Pakistan] ]

The district is represented in the provincial assembly by four elected MPAs who represent the following constituencies: [ [http://www.panwfp.gov.pk/index.php/members/bydistrict/en/9/67 Constituencies and MPAs - Website of the Provincial Assembly of the NWFP] ]

The literacy ratio of the district among the population aged 10 years and above is 29.90 percent which has increased significantly since 1981 when it was just 10.16 percent. The male literacy ratio is higher i.e. 48.76 compared to 12.25 percent for females, according to census report 1998.

Dir District is located in the north of North West Frontier Province. Dir has a long border with Afghanistan. Dir is considered the most sensitive area in Pakistan in term of religious extremism. Religio-political parties have good roots in Dir like JUI, JI and TNSM etc. The development indicators in Dir have always been discouraging. Dir was ruled by a princely dynasty till 1969. There were limited facilities for education, health, road, transportation and communication for the inhabitants of the Dir State.

Dir District was merged into Pakistan under a presidential order of the president of Pakistan. Dir was declared as Dir Agency, till 1969. It was declared as District running under Provincially Administered Tribal Area (PATA) till 1996. District Dir was bifurcated into Dir Upper and Dir Lower in 1996. District Dir Lower is composed of two sub divisions i.e. Timergara and Jandool (Samarbagh) Sub-divisions. During July/ August the provincial government shifted three union councils of Dir upper to Dir lower.