The Prince of Wales Fort is a historic fort on Hudson Bay across the Churchill River from Churchill, Manitoba, Canada.[1]

The European history of this area starts with the discovery of Hudson Bay in 1610. The area was recognized as important in the fur trade and of potential importance for other discoveries. The fort is built in a European "star" shape.

This fort began as a log fort built in 1717 by James Knight of the Hudson's Bay Company and was originally called the "Churchill River Post". In 1719, the post was renamed Prince of Wales Fort, but is more commonly known today as Fort Prince of Wales. It was located on the west bank of the Churchill river to protect and control the Hudson's Bay Company's interests in the fur trade.

Construction on the fort, a structure still standing today, was started in 1731 near what was then called edit] In battle

In 1782, with only 39 (non-military) men manning the fort, three French warships, led by Jean-François de La Pérouse, took it over without a single shot being fired. The fort's Governor at the time, Samuel Hearne, having quickly recognised the numerical and military imbalance, surrendered immediately. The fort returned to the HBC in 1783 after the French had partially destroyed it. Thereafter, its importance began to wane with the decline in the fur trade although the post was refounded a little way up the river. 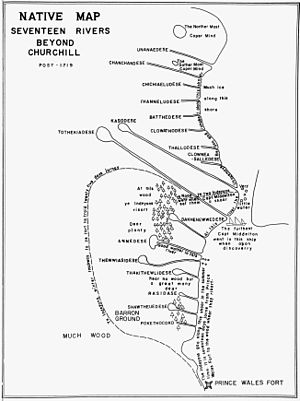 None of the original structures are intact with roofs long deteroriated:

The courtyard is intact and all other exposed areas covered by grass.

When the Hudson Bay Railway to Churchill was completed in 1929, the labour and equipment used for the railroad construction was then used to restore the fort in the 1930s. Extensive and at times unfortunate restoration work was also carried out in the 1950s. There is no proper historical or archaeological study of the fort and its remains in spite of its importance to western Canadian history.