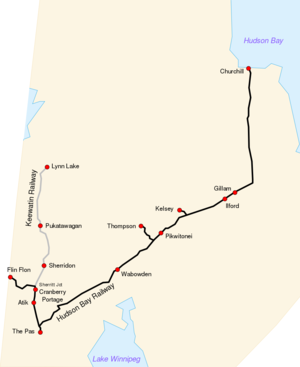 HBRY was formed in July 1997 to purchase former (CN) trackage running north from CN trackage at The Pas, MB on two branches, one to Flin Flon, MB and on to Lynn Lake, MB, the other to Thompson, MB and on to the port of Churchill, MB on . Operations began on , and the company is owned by railroad holding company .

At the same time, OmniTRAX also took over the operation and marketing of the from the federal government's Department of Transport. Previous owner CN had limited tonnage on these lines as a result of the light rail and poor track base; however OmniTrax has been able to successfully operate heavier rail cars and longer trains in recent years without difficulty, resulting in increased business to the Port of Churchill and from various mines and pulp mills.

The original Hudson Bay Railway line was built in stages north from The Pas after a railway bridge was constructed over the in 1910-1911 by the (CNoR). It was meant to go to a major new shipping harbour on Hudson Bay. Although initial surveys were done to both ports of Churchill and Port Nelson, it was decided to proceed to Port Nelson in 1912. But when the harbour project in Port Nelson was abandoned, construction on the railway came to an end.

Following the CNoR bankruptcy in 1918 and creation of (CNR), the federal government undertook to complete the Hudson Bay Railway; this time to Churchill. Political interference, financing difficulties, and engineering challenges by the large amount of and frequent rock outcrops on the led to inevitable delays. The line to tidewater was completed March 29, 1929.

CNR subsequently built resource railways from The Pas to Flin Flon, opening in 1928, followed by an extension on this line from , to Lynn Lake, opening November 9, 1953.

On , , heavy rains washed out part of the railroad between and Pukatawagan; all service over the line, including trains 290 and 291, was suspended while repairs took place. [VIA Rail Canada (, ), " [http://viarail.ca/cgi-bin/AffichageWebComm?Commande=select&langue=en&IDX=2&pk_webcomm=543 Hudson Bay Railway closes line - VIA service form The Pas to Pukatawagan temporarily cancelled] ". Retrieved , .] Service was restored on , , two days ahead of initial expectations. [VIA Rail Canada (, ), " [http://viarail.ca/cgi-bin/AffichageWebComm?Commande=select&langue=en&IDX=2&pk_webcomm=545 VIA resumes service between Churchill and Winnipeg] ". Retrieved , .]