After WW2, large numbers of German Mauser 98k were confiscated by Norwegian forces. Most of the rifles were re-barrelled to .30-06, later to 7.62 NATO, and used as normal service rifles, but a number of Mauser 98 actions were used as the basis for building both military sniper and civilian target rifles at Kongsberg Våpenfabrikk. Target shooting is very popular in Norway, and stocks of the Krag-Jorgensen M1894 were scarce after the end of the war. The Mauser rifles were available and very well suited to conversion into target rifles for use by the Norwegian DFS. The M59, M67 and the Krag-Jørgensen were the official target rifles of the Norwegian DFS until the adoption of the Sauer 200 STR in the 90's.

Kongsberg Våpenfabrikk introduced the M59 (also denoted KV59) in 1959, first chambered in .30-06, but shortly afterwards production was changed to accommodate the new 7.62 NATO round, and M59 rifles chambered for the 7.62 NATO were denoted M59F1. The M59F1 served first as a sniper rifle for the regular armed forces. After the NM149 was introduced, the M59F1 served with the Norwegian Home Guard (Heimevernet) until the 1990s. It was also used as a civilian target rifle, having the advantage over the Krag-Jørgensen M1894 that it did not suffer from changing point of impact in rainy weather. Thus, many shooters had a Krag-Jørgensen for the sunny days and one Mauser for rainy days.

Kongsberg Våpenfabrikk used German Mauser 98k actions for the manufacture of the M59. The picture shows a civilian M59.

Closeup of the action and re-profiled bolt handle:

Old markings were removed, and the front receiver bridge was opened to accommodate loading of the somewhat longer (compared to the 7.92x57 mm Mauser) .30-06 cardridge,

This is also found on the M59 rifles which were re-chambered to the 7.62x51 NATO cartridge. On the civilian version, only the extractor claw was blued, while the rest of the bolt was polished, while on the army issue M59F1, the whole bolt was blued.

The magazine follower on the 98k would lock the bolt's forward motion on an empty magazine. This feature was retained on the M59:

The half-length cleaning rod was screwed into the fore-end. Two to three of these were required to assemble a rod of sufficient length: 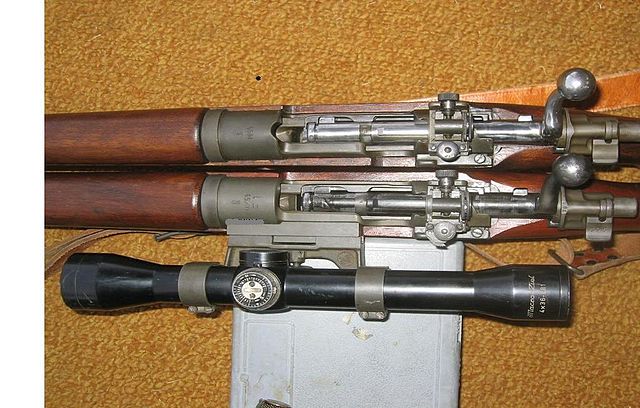 The M59 was redesigned in 1967, hence the M67, and was made using a captured World War II German M98 action, fitted with a heavy target stock and barrel. It was usually fitted with Busk diopter sights. It was chambered in 6.5x55, 7.62 NATO and in .22 LR as a single shot.