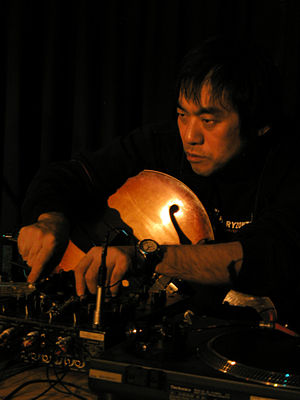 He first came to international prominence in the 1990s as the leader of the noise rock group Ground Zero, and has since worked in a variety of contexts, ranging from free improvisation to noise, jazz, avant-garde and contemporary classical. He is also a pioneering figure in the EAI-scene, and is featured on important records on labels like Erstwhile Records. He plays guitar, turntables, and electronics.

Otomo studied at the Meiji University from 1979, where he studied ethnomusicology, concentrating on the Japanese pop music of World War II and the development of musical instruments during the Chinese Cultural Revolution. Samples of instruments and music from this period are found in several of his works.

He played in rock bands while at college, but turned to improvisation after discovering free jazz and free improvisation musicians like guitarist Derek Bailey, saxophonist Kaoru Abe and guitarist Masayuki Takayanagi (from whom he took lessons).

In 1981, Otomo began improvising in the first Japanese house club in Tokyo (Jazu Kissa), performing on guitar and also using tapes and synthesizer devices, like Roland drum machines. He is considered the father and the pioneer of house music in Asia.

For much of the 1990s his main project was Ground Zero, a large group founded in 1990 with an ever-changing lineup. They played music in a variety of styles, perhaps best described as noise rock with an experimental edge and a heavy emphasis on sampling. In Consume Red (1997), for example, a sample of Korean musician Kim Seok Chul playing the hojok is continuously repeated throughout the single hour-long track while the band improvise around it, becoming louder, and eventually swamping the sample out.

Ground Zero was disbanded in 1998. Towards the end of that group's life, Otomo formed two electronic free improvisation groups: Filament with Sachiko M, and I. S. O. with Sachiko M and Yoshimitsu Ichiraku. These groups abandoned the frenetic postmodern pastiche of Ground Zero, and emphasized small gestures and low volume. The music contained no samples, being made of sine waves and electronic clicks and hums. Though he continued using turntables, Yoshihide largely stopped using gramophone records as a sound source, instead manipulating the turntable itself with a wide variety of objects and contact microphones.

Records released under his own name include Cathode (1999), which includes pieces that are sine wave-based or made from samples, and Anode (2001), a group improvisation where the players are constrained by certain pre-determined rules (similar in some respects to John Zorn's game pieces). Featured in both pieces are Gagaku instruments, such as the Shō, futozao-shamisen, and koto.

In 2003, Otomo worked with Bill Laswell and Yasuhiro Yoshigaki to record a four song LP Soup. Then in 2004 a 2CD live set was released as Soup Live.

In 2006, Otomo and Laswell again teamed up this time with Tatsuya Yoshida to release Episome.

Otomo also has a quartet with three other musicians from different parts of Asia. Called FEN (Far East Network), the quartet comprises Otomo, Yuen Chee Wai (Singapore), Ryu Hankil (South Korea) and Yan Jun (China). FEN debuted in Mimi Festival in Marseille 2008 and has been performing regularly in many countries.

There is also an album by Kenny Millions & Otomo Yoshihide, Without Kuryokhin, released in 1998 and dedicated to the memory of Russian jazz and experimental musician Sergey Kuryokhin.