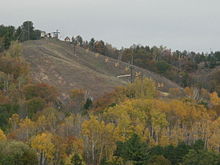 Mont Ripley is a ski hill in located in Michigan's Upper Peninsula. It is owned by Michigan Technological University. It was founded in the early 1900s (by Fred Lonsdorf[1]) and has since grown to one of the premier ski hills in the American Midwest. With the addition of snow making in 2000, the season has been extended from late November to late March or early April.

Mont Ripley is known for its challenging terrain and spectacular views of Houghton, Portage Lake and the Huron Mountains. It is also particularly popular with racers.

In 2006, a new building was built to ease congestion in the main chalet. The new chalet has a gas fireplace and added seating, as well as more lockers. It is mainly used for special events such as races and parties.

Mont Ripley also purchased eight more snow making guns to add to their capability to get all the runs open earlier in the season.

Also in 2006, a second chair lift, dubbed the "Copper Hoist", was purchased and was built on the east side of the hill in 2007, making it easier for skiers and snowboarders to use those runs, raising the lift count to three (2 chair lifts and one t-bar).

Hill modifications through the years

Mont Ripley has been an important part of Michigan Tech since the early 1930s’. It has been an integral part of Houghton-Hancock life since then. It has gone through many changes throughout the years.

In respect to the college, skiing was made a varsity sport at MTU in the fall of 1941.

A few years later in 1945 the Michigan College of Mining and Technology and the Quincy Mining Company reach an agreement where the college rents part of the land owned by QMC for $1.00 a year. The main reason for this lease was to expand the hill and to put up new structures such as ski tows.

In 1948 another big change came to Mont Ripley. They put up new electric lights so they could offer night skiing to their customers. This happened with six 1500 watt bulbs that lit the hill from the tow line.

In 1965, the new t-bar lift begins construction. Later in this year, a contract was awarded to W.F. Milford& son to build the new chalet at the base of the hill.

In 1981 the new double seat chair lift is now up and running with a capacity of 1100 skiers per hour. The new lift is located to the west of the t-bar.

In 1997 the new lighting system is complete, it will allow for night skiing every day of the week.

In 2007 the newest lift is constructed to the east of the t-bar, it is another two seater and is named the copper hoist [2])