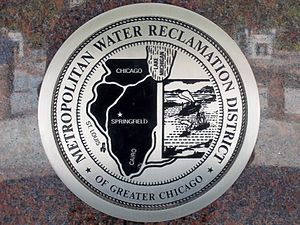 The Metropolitan Water Reclamation District of Greater Chicago (MWRDGC), originally known as the Sanitary District of Chicago is a special-purpose district, chartered to operate in northern Illinois since 1889. Although its name may imply otherwise, it is not a part of the City of Chicago's local government, but an independent agency of state government with an elected Board of Commissioners. MWRDGC's main purpose is the reclamation and treatment of wastewater and flood water abatement in Cook County to protect the health and safety of citizens and of area waterways. Perhaps its most notable achievement is the reversal of the flow of the Chicago River in 1900. 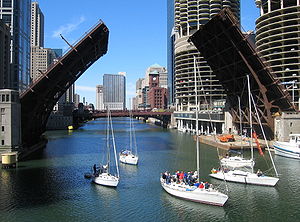 Originally established as the Sanitary District of Chicago, the MWRDGC has played a vital role in the history and health of the city. The Sanitary District Enabling Act of May 29, 1889, established the District with the purpose of managing water supply and wastewater issues.[1] Two important early projects included the reversal of the Chicago River, designed to carry waste water away from Lake Michigan, and the construction of the Chicago Sanitary and Ship Canal which aided in the flowage of water out of Lake Michigan. The canal also allowed for larger commercial vessels to move from the Great Lakes to the Gulf of Mexico by way of the Illinois and Mississippi rivers.

The District's territory covers approximately 91% of land area and 98% of the valuation of Cook County, Illinois; and, unlike other sanitary districts, the district has the power to operate facilities outside its boundaries.[4] It serves an area of 883 square miles (2,290 km2) which covers the City of Chicago and 125 suburban municipalities. The District’s 554 miles (892 km) of intercepting sewer mains are linked to approximately 10,000 local connections.[5]:151-152 Over 2,100 people are employed by the District.

The District operates the largest wastewater treatment plant in the world, the Stickney Water Reclamation Plant in Stickney, Illinois, in addition to six other plants and 23 pumping stations. The District treats an average 1.5 billion US gallons (5,700,000 m3) of wastewater each day. It also shares responsibility with the Army Corp of Engineers for the Chicago Area Water System (CAWS), including the Chicago Sanitary and Ship Canal and approximately 76 miles (122 km) of waterways, part of a national system connecting the Atlantic Ocean, Great Lakes, and the Gulf of Mexico.[5]:14

The District oversees one of the largest civil engineering projects ever undertaken--the Tunnel and Reservoir Plan, better known as the "Deep Tunnel Project." It includes over one hundred miles of tunnels, 9 to 33 feet (10 m) in diameter each part of an extensive flood mitigation and pollution control project.[6] Since 2005 the District has been responsible for stormwater management for all of Cook County and some areas outside of the District’s boundaries.[7]

The District is governed by a nine-member Board of Commissioners, elected at large for six-year terms. Terms are staggered so that three commission chairs are open every two years. The commissioners serve on a part-time basis and receive salaries of $50,000 to $70,000 based on years of service.[8] Commissioners act as the District’s legislative branch establishing policies and procedures for meeting the goals of the District.

Biannually the board elects from its members a President, Vice President, and Chairman of the Committee on Finance.

The District’s Treasurer, its chief financial officer, reports directly to the Board. The Treasurer is charged with maximizing investment interest, issuing bonds to meet capital requirements, managing any debts, and providing general financial management.

In the event of a Board vacancy the Governor of Illinois appoints a replacement member who serves the remainder of the term.[9]

Public meetings are held twice per month (except during July and August) in the board room at 100 E. Erie Street, Chicago, IL. An electronic copy of the agenda is available via the District’s website about three days prior to each meeting.

At least one public hearing is held between 10 and 20 days after new tentative budgets are made available to the public.