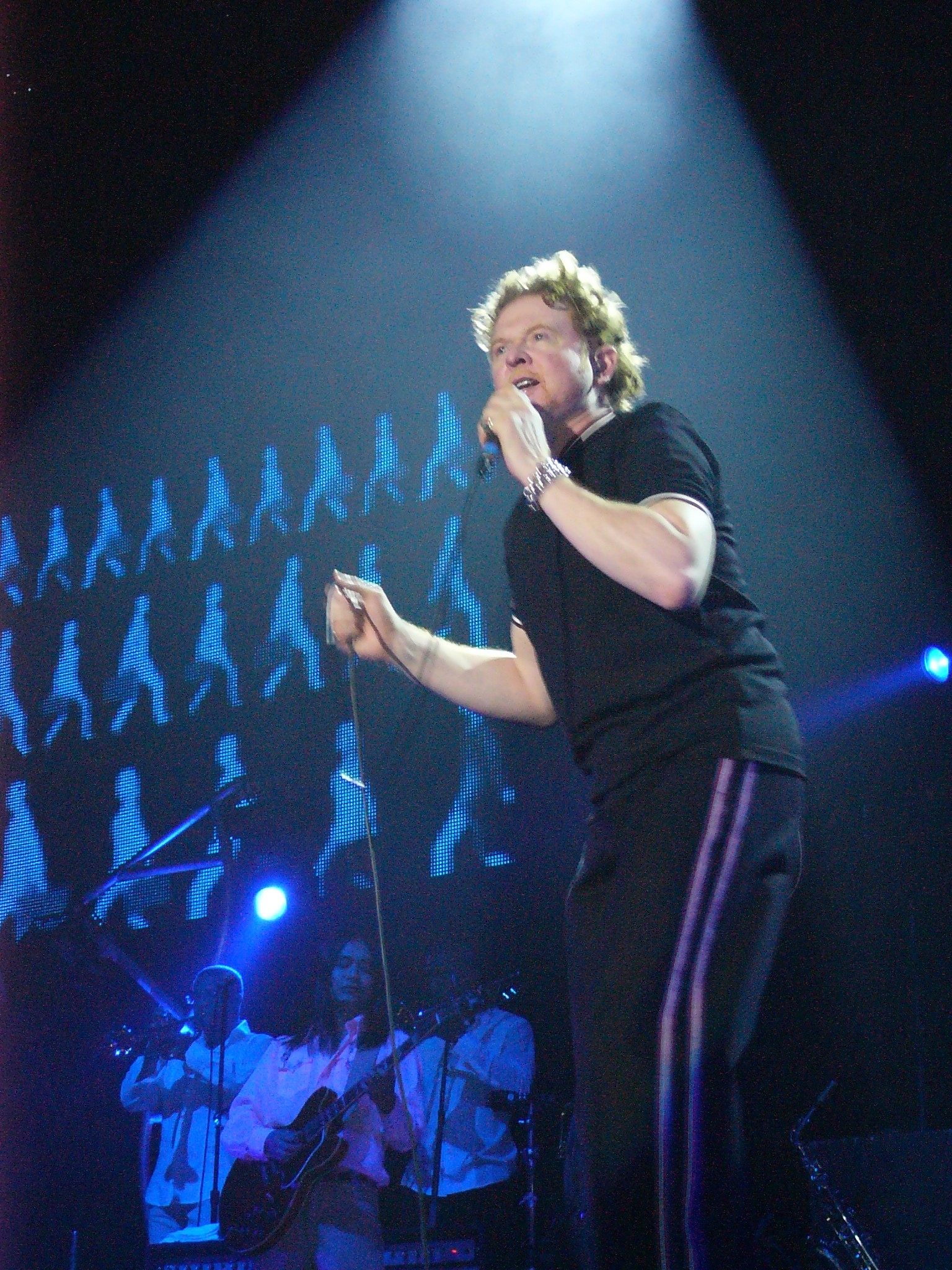 Simply Red is an English pop band. Their style draws influences from pop, rock, jazz, , and .

Simply Red's roots originate from the 1976 gig at the Lesser Free Trade Hall in . Manchester art student was one of the many young music fans present, along with original members of , and , who were inspired to form a band after witnessing that gigFact|date=May 2008). The first incarnation of the band was a punk group called The Frantic Elevators. This band existed for 7 years, with limited releases on local labels, but split in 1984 with only limited local attention and critical acclaim for their final single, "".

After the demise of The Frantic Elevators, Hucknall linked up with manager Elliot Rashman. By early 1985 Hucknall and Rashman had assembled a band of local session musicians and began to attract record company attention. Around this time the group adopted the name Simply Red (after Hucknall's nickname, which denoted hair colour, football allegiance to Manchester United and left-wing political affiliationFact|date=October 2007). They signed to Elektra in 1985, with the somewhat changeable line-up of Hucknall, Tony Bowers (bass), Fritz McIntyre (keyboards), (brass), Sylvan Richardson (guitar) and Chris Joyce (drums).

Their first single, released in 1985, was "", a cover of a soul standard originally recorded by . This single had big international success, reaching the and Irish Top 20, later the American, French and Dutch Top 30, and the Italian Top 5, beginning a successful career in Italy, sometimes more successful than in the UK. Their debut album, "Picture Book", was also released in 1985.

In 1986 the band re-recorded a song that the Frantic Elevators had recorded earlier, "Holding Back the Years", in a more accessible pop style, which was this time a major hit, peaking at #1 in , #2 in , #3 in the , #20 in Italy and later #1 in the , establishing Simply Red as a household name. The song remains one of the band's most recognized works. The album began to sell more copies, and became an international hit album.

Their second album, 1987's "Men and Women" saw the band adopting bowler hats and colourful suits instead of their earlier ragamuffin look, and the introspection and social commentary of their debut replaced by a sound with funk influences.

With their third album "" in 1989, Simply Red adopted a yet more mainstream populist sound aimed for commercial rather than critical success, typified by their cover of 's pop classic "If You Don't Know Me By Now", which became their second U.S. #1 hit and one of the biggest singles of the year internationally; and their greatest success until now. Hucknall was by this time an international superstar, being photographed with models and Hollywood celebrities. This seemed to harm the band's coherence as a unit, with Hucknall declaring in 1991 that Simply Red was "essentially a solo project".

The band's popular career peaked later that year with the release of "Stars", which became the best-selling album for two years running in and the UK (though notably had far less success in the US than their previous albums). "Stars" mixed Hucknall's anti-Thatcherite political lyrics with an easy-listening lounge-jazz sound, apparently to avoid alienation of their existing fanbase. It was featured on the soundtrack of the 1995 movie .

After touring and promoting "Stars" for two years, Simply Red returned in 1995 with "Fairground", a dance-influenced track featuring prominently a sample from 's Goodmen project. A massive radio hit, "Fairground" went on to become the band’s first British #1, amid critical panningFact|date=January 2008. Its parent album "Life" sold more than a million copies in the UK alone, making it the fourth-biggest seller of the year. The band followed this up with cover heavy "Blue" in 1998 and "". Subsequent releases have mostly been greatest-hits collections, although the band did release "Home" in 2003, a mixture of original songs and covers, including a version of song "You Make Me Feel Brand New". "Simplified" followed in 2005, mainly an album of stripped down versions of their Classic hits.

Simply Red will perform a greatest hits show on December the 3rd, in support of their newest Greatest Hits album.

Mick Hucknall announced that the band were due to split in 2010, after a farewell tour, starting in early 2009, ending in 2010. [ cite web|url=http://entertainment.timesonline.co.uk/tol/arts_and_entertainment/music/article2732946.ece|title=Simply Red splitting up after 25 years|accessdate=2007-10-24|publisher=] cquote|"I've kind of decided that the 25 years is going to be enough, so I intend that the 2009 will be the last Simply Red tour."

"I've just recorded an album that is a tribute to Bobby Bland, a blues and R'n'B artist. It's a solo project and I've really enjoyed it so much that I feel the time has come now to just put a book-end to the story and the album Stay will be the last Simply Red studio album."