is a ring road build by the Malaysian Public Works Department (JKR) to connect neighborhoods near the boundary of Federal Territory of Kuala Lumpur and Selangor. Altogether, the 35 km (22 mi) of the entire system consists of Federal Route

(from Sunway Interchange to Sri Petaling Interchange), however Kuala Lumpur Middle Ring Road 2 generally refers to Route 28 since Route 28 occupies about two-thirds of the system.

The Kilometre Zero of the Kuala Lumpur Middle Ring Road 2 is located at Sri Damansara Interchange. At the first kilometre at the interchange, it is connected with the Federal Route

. The Kepong Flyover diverts the MRR2 from the Federal Route

At Gombak, the MRR2 overlaps again with the Federal Route

ends at Sri Petaling Interchange, where it proceeds as the Shah Alam Expressway

Construction of this ring road were divided into 3 phases. These sections include Bandar Sri Damansara-Kepong-Batu Caves-Gombak, Gombak-Ulu Klang-Ampang and Ampang-Pandan-Cheras-Sri Petaling phases. It is divided into 12 packages costing RM 880 million.

The construction of the MRR2 includes the acquisition and upgrades of several major roads as follows:-

During the construction of the MRR2. The highway was constructed at the squatter area between Ampang, Pandan Jaya, Pandan Indah and Cheras on 1990s.

Beam cracks on the Kepong Flyover 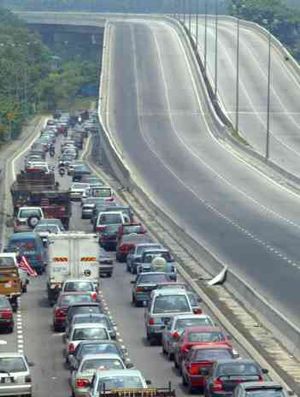 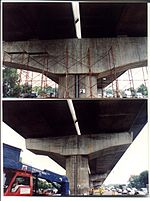 Notice that there are some strange grouted vertical cracks

Residents of the neighborhood of Kepong expressed their fear about the safety on the Kepong Flyover which was reported to be faulty as 31 of 33 pillars supporting the flyover were reported to have obvious cracks. At some pillars and tiers, there were more than 7000 cracks detected. Public concern about the safety issues at Kepong Flyover was due to the risks faced by at least 4,300 motorists using the flyover at a time. Investigations were carried out by 4 different parties, namely Maunsell, Sharma & Zakaria (the designer), Köhler & Seitz Engineering Services (appointed by the contractor), Halcrow Consultants Ltd. (appointed by JKR) and Leondhardt Andrä und Partner (LAP). Meanwhile, the Kepong Flyover was closed to traffic and then reopened with only 4 out of 6 lanes. On August 10, 2004, the Works Minister, Dato' Seri S Samy Vellu, reminded the public that the cracks were not due to design flaw and "nobody can simply open their mouth and suggest it is design flaw" (Bernama 10 August 2004). However, findings from Halcrow Consultants Ltd. suggested the design did not comply with the requirement of BS5400, the improper anchoring of the column rebar to the crossbeams and the formation of ettringite (Delayed Ettringite Formation) were responsible for the cracks and were finally accepted by the ministry (Source: New Straits Times, 1 October 2004).

On 4 February 2006, the Kepong Flyover was closed to traffic from 10:30 am in the morning after serious damages on the flyover was confirmed.

Many complaints arrived about the damages on MRR2. Traffic jam also has rose due to the uncompletion of the MRR2 (see right).

On 8 December 2006, the Kepong Flyover was reopened to all traffic. (Source: Utusan Malaysia, 9 December 2006)

On 3 August 2008, Kepong flyover was closed to all traffic after three of the eighteen carbon fibre panels on pillar 28 had peeled off, photo [1]. Interestingly enough, pillar 28 is where the German consultant Leonhardt Andrä und Partner (LAP) did the repair works as a sample for Malaysian contractor to follow. This is the third time the 1.7-km MRR2 Kepong flyover has been closed because of cracks.[2]