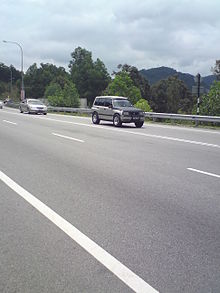 , the main trunk road of the central of Peninsular Malaysia.

The road was constructed by British on 1920s.

At most section, the Federal Route 51 was built under the JKR R5 road standard, allowing maximum speed limit of up to 90 km/h.

The section of the Federal Route 51 from Paroi to Ulu Bendol known as Jalan Bukit Putus is notorious for its narrow and dangerous sharp corners. Construction of the new bypass replacing the old narrow road started on 2006 and it was completed in the early 2009. On August 2009 the bypass is now opened to traffic.