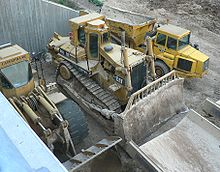 The Caterpillar D9 is a large track-type tractor designed and manufactured by Caterpillar Inc. Though it comes in many configurations it is usually sold as a bulldozer equipped with a detachable large blade and a rear ripper attachment.

The size, durability, reliability, and low operating costs have made the D9 one of the most popular large track-type tractors in the world. The Komatsu D275A is one of its most direct competitors.

In 1965, west coast businessman Buster Peterson hooked up a pair of D9Gs to pushload the largest wheel tractor scrapers built. In 1986 Caterpillar bought the rights to this concept and thus the 770 hp (570 kW) DD9G was created (D stands for Dual D9G). Peterson also built the first SxS D9G which has two D9Gs side-by-side, pushing a 24-foot (7.3 m) wide bulldozer blade.

In 1969, Caterpillar introduced this new SxS D9G. In 1974, the improved 410 hp (310 kW) D9H was introduced to replace the D9G. The D9H is still the more powerful conventional track-type tractor in company history. The DD9H and the SxsD9H would soon follow.

The D9 is the real star of the 1974 ABC cult classic movie "Killdozer".

In 1980, the 460 hp (340 kW) D9L was introduced. The unit had the same elevated drive sprocket undercarraige that the larger D10 had. Between 1970-71 a D9G was built with an elevated drive sprocket undercarriage. A picture of one can be found on page 95 in a book called "Caterpillar Chronicle" by Eric Orlemann. The D9 has undergone several generations of engineering enhancements. Each new model is denoted with an English letter added to D9 like D9E, D9G, D9H, D9L, D9N, D9R, and the current D9T.

The D9's primary working tools are the blade, affixed to the front and controlled by six hydraulic arms, and the optional ripper, which can be attached to the back. The blade is mainly intended for earthmoving and bulk material handling: pushing up sand, dirt, and rubble. It also can be used to push other heavy equipment such as earthmoving scraper pans, and in military applications, main battle tanks. The dozer blade usually comes in three variants:

Like many other bulldozers, the D9 can be fitted with different blades (such as size-9 SU blade and Universal blade) or other devices such as mineplows.

The rear ripper is intended for use in loosening rocky ground and ripping out larger stones. It can also break frozen ground and excavate small ditches. The ripper can be replaced with a multi-shank ripper, allowing the bulldozer to comb the ground.

The size, power and weight of the larger track-type tractors dictate that they are used primarily for major projects. The D9 is most commonly found in use in construction, forestry, mining, waste, and quarry operations. 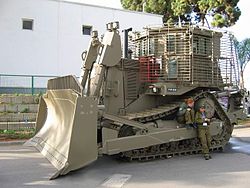 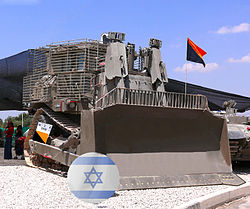 Caterpillar Inc. does not manufacture a military version of the D9 per se, but the attributes that make the D9 popular for major construction projects make it desirable for military applications as well, and in this role - with Israeli modifications and armor - it has been particularly effective for the Israel Defense Forces (IDF) and later for the United States armed forces (the Marine Corps and the US Army) in Iraq.[1]

The Israeli Engineering Corps used armored versions of the D9L, D9N and D9R to clear booby-trapped areas, open routes, rescue stuck armored fighting vehicles and build sand mounds.[citation needed] During the Al Aqsa Intifada D9 bulldozers were used to demolish houses under fire, as the dozers withstood massive IEDs (some of 200 kg and even 500 kg of explosives) and even deflected RPG rounds and were impervious to machinegun fire.[2] The armored D9 bulldozers were cited by experts as one of the key factors for the relatively low casualties of the IDF in urban warfare.[3] However, while Israel saw the utilization of bulldozers as a security necessity, it drew controversy for the destruction it caused to Palestinian property (mainly the destruction of Palestinian houses), especially in Rafah and in Jenin (during Operation Defensive Shield).

The family of Rachel Corrie, an American who was killed with a Caterpillar tractor while protesting Israeli military action in Gaza, filed a lawsuit against the IDF and Caterpillar, but it was rejected by the US court. ISM eye-witnesses claim that the bulldozer deliberately ran over and crushed Corrie, while IDF military police investigation found that the driver did not see Corrie and concluded her death was an accident. [5]

The US army used D9 bulldozers to clear forest in the Vietnam war but after the war they were replaced with smaller and cheaper Caterpillar D7G bulldozers. D7G dozers are still very common in US combat engineering battalions, but there is a resurgent high demand to replace the lighter D7Gs with the newer and more heavily armored D9s.