The Central Animal Liberation League (CALL) was an animal rights organisation based in central England that was active during the 1980s. Over a hundred animals were taken by this organisation, mainly from centres of animal experimentation. They also took documentation and video footage. The slogan of the CALL was "Through The Door When They Least Expect It".

The Eastern Animal Liberation League (EALL) was based in the East of England.

The main action of the EALL took place in August 1984. Unilever research laboratories in Bedford was stormed by over two hundred animal rights activists and the same time as a legal demonstration was taking place at the front. 25 people were later convicted of conspiracy to burgle and sentenced to a total of 41 years.

One of those convicted was Jill Phipps, who was killed in 1995 during a demonstration, when she was run over by a lorry carrying calves for the live export trade. Jill's mother, Nancy Phipps was also convicted.

These heavy losses to the animal rights movement led to the winding up of the EALL and a change in tactics.

The Northern Animal Liberation League was active in the north of England. Their campaigning slogan was, "Over the wall when they least expect it".[3] It specialised in mass daytime invasion of places such as animal laboratories to obtain photographs and other information, and in some cases animals were also removed. 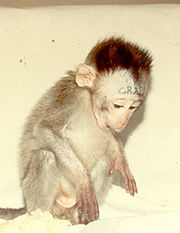 This image of a monkey with the word "crap" tattooed on his head was taken during a daylight raid in 1984 by the South East Animal Liberation League, from a Royal College of Surgeons (RCS) research facility in Kent. The BUAV prosecuted the RCS in connection with material found during the raid, leading to a £250 fine, overturned on appeal.[5]

The South East Animal Liberation League (SEALL) existed in the southeast of England. It specialised in mass daylight raids of places such as animal research laboratories.