Clinton opened in 1897 at 60 West 13th Street at the northern end of Greenwich Village under the name of Boys High School,[1] although this Boys High School was not related to the one in Brooklyn. This school was renamed for New York politician DeWitt Clinton in 1900.[1]

In 1906 it moved to a newly constructed building on Tenth Avenue between 58th Street and 59th Street in the Hell's Kitchen neighborhood—the same year as the opening of the nearby DeWitt Clinton Park where students "farmed" plots in what was the first community garden in New York.

The school's H-shaped building, designed by Charles B. J. Snyder, was said to be the biggest high school building in the United States at the time.[2] After the school moved to the Bronx it became Haaren High School. It is now Haaren Hall on the campus of the John Jay College of Criminal Justice.[3]

Until a high school education became compulsory in the early 1930s, Clinton, like all other public schools in the city, had a Classics Department, where Greek and Latin were taught. Perhaps its most famous teacher was history teacher Dr. Irwin Guernsey, known to generations of students as "Doc" Guernsey. He came to Clinton in Fall, 1914 and retired in Spring, 1959, due to illness. A cripple with two "irish" canes, he taught from the chair and won twice in his lifetime the title of Master Teacher in New York City. He was also head of the Honors Association, Arista. The History wing is named "Guernsey Hall" in his memory, and one can still see the library cart "Doc's Special" that students used to wheel him to class on the last years of his tenure when he was sick.

The school moved to a new building on a 21-acre (85,000 m2) campus at 100 West Mosholu Parkway South and East 205th Street in the Bedford Park section of the Bronx in 1929,[1] where it has remained. Paul Avenue, which runs to the side of the school from Mosholu Parkway to Lehman College, is named after a DeWitt Clinton High School principal, Dr. Paul. It was under this principal that the school moved to its current location in the Bronx.

In the 1930s its enrollment peaked at 12,000 and it was said to be the largest high school in the world. Enrollment by 1999 was about 4,000.[4][5] It remained the last gender-segregated public school in New York City until 1983. The current principal is Geraldine Ambrosio, the first woman to hold the post at the school. In 1996, Clinton was selected by Redbook magazine as one of the five most improved schools in America. In 1999, US News and World Report designated Clinton as one of 96 outstanding schools in America.[4]

The school receives government aid because of the low income status of its students. As of 2006, the school has a large Hispanic population, followed by Blacks and Asians. Caucasians, primarily Albanians,[citation needed] comprise a tiny minority.

The Macy Program, "begun in 1985 with funding from the Macy Foundation,"[4] attracts intelligent, hard-working children and preparing them for exceptionally selective colleges. The Macy program has been expanded to serve 1,200 students. The current Macy coordinator is Ernesta Consolazio.[6] The Macy Honors Gifted Program in the Sciences and Humanities has its own teachers, and a nine-period day compared to the regular New York City eight-period day. The program offers Specialized and Advanced Technology (SMT) courses, Science, Math, English, Law, Government, Philosophy and Great Books. All students in the program are required to have a minimum average of 80 and not to fail any courses. When Macy students are removed from the program, they are placed in Excel, a special Macy-run program just for its kick-outs and drop-outs, before getting fully demoted to the lower programs. From at least 1998 to 2002 some students went directly into the Excel program.

Advanced Macy students are invited to join the even more selective Einstein Program which has about 50 students in each grade. The Einstein Program has even more rigorous academic performance requirements. Einstein students in their junior year are required to take a College Now course for philosophy and government science, in their first and second semester, respectively. These courses are used to earn college credits. Einstein students are automatically assigned to honors and AP classes as early as freshman year, followed by the mandatory AP United States History and AP English Language for Einstein students who make it to their junior year.

Many MACY students are invited to MASTERS, a month-long summer program that offers many hands-on college courses that emphasizes mathematics and science. Some include: Forensic Science, Robotics, Anatomy, Business, Consumer Chemistry and Electricity.

Partly due to the immensity of size, DeWitt Clinton High School has several course offerings, more than most New York City Schools.

The school has over 40 academic and interest clubs. These clubs include[7]:

The Clinton News, the school's newspaper,[8] is written and managed by its students. However, like many other outstanding Clinton possessions, The Clinton News publishes several multi-page full color papers a year by a grant from the Christian A. Johnson Endeavour Foundation. Another Clinton High School publication is The Magpie. Published yearly, the historic color edition of this magazine came out May 2007. This literary collection received the most attention for its association with the Harlem Renaissance.[9]

The Governors are the school mascot at DeWitt Clinton and represent approximately 35 teams. There have been various teams which no longer exist such as fencing and rifle. Teams for the 2007–2008 school year include:[10]

The Cricket Team's formation was encouraged by the large number of South Asians. 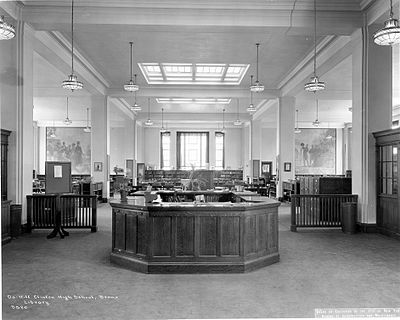 DeWitt Clinton High School is located at 100 West Mosholu Parkway South. It dominates the entire block excluding the ground at the end where the Bronx High School of Science is situated. Facing the main entrance of the building, Paul Avenue runs to the left and Goulden Avenue to the right. The school faces Mosholu Parkway, and has its turf field and track behind it, followed by their softball field, and then the school's baseball and grass football field named Alumni Field. It is after this point that DeWitt Clinton's territory ends, meeting that of Bronx Science.[11]

Clinton has a small branch of Montefiore Medical Clinic in it, capable of supplying essential services to the students of the campus.[12]

The institution was featured in A Walk Through The Bronx with David Hartman and historian Barry Lewis. In it, Hartman and Lewis take a peek at the library.[14]

A book has been written about the school: Pelisson, Gerard J., and James A. Garvey III (2009). The Castle on the Parkway: The Story of New York City's DeWitt Clinton High School and Its Extraordinary Influence on American Life. Hutch Press. ISBN 978-1-883269-30-2. .

Clintonites made headlines and New York City School history in September 2005, when they walked out. The 1,500 strong walk out was a result of the installation of metal detectors.[16]

Although he did not graduate, guitarist Paul "Ace" Frehley of KISS also attended Clinton.[57]

Visitors who have addressed Clinton assemblies include: