Trial by ordeal is a judicial practice by which the guilt or innocence of the accused is determined by subjecting them to an unpleasant, usually dangerous experience. In some cases, the accused were considered innocent only if they survived the test, or if their injuries healed.

In medieval Europe, like trial by combat, trial by ordeal was considered a judicium Dei: a procedure based on the premise that God would help the innocent by performing a miracle on their behalf. The practice has much earlier roots, however, being attested as far back as the Code of Hammurabi and the Code of Ur-Nammu, and also in animist tribal societies, such as the trial by ingestion of "red water" (calabar bean) in Sierra Leone, where the intended effect is magical rather than invocation of a deity's justice. 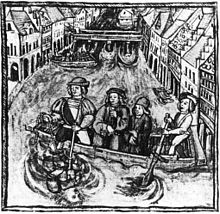 Water-ordeal. Miniature from the chronicle. 1513.

In pre-modern society, the ordeal typically ranked along with the oath and witness accounts as the central means by which to reach a judicial verdict. Indeed, the term ordeal itself, Old English ordǣl, has the meaning of "judgment, verdict" (German Urteil, Dutch oordeel), from Proto-Germanic *uzdailjam "that which is dealt out".

According to one theory, put forward by Peter Leeson, trial by ordeal was surprisingly effective at sorting the guilty from the innocent.[1] Because defendants were believers, only the truly innocent would choose to endure a trial; guilty defendants would confess or settle cases instead. Therefore, the theory goes, church and judicial authorities would routinely rig ordeals so that the participants—presumably innocent—could pass them. If this theory is correct, medieval superstition was actually a useful motivating force for justice.[2]

Priestly cooperation in trials by fire and water was forbidden by Pope Innocent III at the Fourth Lateran Council of 1215, and replaced by compurgation.[3] Trials by ordeal became rarer over the Late Middle Ages, often replaced by confessions extracted under torture, but the practice was discontinued only in the 16th century. Johannes Hartlieb in 1456 reports a popular superstition of how to identify a thief by an ordeal by ingestion practised privately without judicial sanction. 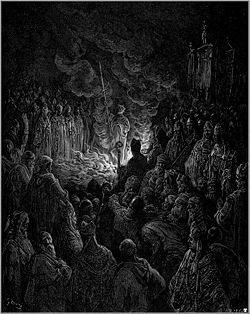 Peter Bartholomew undergoing the ordeal of fire, by Gustave Doré

This test typically required that the accused walk a certain distance, usually nine feet, over red-hot plowshares or holding a red-hot iron. Innocence was sometimes established by a complete lack of injury, but it was more common for the wound to be bandaged and reexamined three days later by a priest, who would pronounce that God had intervened to heal it, or that it was merely festering - in which case the suspect would be exiled or executed. One famous instance of the ordeal of ploughshares concerned Emma of Normandy, accused of adultery with the Bishop of Winchester in the mid-eleventh century. If church chroniclers are to be believed, she was so manifestly innocent that she had already walked over the blades when she asked if her trial would soon begin.

Another form of the ordeal required that an accused remove a stone from a pot of boiling water, oil, or lead. (See "Ordeal of hot water" below.) The assessment of the injury, and the consequences of a miracle or lack of one, followed a similar procedure to that described above. An early (non-judicial) example of the test was described by Gregory of Tours in the 7th century AD. He describes how a Catholic saint, Hyacinth, bested an Arian rival by plucking a stone from a boiling cauldron. Gregory accepted that it took Hyacinth about an hour to complete the task (because the waters were bubbling so ferociously), but he was pleased to record that when the heretic tried, he had the skin boiled off up to his elbow. Peter Bartholomew also went through the ordeal by fire.

In the Assize of Clarendon, enacted in 1166 and the first great legislative act in the reign of the English Angevin King Henry II, the law of the land required that: "anyone, who shall be found, on the oath of the aforesaid [a jury], to be accused or notoriously suspect of having been a robber or murderer or thief, or a receiver of them ... be taken and put to the ordeal of water."[4]

First mentioned in the 6th century Lex Salica, the ordeal of hot water requires the accused to dip his hand in a kettle of boiling water and retrieve a stone.

King Athelstan made a law concerning the ordeal. The water had to be about boiling, and the depth from which the stone had to be retrieved was up to the wrist for one accusation, and up to the elbow for three. The ordeal would take place in the church, with several in attendance, purified and praying God to reveal the truth. Afterwards, the hand was bound and examined after three days to see whether it was healing or festering.[5]

This was still a practice of 12th century Catholic churches: the priest would demand a suspect to place his hand in the boiling water. If, after three days, God had not healed his wounds, the suspect was guilty of the crime.[6] 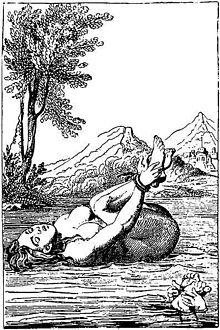 This ordeal has a precedent in the Code of Ur-Nammu and the Code of Hammurabi, under which a man accused of sorcery was to be submerged in a stream and acquitted if he survived. The practice was also set out in Frankish law, but was abolished by Louis the Pious in 829. The practice reappeared in the Late Middle Ages: in the Dreieicher Wildbann of 1338, a man accused of poaching was to be submerged in a barrel three times, and to be considered guilty if he sank to the bottom.

Gregory of Tours (died 594) recorded the common expectation that, with a millstone round the neck, the guilty would sink: "The cruel pagans cast him [Quirinus, bishop of the church of Sissek] into a river with a millstone tied to his neck, and when he had fallen into the waters he was long supported on the surface by a divine miracle, and the waters did not suck him down since the weight of crime did not press upon him."[7]

Ordeal by water was later associated with the witch-hunts of the 16th and 17th centuries, although in this scenario the outcome was reversed from the examples above: an accused who sank was considered innocent, while floating indicated witchcraft. Demonologists developed inventive new theories about how it worked. The ordeal would normally be conducted with a rope holding the subject connected to assistants sitting in a boat or the like, so that the person being tested could be pulled in if he/she did not float; the notion that the ordeal was flatly devised as a situation without any possibility of live acquittal, even if the outcome was 'innocent', is a modern elaboration. Some argued that witches floated because they had renounced baptism when entering the Devil's service. Jacob Rickius claimed that they were supernaturally light, and recommended weighing them as an alternative to dunking them.[8] (A practice that was famously parodied in Monty Python's Quest for the Holy Grail.) King James VI of Scotland (later also James I of England) claimed in his Daemonologie that water was so pure an element that it repelled the guilty. A witch trial including this ordeal took place in Szegedin, Hungary as late as 1728.[9]

The ordeal of water is also contemplated by the Vishnu Smrti,[10] which is one of the texts of the Dharmaśāstra.[11]

Ordeal of the cross

The ordeal of the cross was apparently introduced in the Early Middle Ages by the church in an attempt to discourage judicial duels among the Germanic peoples. As with judicial duels, and unlike most other ordeals, the accuser had to undergo the ordeal together with the accused. They stood on either side of a cross and stretched out their hands horizontally. The one to first lower his arms lost. This ordeal was prescribed by Charlemagne in 779 and again in 806. On the other hand, a decree of Lothar I, recorded in 876, abolished the ordeal so as to avoid the mockery of Christ.

Trial by boiling oil has been practiced in villages in India[14] and in certain parts of West Africa, such as Togo.[15] There are two main alternatives of this trial. In one version, the accused parties are ordered to retrieve an item from a container of boiling oil, with those who refuse the task being found guilty.[14] In the other version of the trial, both the accused and the accuser have to retrieve an item from boiling oil, with the person or persons whose hand remains unscathed being declared innocent.[15]