Route 124 is a state highway in the northern part of New Jersey in the United States that is 14.74 mi (23.72 km) long. It is the eastern section of what used to be Route 24 before that road was realigned to its current freeway alignment. The western end is at an intersection with U.S. Route 202 and County Route 510 in Morristown, Morris County; the eastern end continues as County Route 603 on Springfield Avenue at the border between Maplewood and Irvington in Essex County. The route runs through suburban areas of Morris County, passing through Madison and Chatham. It interchanges with Route 24 on the border of Millburn, Essex County and Summit, Union County and serves as a frontage road for that route. Upon splitting from Route 24, Route 124 continues east through Springfield Township, Union Township, and Maplewood to its eastern terminus.

The alignment of today’s Route 124 was first designated as a part of pre-1927 Route 5 in 1916, a route that was to run from Delaware, Warren County to Newark. In 1927, this portion of the route became a part of Route 24, a route that was to run from Phillipsburg to Newark. A freeway, which is the current alignment of Route 24, was proposed for this portion of the route in the 1950s that was approved in 1960. Route 24 was moved to the new freeway between the John F. Kennedy Parkway on the Millburn/Summit border and Interstate 78 in 1972, with Route 124 being designated along the former alignment of Route 24 east of this point. In 1992, the Route 24 freeway was completed between Interstate 287 in Hanover Township and the John F. Kennedy Parkway. As a result, Route 124 was extended west along the former Route 24 to U.S. Route 202 in Morristown. 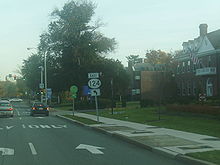 Eastbound Route 124 at turn from South Street to Madison Avenue in Morristown.

Route 124 begins at the intersection of U.S. Route 202 and County Route 510 at the Park Place square in the downtown of Morristown, Morris County. From here, it heads to the southeast as South Street, a two-lane undivided road that passes businesses.[1][2] At the intersection with County Route 663, the road widens to four lanes.[1] A short distance later, County Route 601 continues southeast on South Street and Route 124 bears left to head east on Madison Avenue, coming to an interchange with Interstate 287. Past this interchange, the road passes Morristown Memorial Hospital and continues through mainly commercial areas with some homes. At the intersection with Normandy Parkway, the route turns to the southeast and enters Morris Township, where it narrows to two lanes again, with New Jersey Transit’s Morristown Line running a short distance to the northeast of the route near the Morris County Golf Club. Route 124 continues into more residential areas and crosses into Madison.[1][2]

Route 124 crosses the Passaic River and runs along the border of Millburn, Essex County to the north and Summit, Union County, coming to a large interchange with the Route 24 freeway and County Route 649 (John F. Kennedy Parkway).[1] Here, the route becomes a frontage road for the Route 24 freeway that has two lanes in each direction. The road passes to the south of The Mall at Short Hills before running through the Canoe Brook Country Club. It heads southeast into wooded residential neighborhoods and intersects Union County Route 657, where the Route 124 frontage road has ramps to Route 24.[1][2] A short distance later, the route intersects Essex County Route 608, at which point the route has an eastbound ramp to eastbound Route 24 and a westbound ramp from westbound Route 24.[1] Past this intersection, the Route 124 frontage road along Route 24 ends and the route becomes a two-lane undivided road called South Service Road that closely parallels the north side of Route 24, passing under the Morristown Line. The route heads past businesses and forms the border of Millburn to the north and Springfield Township, Union County to the south, coming to an intersection with County Route 512 near an interchange with Route 24.[1][2] There is a direct ramp from westbound Route 124 to Route 24 a short distance to the northwest of this intersection.[1] 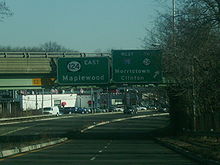 Eastbound Route 124 at exit for westbound Interstate 78 in Springfield Township.

From here, the route passes more commercial establishments as a four-lane road, heading farther from Route 24, before crossing County Route 527. At this intersection, Route 124 entirely enters Springfield Township and becomes Morris Avenue, passing a mix of residences and businesses. The route passes under Interstate 78 without an interchange and becomes a two-lane road that passes through the downtown of Springfield, eventually widening to four lanes again.[1][2] In this area, it intersects County Route 635. Route 124 comes to a circular junction with Route 82, County Route 509 Spur, and County Route 577. Here, Route 82 continues southeast on Morris Avenue, County Route 509 Spur heads south, and County Route 577 heads north.[1] Route 124, meanwhile, briefly splits into a one-way pair here. The eastbound direction heads south on Meisel Avenue before turning north along Maple Avenue while the westbound direction follows Springfield Avenue.[1][2] The two directions of Route 124 rejoin and follow four-lane divided Springfield Avenue northeast to a partial interchange with Interstate 78.[1] Here, there are ramps from the local lanes of eastbound Interstate 78 to both directions of Route 124, to the local lanes of westbound Interstate 78 and Route 24 from both directions of Route 124, and to the express lanes of westbound Interstate 78 from westbound Route 124.[2] Past this interchange, the route enters Union Township and continues east through developed areas, intersecting County Route 638 before narrowing into a two-lane undivided road and intersecting County Route 630. It continues through more urban commercial areas before intersecting County Route 630 again. At this point, Route 124 crosses into Maplewood, Essex County and becomes a three-lane road with a center left-turn lane that is locally maintained. This road heads east through the downtown of Maplewood, coming to an intersection with County Route 601.[1][2] A short distance later, the Route 124 designation ends at the border of Maplewood and Irvington, with Springfield Avenue continuing east into Irvington as County Route 603 toward Newark.[1]

What is modern-day Route 124 was designated as a part of pre-1927 Route 5, a route that was legislated in 1916 to run from Delaware in Warren County east to Newark.[3] In the 1927 New Jersey state highway renumbering, this portion of pre-1927 Route 5 became a part of Route 24, a road that was to run from Phillipsburg to Newark.[4][5] In the 1950s, plans were made to bypass this portion of Route 24 with a freeway running from Interstate 287 in Hanover Township to Interstate 78 in Springfield Township; this was approved of in 1960. This freeway was completed between Interstate 78 and the John F. Kennedy Parkway in 1972. At this time, the Route 24 designation was moved to the new freeway and Route 124 was designated along the former alignment of Route 24 east of this point, which included frontage roads built where the new freeway ran along the old alignment of the road. Following the completion of the Route 24 freeway to Interstate 287 in 1992, Route 124 was extended west along the former alignment of Route 24 between the John F. Kennedy Parkway and U.S. Route 202 in Morristown.[6] In 2002, maintenance of the portion of Route 124 in Maplewood was transferred to the municipality from the New Jersey Department of Transportation.[7]