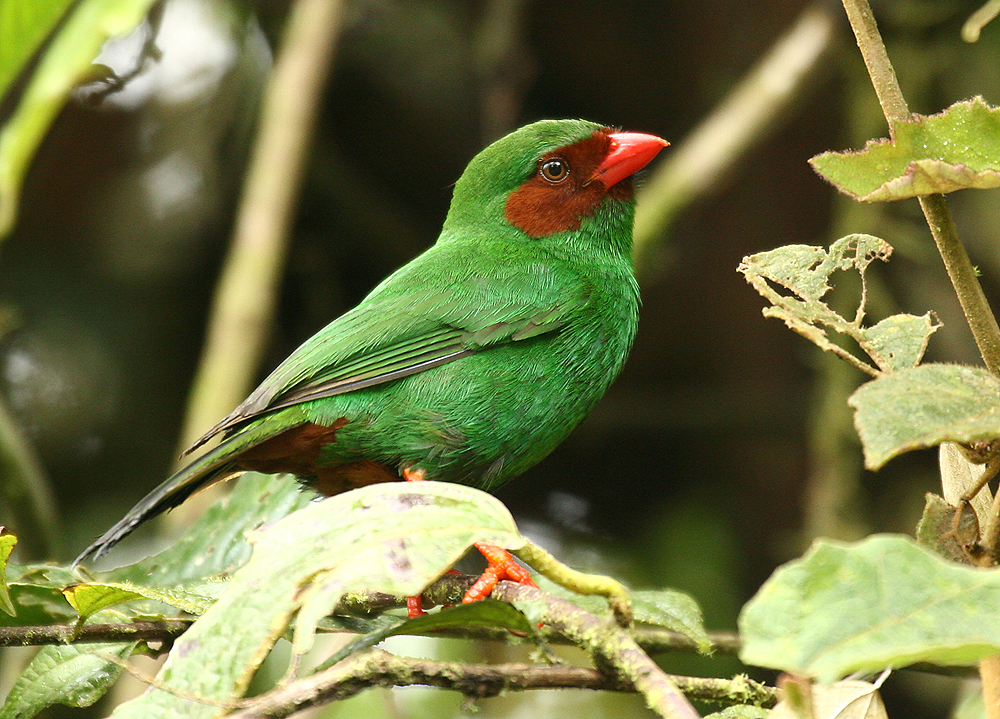 There were traditionally about 240 species of tanagers, but the taxonomic treatment of this family's members is currently in a state of flux. As more of these birds are studied using modern molecular techniques it is expected that some genera may be relocated elsewhere. Already the s and , which were once considered part of the tanager family, are now treated as members of , in their own subfamily (). Likewise the genera "", "", and "" appear to be related to members of the Cardinal family [Yuri & Mindell (2002)] , and may soon be reassigned by the AOU.

Tanagers are small to medium-sized birds. The shortest-bodied species, the , is 9 cm (3.8 in) long and weighs 7 grams, barely smaller than the . The longest, the is 28 cm (11 in) and weighs 76 grams (2.7 oz). The heaviest is the which weighs 114 grams (4 oz) and measures about 23 cm (8.7 in). Both sexes are usually the same size and weight. Tanagers are often brightly colored, but some species are black and white. Birds in their first year are often duller or a different color altogether. Males are typically more brightly coloured than females.

Most tanagers have short, rounded wings. The shape of the bill seems to be linked to the species' foraging habits.

Tanagers are restricted to the and mainly to the . About 60% of tanagers live in South America, and 30% of these species live in the . Most species are endemic to a relatively small area. 18 species live in and year round. 4 species are migratory, breeding in North America. They are the , , and the . Recent molecular evidence indicates these 4 migratory species may be more closely related to the family .

Most tanagers live in pairs or in small groups of 3-5 individuals. These groups may consist simply of parents and their offspring. Birds may also be seen in single species or mixed flocks. Many tanagers are thought to have dull songs, though some are elaborate.

Tanagers are , and their diet varies from genus to genus. They have been seen eating fruits, seeds, nectar, flower parts and insects. Many pick insects off branches. Other species look for insects on the underside of leaves. Yet others wait on branches until they see a flying insect and catch it in the air. Many of these particular species inhabit the same areas, but these specializations alleviate competition.

The breeding season begin in March through until June in temperate areas and in September through October in . Some species are territorial while others build their nests closer together. There is little information on tanager breeding behavior or whether they are or . Males show off their brightest feathers to potential mates and rival males. Some species' courtship rituals involve bowing and tail lifting.

Most tanagers build cup nests on branches in trees. Some nests are almost globular. Entrances are usually built on the side of the nest. The nests can be shallow or deep. The species of the tree they choose to build their nest in and the nest's position varies among genera. Most species nest in an area hidden by very dense vegetation. There is still no information on the nests of some species.

The clutch size is 3–5 eggs. The female incubates the eggs and builds the nest, but the male may feed the female while she incubates. Both sexes feed the young. Five species have helpers assist in feeding the young. These helpers are thought to be the previous year's nestlings.

Phylogenetic studies suggest the true tanagers form three main groups two of which consist of several smaller, well-supported . [Fjeldså & Rahbek (2006) & Klicka et al (2007)] The list below is an attempt using information gleaned from the latest studies to organise them into coherent related groups, and as such may contain groupings not yet accepted by or are under review by the various ornithological taxonomy authorities. [See http://www.museum.lsu.edu/~Remsen/SACCBaseline.html ]

e) "Blue Finch" clade. Relationships within Thraupidae uncertain but may be related to "Poospiza" clade [(See below: Group 1f)] :
* Genus "" - Blue Finch [Klicka et al (2007). This species formerly placed near "" in the is related to "" a tanager-finch]
* Genus? "" [http://www.zoonomen.net/cit/RI/Genera/RIGenAZ.html] - Band-tailed Sierra-finch

* Genus "" (16 species; traditionally placed in , but biochemical evidence suggests they may be tanagers or a sister group