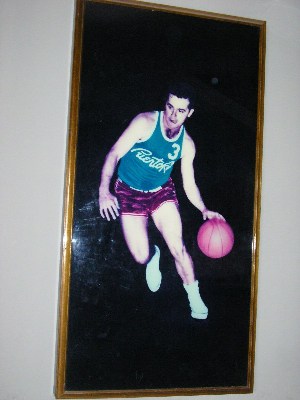 Juan "Pachín" Vicéns Sastre (, - , ) was a renowned Puerto Rican player. Vicéns was famous for his performance with the Ponce Lions and with the Puerto Rican National Basketball Team.

During the in , Juan "Pachín" Vicens was declared to be the "Best Player of the World"

Juan Vicéns Sastre was born in . He was the sixth child of José 'Pepito' Vicéns Batalla and Antonia 'doña Lila' Sastre. In 1949, he moved to Ponce to study in the "Colegio Ponceño" encouraged by his brother Enrique "Coco" Vicéns, who was already playing with the Lions.

After moving, he started visiting the practices and filling in for the team when a player was needed. In 1950, he finally debuted in the (BSN) league with the Ponce Lions. In 1952, he led the Lions to their first championship, and was declared the of the series. In 1954, he repeated the feat with another championship and his second award.

During his sixteen years with the Ponce Lions, he led them to ten finals, and seven championship titles. In 1958, he was the scoring leader of the league, and was selected the league's two more times (1958 and 1960). He was also the first player to score 5,000 points in the league, retiring with a total of 5,102. At the end of the 1950s, he received an invitation to play for the , but he declined, so he could continue playing with Ponce and with the Puerto Rican team.

Vicéns was a member of the Puerto Rican National Basketball Team and represented the island in four Central American and Caribbean Games, two World Championships and two . It was at the , held in , that Vicéns was elected as the World's Best Basketball Player. He was also named among the five best players of the tournament, together with 's and , 's , and Puerto Rican .

In 1966, Vicéns - along with and Teo Cruz - led the National team to a at the Caribbean and Central American Games held in San Juan.

After retiring as an active basketball player in 1966, attempted to recruit Vicéns as a candidate for the seat of of , with the newly-founded . However, Vicéns declined and dedicated himself to businesses. He had a successful career as branch manager for several banks in Ponce, and continued being involved in sports as a commentator.

In 1972, the gave their new venue the name of Juan Pachín Vicéns Coliseum. The venue is still decorated with Vicéns like pictures, shirts, and a sculpture.

During the second half of 2006, Vicéns' health started to deteriorate to the point that he had to have his legs amputated. Due to his illness he had to be hospitalized several times, and finally died on , at his home in Ponce at the age of 72.