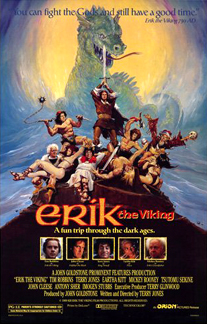 "Erik the Viking" is a 1989 written and directed by , who also makes an appearance in it. The film was inspired by Jones's children's book "The Saga of Erik the Viking" (1983), but the plot is completely different.

The original US cut of the film runs to 100 minutes. Unhappy with the film's slow pacing, Jones prepared a 90-minute cut for the British market, but was frustrated that he had not been given enough time to edit the film to his satisfaction. In 2006 Jones was given the opportunity of re-editing the film for DVD. Jones delegated the actual editing work to his son Bill, who produced a 75-minute "Director's Son's Cut" with re-ordered scenes and much tighter pacing as well as a completely remixed and re-dubbed soundtrack. Jones considered this highly appropriate because the original book was written for Bill.

Principal photography took place at . Some footage of Erik's village and environments was shot in , while the Hy-Brasil sequence was filmed in . Artwork was made by artist, .

The film is based largely upon . In the film's opening scene Erik (), a young , discovers that he has no taste for and pillage, and suffers guilt over an innocent woman ()'s death.

Erik learns from the wise woman Freya () that Fenrir the has swallowed the , plunging the world into the grip of the age of . Appalled by this revelation, Erik resolves to travel to to petition the gods to end Ragnarök. Freya informs him that to do so he must seek the Horn Resounding in the land of Hy-Brasil. The first note blown upon the Horn will take Erik and his crew to Asgard, the second will awaken the gods, and the third will bring the crew home.

Keitel () and his underling Loki (), are opposed to Erik's plan, because peace would mean no more demand for Keitel's swords. Keitel joins Erik's crew, hoping to sabotage Erik's plans, while Halfdan's warship sails in pursuit with Loki aboard.

Arriving at Hy-Brasil, they are astonished to find it a sunlit land whose people are friendly (if ally untalented). Erik promptly falls in love with Princess Aud (), daughter of King Arnulf (Terry Jones). During one of their romantic encounters Erik hides from Arnulf using Aud's magic cloak of .

Aud has warned the Vikings that should blood ever be shed upon Hy-Brasil the entire island would sink beneath the waves. Erik and his crew defend Hy-Brasil against Halfdan's ship.

In gratitude for Erik's having saved Hy-Brasil, King Arnulf presents him with the Horn Resounding, which is much larger than Erik had imagined. Loki steals the Horn's mouthpiece, without which it cannot be sounded, and persuades Keitel to throw it in the sea. Snorri, one of Erik's men, catches them in the act and Loki kills him. A single drop of the man's blood falls from Loki's dagger, triggering an that causes the island to begin sinking.

Erik's crew, joined by Aud, prepare to escape in their ship with the Horn safely aboard, but Arnulf refuses to join them, denying that the island is sinking until the very moment he and the other islanders are swallowed by the waves.

Aud sounds the first note on the Horn. The ship is propelled over the edge of the and into space, coming to rest upon the plain of Asgard. Erik sounds the second note to awaken the gods, and he and his crew approach the great Hall of .

Erik and the crew encounter old friends and enemies slain in battle. The gods turn out to be petulant ren who have no interest in answering mortal prayers. persuades Fenrir to spit out the sun, but tells Erik that the end of Ragnarök will not bring peace to the world.

Odin then informs Erik that he and his crew cannot return home. Nor may they remain in Valhalla, since they were not slain in battle; instead they are to be cast into the fiery Pit of Hel. Some of the vikings killed in the sea-battle with Halfdan attempt to save them, but even as they are drawn into the Pit they hear the Horn Resounding's third note, which flings them clear.

Erik's crew, including the formerly dead men, immediately find themselves back in their home village, but are dismayed to find that Halfdan and his soldiers have got there first and are holding the villagers captive. Halfdan and his men are crushed to death by Erik's ship as it falls out of the sky with Harald aboard. As the villagers celebrate Erik's return and Halfdan's defeat the sun rises, bringing the age of Ragnarök to an end.

*The names of numerous figures from Norse history and lore are used for characters in the movie, including , , , Thorfinn Skullsplitter, Leif the Lucky, and . These names are often used in an ironic way, thus Ivar the Boneless (in reality a great warlord and a leader of the ) is presented as a coward. The names of genuine vikings such as are also used in conversation.