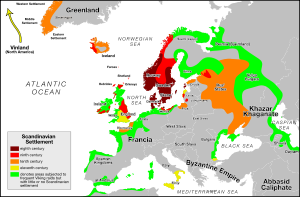 Map showing area of Norse settlements during the 8th to 11th centuries. Also the trade and raid routes, often inseparable, are marked. 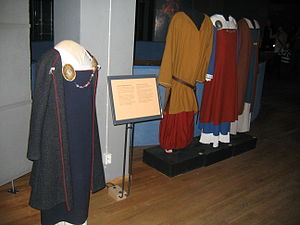 Norse clothes in the Swedish Museum of National Antiquities in Stockholm.

Norsemen is used to refer to the group of people as a whole who spoke what is now called the Old Norse language belonging to the North Germanic branch of Indo-European languages, especially Norwegian, Icelandic, Faroese, Swedish and Danish in their earlier forms.

The meaning of Norseman was "people from the North" and was applied primarily to Nordic people originating from southern and central[citation needed] Scandinavia. They established states and settlements in areas which today are part of the Faroe Islands, England, Scotland, Wales, Iceland, Finland, Ireland, Russia, Italy, Canada, Greenland, France, Ukraine, Estonia, Latvia, Lithuania, Poland, and Germany.

Norse and Norsemen are applied to the Scandinavian population of the period from the late 8th century to the 11th century. The term "Normans" was later primarily associated with the people of Norse origin in Normandy, France, assimilated into French culture and language. The term "Finn-Galls" (i.e. Norse Vikings or Norwegians) [1] (Gall Goidel, lit.: foreign Gaelic) was used concerning the people of Norse descent in Ireland and Scotland, who assimilated into the Gaelic culture.

"In the eighth century the inrush of the Vikings in force began to be felt all over Pictland. These Vikings were pagans and savages of the most unrestrained and pitiless type. They were composed of Finn-Gall or Norwegians, and of Dubh-Gall or Danes. The latter were a mixed breed, with a Hunnish strain in them".[2]

Vikings has been a common term for Norsemen in the early medieval period, especially in connection with raids and monastic plundering by Norsemen in Great Britain and Ireland. Northmen was famously used in the prayer A furore normannorum libera nos domine ("From the fury of the Northmen deliver us, O Lord!"), attributed to monks of the English monasteries plundered by Viking raids in the 8th and 9th centuries.

The Northmen were also known as Ascomanni, ashmen, by the Germans,[3] Lochlanach (Norse) by the Irish and Dene (Danes) by the Anglo-Saxons.

The Slavs, the Arabs and the Byzantins knew them as the Rus' or Rhōs, probably derived from various uses of rōþs-, i.e. "related to rowing", or derived from the area of Roslagen in east-central Sweden, where most of the Norsemen who visited the Slavic lands came from. Archaeologists and historians of today believe that these Scandinavian settlements in the Slavic lands formed the names of the countries Russia and Belarus.

The Slavs and the Byzantines also called them Varangians (ON: Væringjar, meaning sworn men or from Slavic варяги supposedly deriving from the root "вар"—"profit" as coming from North they would profit by trading goods and not producing them, which had a negative connotation in Slavic culture of that time), and the Scandinavian bodyguards of the Byzantine emperors were known as the Varangian Guard.

In the modern Scandinavian languages, no common word for Norsemen exists. In Swedish, the term nordmän is used, which corresponds to "Northmen". The Norwegians and Danish lack a word for the ancient North Germanic peoples. Usually they are simply (but incorrectly) called Vikings in both Denmark, Norway, as well as Sweden. In Norway, nordmann, and Denmark, nordmand, is the common demonym for a Norwegian. In Icelandic, Norðmaður means a man from Norway, but Norrænn maður is the term for a "North Germanic man" (or "woman"/"people"). In Faroese, Norðmaður means a man from Norway, just like in Icelandic, but the term Norrønur maður or Norrøn kvinna/fólk are the terms for the "North Germanic man" or "North Germanic woman/people" respectively.

The word nordbo however, (Sw.: nordborna, Da.: nordboerne, No.: nordboerne or nordbuane in the definite plural) is used for both ancient and modern people living in the Nordic countries and speaking one of the North Germanic languages.