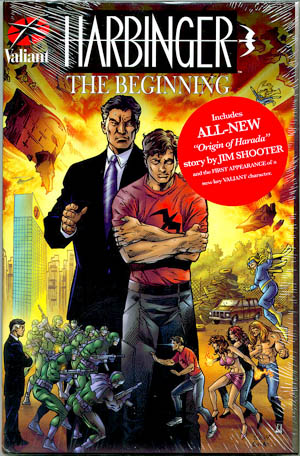 "Harbinger" is a series about a group of teenage super-powered outcasts known as Harbingers, published by . Created by , it debuted with "Harbinger" #1 in January 1992.

* - The most powerful on Earth, Harada commands the full spectrum of psionic abilities, including , , , and many other deadly talents. Fearing that humanity may eventually destroy itself, Harada decided early in his life to preserve the planet by clandestinely conquering it. To this end, he established the Harbinger Foundation to recruit others with paranormal abilities, whom Harada refers to as "Harbingers of the next step in human evolution". He seldom confronts his enemies directly, preferring to leave such dirty-work to his elite Harbinger warriors, the "Eggbreakers". With tremendous economic and political clout, Harada seems close to achieving his goals, and is ready to destroy anyone who stands in his way.
* Peter Stanchek ("Sting") Sting is a psionic of extraordinary power and potential. Once a student of Toyo Harada, he decided to break away when Harada arranged the murder of Pete's best friend. Together with Kris, Zephyr, Flamingo and Torque, Sting tries to thwart the plans of Harada and his Harbinger Foundation.
* Kris Hathaway - Although not possessing super powers of her own, Kris is still an important member of Sting's renegades. Her level head and intelligence keeps the team together and in focus of their goal.
* Faith Herbert ("Zephyr") Zephyr, known as Zeppelin to her friends, has the ability to fly. Founder of the .
* Charlene Dupre ("Flamingo") Flamingo has the power to generate and control flames.
* John Torkelson ("Torque") Torque was a mechanic in Georgia before Sting released his powers of enormous strength and durability. In the beginning, Torque seemed very hostile and distant, but he has proven himself a loyal and valuable member of the group.
* Amanda McKee ("Livewire") Harada recruited Amanda and other like-minded (i.e., violent) individuals into his "Eggbreakers", the squad of enforcers who did Harada's dirty work. She was given the codename Livewire, due to her power to manipulate electromagnetic forces; she especially enjoyed using a length of magnetically animated cable as a weapon.
* Edward Sedgewick ("Stronghold") was a member of the Harbinger Foundation of would-be Harbinger messiah . Edward was given the nickname Stronghold and recruited into the "Eggbreakers" enforcer squad. He had the power to psionically absorb mass from objects around him and use it to increase his own size and strength to gigantic proportions. When he killed a fellow Harbinger, he realized that the Foundation was not right for him and fled with his partner Livewire. Stronghold and Livewire were later recruited by the Geoff McHenry to battle villain , a servant of .

Toyo Harada is the first Harbinger, and unlike subsequent Harbingers he was able to make his powers manifest at will, or activate the powers of others. Other Harbingers exhibit powers only rarely and this activation is always brought on by severe stress.

Harada is an Omega Harbinger: he commands the full spectrum of psionic abilities, including telepathy, telekinesis, mind-control, and many other talents. He uses these powers to create a multinational corporation and amass a large fortune. Fearing the world is on a course to destroy itself, he plans to take it over and mold it to his specifications. To this end he creates the Harbinger Foundation, which actively searches for potential Harbingers (whose powers Harada triggers with his psionic abilities).

Pete Stanchek is a normal teenager until he develops Harbinger abilities. After seeing an advertisement he contacts the Harbinger Foundation. Harada is intrigued by Pete, who is the only other Harbinger to have triggered his own powers and who exhibits multiple abilities. Harada is no longer the only Omega Harbinger.

Harada tries to persuade Pete to join the Harbinger Foundation and become Harada's right hand man, but when Pete's best friend, who had been vocal about his distrust for Harada, is murdered by the Foundation Pete realizes the truth.

Pete, along with Kris (a high school cheerleader who, he later realizes, he had been unconsciously mentally controlling so that she would go out with him) become renegades. They decide to recruit Harbinger's themselves, activate their abilities and form an army capable of challenging Harada.

Harbinger #0 is the prequel to the Harbinger series and details how Peter Stanchek became involved with the Harbinger Foundation and came to oppose Harada. Each issue of Harbinger from #1 through #6 contained a numbered coupon. When a set of coupons was collected and sent to Valiant a copy of Harbinger #0 Pink Mail Away Variant could be redeemed. The book became highly sought after reaching prices as high as $300 dollars in back issue trading. A blue cover version was eventually released to meet demand. Today, the Pink Mail Away Version of Harbinger #0 is still one of the most sought after Valiant books.

Each issue of Harbinger from #1 through #6 contained a numbered coupon that could be collected and redeemed for a copy of Harbinger #0 Pink Mail Away Variant, the prequel to the Harbinger series. Each coupon also featured one panel of a six panel story by that told the origin of . A new hardcover collection () due in August features a new story by entitled The "Origin of Harada" which presumably fleshes out the story that appeared on the coupons.

The following is a list of those who contributed to the creation of the series. When repeated, only last names will be used.

Part of the series has been collected into volumes:

Harbinger #1 was in Wizard Magazine's "Top Ten Comics of the Month" list for eight consecutive months. It was eventually dethroned by another VALIANT book (Rai #0).

Harbinger #1 was named "hottest book of the year” by Wizard Magazine in 1993.

Harbinger #1 was named "the collectible of the decade” by Wizard Magazine.

Harbinger #1 was named "most important comic book of the decade" by Your Comics Online.

Harbinger #0-25 was named one of the best runs in comics over the last 15 years by Eventually Clever. ""Harbinger #0-25--Peter Stanchek leads a team of misfit mutants are on the run from Harbinger, a corporation headed by the most powerful mutant on Earth. Peter is the second most powerful, and the whole tone of the series changes once you read issue #0"."

The Harbinger trade was rumoured to have been ranked #7 in Wizards list of the top 100 greatest trades but was taken off the list completely at the last minute for unknown reasons.Fact|date=November 2007

An alternative cover to Harbinger #1 exists. It was used as an 'unseen art' chase card for the VALIANT ERA One card set.

Marv from Frank Miller's appears on the cover of Harbinger #8 (part of the Unity crossover). Miller drew the cover to this issue.

The cover for Harbinger #13 by David Lapham is a homage to .

In March 2008, it was announced that acquired the rights of "Harbinger", enlisting as director. , Dinesh Shamdasani, Jason Kothari and Ratner will all produce. The film might be branded under Paramount's banner. Ratner was looking for an opportunity to start a superhero franchise from scratch. The filmmakers are searching for a screenwriter, while Ratner works on a number of projects. [cite news | author=Michael Fleming | url=http://www.variety.com/article/VR1117982173.html?categoryid=13&cs=1 | title=Ratner eyes Valiant's "Harbinger"| publisher=Variety | date= | accessdate=2008-03-10]

* [http://www.valiantentertainment.com/wiki/index.php/Harbinger/ Harbinger] at the Valiant Entertainment wiki
* [http://www.valiantcomics.com/valiant/title.asp?tc=h&u=1 Harbinger] at the Valiant Comics fan site
* [http://weblogs.variety.com/bags_and_boards/2007/06/valiants_harbin.html Harbinger: The Beginning article at Variety Online]
* [http://forum.newsarama.com/showthread.php?t=115538 Harbinger: The Beginning Press Release] at
* [http://www.sequart.com/articles/?article=1002 The Ten Most Important Comic Books of the 1990s (Harbinger is ranked #1)]
* [http://www.newsarama.com/forums/showthread.php?s=&threadid=5852 "Valiant Days, Valiant Nights - A Look Back at the Rise and Fall of Valiant by Ryan McLelland] ,