Ocean Drive is a series of local roads in southern New Jersey, connecting Atlantic City to Cape May along barrier islands on the Atlantic Ocean. It consists of several roads and includes five of the six toll bridges owned by the Cape May County Bridge Commission.

Cape May Point to Strathmere 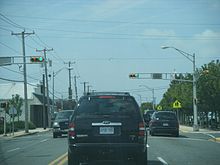 Southbound on Ocean Drive (Cape May CR 621) in Wildwood at Baker Avenue.

It crosses the Cape May Canal into Lower Township and makes a right turn onto County Route 621. It then crosses over the Middle Thorofare Bridge (toll) and continues north into Wildwood Crest. Ocean Drive follows CR 621 through the length of The Wildwoods, passing through Wildwood Crest, Wildwood (where it intersects New Jersey Route 47), and finally continuing into North Wildwood. In North Wildwood, CR 621 ends and Ocean Drive follows New Jersey Route 147 into Middle Township.[3][4] 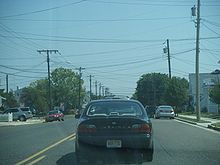 Northbound on Ocean Drive (Cape May CR 656) in Ocean City at 16th Street.

The Cape May County Bridge Commission was created by the county in 1934 in order to build a series of toll bridges linking the coastal communities of Cape May County. With the creation of this agency, the bridges were to receive federal funding through the New Deal. In 1940, several of the bridges comprising Ocean Drive were built, including the Middle Thorofare Bridge, Grassy Sound Bridge, and Townsends Inlet Bridge. In 1946, the Corsons Inlet Bridge was built and the Ocean City-Longport Bridge, built in 1927, was purchased by the commission, completing the link for the barrier islands between Cape May and Atlantic City.[5]

Along its route, the Ocean Drive followed mostly local roads.[3] The exception was the portion across the Cape May Canal between Cape May Canal and Lower Township, which was initially part of US 9 and Route 4 before becoming US 9 only in 1953 and then Route 109 in the 1970s.[6][7][8][9] By the 1950s and 1960s, most of the remainder of Ocean Drive became part of several county routes. The route between Sunset Beach and Cape May became CR 6 while the spur into Cape May Point became CR 51. Within Cape May, Ocean Drive became CR 26, CR 4, and CR 22 before it joined US 9. Past US 9, it became CR 21 and part of CR 585 before heading through Wildwood Crest and Wildwood along Atlantic Avenue. In North Wildwood, the route became CR 7/CR 585 before turning north into Middle Township and following CR 18/CR 585. Ocean Drive turned north and followed CR 30 through Stone Harbor and Avalon and CR 19 through Sea Isle City and into Ocean City. In Ocean City, Ocean Drive continued north from CR 19 onto Wesley Avenue and Gardens Parkway.[3][10] Continuing into Atlantic County, the route headed east on CR 20 and entered Longport, where it became CR 29 through Longport, Margate City, and into Ventnor City. North of the Dorset Avenue intersection, Ocean Drive was locally maintained.[3][11] In 1969, the CR 20 portion of Ocean Drive in Atlantic County became Route 152 and in 1971, the portion of Ocean Drive leading into North Wildwood became a part of Route 147.[12][13] CR 585 was later removed from Ocean Drive and the remaining county routes in Cape May and Atlantic County were given numbers in the 600-series. As a result, CR 6 became CR 606, CR 51 became CR 651, CR 26 became CR 626, CR 4 became CR 604, CR 22 became CR 622, CR 21 and CR 7 became CR 621, CR 30 and CR 19 became CR 619 in Cape May County.[10][14] In Atlantic County, CR 29 became CR 629.[11][15] In addition, Ocean Drive was modified to use CR 621 through the entirety of The Wildwoods and CR 656 (former CR 56) through the northern part of Ocean City.[4][14]

Over the years, several of the bridges along Ocean Drive have been reconstructed. In the late 1940s, the Ocean City-Longport Bridge was reconstructed due to poor maintenance from the earlier owner. In 1993, it was determined this bridge needed to be replaced, with the new bridge opened in 2002. A portion of the old bridge became a fishing pier. In 1998, bonds were issued for improvements to all of the bridges owned by the commission. Bonds were issued in 2005 for construction projects on the Townsends Inlet Bridge and Corsons Inlet Bridge.[5]

When the Ocean Drive bridges were first built, the toll for cars was 25 cents, charged in both directions at the Middle Thorofare, Grassy Sound, Townsends Inlet, Corsons Inlet, and Ocean City-Longport bridges. Toll hikes occurred in 1978, 1984, and 1988 in order to fund construction projects to the bridges. Following the rebuilding of the Ocean City-Longport Bridge in 2002, that bridge was converted to one way tolling, with a $1 toll charged to cars in the southbound direction. The other bridges would be converted to one way tolling by 2005.[5]

The five toll bridges currently charge $1.50 for cars. In addition, a pack of 50 tickets may be purchased for $60, with one ticket charged at each toll plaza. The Middle Thorofare, Townsends Inlet, and Ocean City-Longport bridges have tolls in the southbound direction while the Grassy Sound and Corsons Inlet bridges have northbound tolls.[16]

The mileposts correspond to the routes that Ocean Drive follows.