The term clearway is used in several commonwealth countries to refer to stretches of road or street where parking is limited or prohibited. 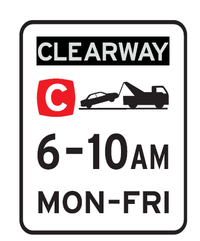 Example of a Clearway sign in New South Wales

In Australia, a clearway is a special road upon which only taxis and buses may stop at the curb on certain times of the day. Any other vehicle which stands at the curb may be towed away (unless there is some form of emergency).

Clearways are used on congested roads where there is no room for additional traffic lanes. Clearways improve traffic flow[citation needed] at certain times of the day by prohibiting stopping in the lane next to the curb, adding an additional lane to the roadway (when used on both sides of the road, two are added).

In New South Wales clearways are indicated by a yellow broken line at the curb and "clearway" signage (which indicates the times of the day upon which the clearway operates).

Sign for a clearway in the UK. The plate under the sign indicates that the clearway restrictions do not apply beyond this point.
See also: Red route

In the United Kingdom, a clearway is a road or section of road on which it is illegal to stop for any reason other than a breakdown or an obstruction to the road such as stationary traffic.[1] Certain sections of urban road may be designated Urban Clearway, which is a little-used designation, but one which prevents vehicles being stopped during the peak hours, typically 0700-0930 and 1500-1800. This allows the commuter traffic to flow more freely, but still allows for overnight and daytime parking when the road is not so busy.

In New Zealand, a clearway is section of road on which it is illegal to stop for any reason other than a breakdown or an obstruction to the road such as stationary traffic. Clearways may operate at all times or for limited times such as peak traffic flow times. As such, they operate in a similar way to those in the United Kingdom.

Similar signs are deployed on New Zealand clearways to British clearways, with a standard blue circle edged in red and featuring a red diagonal cross. If the clearway is for limited periods only, this will be indicated by a small sign below the clearway sign. Whereas in the United Kingdom a further notice with the word "Begins" or "End" will indicate the extent of a clearway, in New Zealand this is indicated by small signs featuring red arrows, indicating the direction from the sign in which the clearway is in operation.

In aviation, clearway is a term related to the dimension of some runways. Clearway is an area beyond the paved runway, free of obstructions and under the control of the airport authorities. The length of the clearway may be included in the length of the takeoff distance available.[2] For example, if a paved runway is 2000 m long and there are 400 m of clearway beyond the end of the runway, the takeoff distance available is 2400 m long. When the runway is to be used for takeoff of a large airplane, the maximum permissible takeoff weight of the airplane can be based on the takeoff distance available, including clearway. Clearway allows large airplanes to take off at a heavier weight than would be allowed if only the length of the paved runway is taken into account.