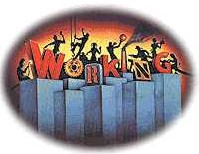 "Working" is a musical with a book by Stephen Schwartz and Nina Faso, music by Schwartz, , , , and , and lyrics by Schwartz, Carnelia, Grant, Taylor, and .

Based on the book of the same name by , it chronicles a day in the life of twenty-six average American s. Characters include an ironworker, a , a , a , a , a UPS delivery man, a , and a retiree. All of their s, in which they describe their daily routines and discuss their hopes and aspirations, are true stories derived from interviews with actual workers. While there is neither a unified plot nor a narrative thread carrying the action forward, each scene makes a smooth transition into the next, with each character's speech related in content to what precedes and follows it.

The show was originally staged at the in . After twelve previews the Broadway production, directed by Schwartz and by , opened on , at the , where it ran for 24 performances. The cast, most of whom played multiple roles, included , , , , , , , , , and Matt Landers.

In 1982, Schwartz and adapted the show for a ninety-minute telecast on the series "", directed by himself and and introduced by Terkel. The cast included , , , , , , , , , , , , , James Taylor, and Lynne Thigpen. The program was nominated for three technical and won for Outstanding Lighting Direction.

A revised and updated version was staged by the in and in 1999. It is a popular choice with s and companies.

In 2008, was invited by Schwartz to contribute two new songs to a revised version that opened in May at the Asolo Repertory Theater in Sarasota, Florida. Another production of the revised version is scheduled for March 2009 at The Old Globe in San Diego.