A common motif in the of s, the alpha helix (α-helix) is a right-handed coiled conformation, resembling a spring, in which every backbone N-H group donates a to the backbone C=O group of the four residues earlier ( hydrogen bonding). This secondary structure is also sometimes called a classic Pauling-Corey-Branson alpha helix (see below). (See also .)

In the early 1930s, showed that there were drastic changes in the of moist wool or hair fibers upon significant stretching. The data suggested that the unstretched fibers had a coiled molecular structure with a characteristic repeat of ~5.1 Å (= 0.51 nm).

*the unstretched protein molecules formed a helix (which he called the α-form); and

*the stretching caused the helix to uncoil, forming an extended state (which he called the β-form).

Two key developments in the modeling of the modern α-helix were (1) the correct bond geometry, thanks to the crystal structure determinations of s and s and Pauling's prediction of "planar" s; and (2) the relinquishing of the assumption of an integral number of residues per turn of the helix. The pivotal moment came in January 1948, when Pauling caught a cold and went to bed. Being bored, he drew a polypeptide chain of roughly correct dimensions on a strip of paper and folded it into a helix, being careful to maintain the planar peptide bonds. After a few attempts, he produced a model with physically plausible hydrogen bonds. Pauling then worked with Corey and Branson to confirm his model before publication. [cite journal | last = Pauling | first = L | authorlink = Linus Pauling | coauthors = Corey RB, Branson HR | year = 1951 | title = The Structure of Proteins: Two Hydrogen-Bonded Helical Configurations of the Polypeptide Chain | journal = Proceedings of the National Academy of Science in Washington | volume = 37 | pages = 205&ndash;? | doi = 10.1073/pnas.37.4.205]

The amino acids in an α helix are arranged in a right-handed helical structure, 5.4 Å (= 0.54 nm) wide. Each amino acid corresponds to a 100° turn in the helix (i.e., the helix has 3.6 residues per turn), and a translation of 1.5 Å (= 0.15 nm) along the helical axis. Most importantly, the N-H group of an amino acid forms a with the C=O group of the amino acid "four" residues earlier; this repeated hydrogen bonding defines an α-helix. Similar structures include the 310 helix ( hydrogen bonding) and the π-helix ( hydrogen bonding). These alternative helices are relatively rare, although the 310 helix is often found at the ends of α-helices, "closing" them off. Transient helices (sometimes called δ-helices) have also been reported as intermediates in simulations of α-helical folding.

Residues in α-helices typically adopt backbone (φ, ψ) s around (-60°, -45°). More generally, they adopt dihedral angles such that the ψ of one residue and the φ of the "next" residue sum to roughly -105°. Consequently, α-helical dihedral angles generally fall on a diagonal stripe on the (of slope -1), ranging from (-90°, -15°) to (-35°, -70°). For comparison, the sum of the dihedral angles for a 310 helix is roughly -75°, whereas that for the π-helix is roughly -130°. The general formula for the rotation angle Ω per residue of any polypeptide helix with "trans" isomers is given by the equationFact|date=May 2007

The α-helix is tightly packed; there is almost no free space within the helix. The amino-acid side chains are on the outside of the helix, and point roughly "downwards" (i.e., towards the N-terminus), like the branches of an evergreen tree ( effect). This directionality is sometimes used in preliminary, low-resolution electron-density maps to determine the direction of the protein backbone.

Helices observed in proteins can range from four to over forty residues long, but a typical helix contains about ten amino acids (about three turns). Short s generally do not exhibit much alpha helical structure in solution, since the entropic cost associated with the folding of the polypeptide chain is not compensated by sufficiently many stabilizing interactions. The backbone s of α-helices are generally considered slightly weaker than those found in β-sheets, and are readily attacked by the ambient water molecules. However, in more hydrophobic environments such as the plasma membrane, or in the presence of co-solvents such as (TFE), or isolated from solvent in the gas phase, [cite journal | last = Hudgins | first = RR | coauthors = Jarrold MF | year = 1999 | title = Helix Formation in Unsolvated Alanine-Based Peptides: Helical Monomers and Helical Dimers | journal = Journal of the American Chemical Society | volume = 121 | pages = 3494&ndash;3501 | doi = 10.1021/ja983996a] oligopeptides readily adopt stable α-helical structure.

Since the α-helix is defined by its hydrogen bonds, the most reliable experimental methods for determining an α-helix involve an atomic-resolution structure provided by or NMR spectroscopy. In some cases, the individual hydrogen bonds can be observed directly as a small scalar coupling in NMR.

There are several lower-resolution methods for assigning general helical structure. The NMR s (particularly of the , and atoms) and s are often characteristic of helices. The far-UV (170-250 nm) spectrum of helices is also idiosyncratic, exhibiting a pronounced double minimum at ~208 nm and ~222 nm. spectroscopy is rarely used, since the α-helical spectrum resembles that for (although these might be discerned by, e.g., ). Finally, cryo is now capable of discerning individual α-helices within a protein, although their assignment to residues is still an active area of research.

Long homopolymers of amino acids often form helices (if soluble). Such long, isolated helices can also be detected by other methods, such as , and measurements of its . Strictly speaking, these methods only detect the characteristic (long cigar-like) hydrodynamic shape of a helix, or its large .

Different amino-acid sequences have different propensities for forming α-helical structure. , , , , and ("MALEK" in the 1-letter codes) all have especially high helix-forming propensities, whereas , , and have poor helix-forming propensities. tends to break or kink helices because it cannot donate an amide (having no amide hydrogen), and because its sidechain interferes sterically; its ring structure also restricts its backbone φ to the vicinity of -70°, which is less common in α-helices. However, proline is often seen as the "first" residue of a helix, presumably due to its structural rigidity. At the other extreme, also tends to disrupt helices because its high conformational flexibility makes it entropically expensive to adopt the relatively constrained α-helical structure.

A helix has an overall caused by the aggregate effect of all the individual dipoles from the groups of the peptide bond pointing along the helix axis. This can lead to destabilization of the helix through entropic effects. As a result, α helices are often capped at the N-terminal end by a negatively charged , such as , in order to neutralize this helix dipole. Less common (and less effective) is C-terminal capping with a positively charged amino acid, such as . The N-terminal positive charge is commonly used to bind negatively charged ligands such as phosphate groups, which is especially effective because the backbone amides can serve as hydrogen bond donors.

, the first protein whose structure was solved by X-ray , is made up of about 70% α helix, with the rest being loops or disordered regions. In classifying proteins by their dominant fold, the [http://scop.mrc-lmb.cam.ac.uk/scop/ Structural Classification of Proteins] database maintains a category specifically for all-α proteins.

Coiled-coil α helices are highly stable forms in which two or more helices wrap around each other in a "supercoil" structure. s contain a highly characteristic sequence motif known as a heptad repeat, in which the motif repeats itself every seven residues along the sequence. The first and especially the fourth residues (known as the "a" and "d" positions) are almost always (the fourth residue is typically ) and pack together in the interior of the helix bundle. The fifth and seventh residues (the "e" and "g" positions) generally have opposing charges and form a salt bridge stabilized by interactions. s such as keratin and myosin often adopt coiled-coil structures, as do several dimerizing proteins. A pair of coiled-coils - a four-helix bundle - is a very common structural motif in proteins. For example, it occurs in human and several varieties of . The Rop protein, which promotes plasmid replication in bacteria, is an interesting case in which a single polypeptide forms a coiled-coil and two monomers assemble to form a four-helix bundle.

α helices have particular significance in binding motifs, including motifs, motifs and motifs. This is because of the convenient structural fact that the diameter of the α helix is 1.2 nanometres, the same as the width of the major groove in B-form .

Homopolymers of amino-acids (such as ) can adopt α-helical structure at low temperature that is "melted out" at high temperatures. This helix-coil transition was once thought to be analogous to protein denaturation. The of this transition can be modeled using an elegant method, characterized by two parameters: the propensity to initiate a helix and the propensity to extend a helix.

The α-helix in fine art

At least two artists have made explicit reference to the α-helix in their work, in painting and in sculpture.

Bay-Area artist , who holds a degree in Microbiology, and a minor in art, has specialized in paintings inspired by microscopic images and molecules since 1990. Her painting "Rise of the Alpha Helix" (2003) features human figures arranged in an α helical arrangement. According to the artist, "the flowers reflect the various types of sidechains that each amino acid holds out to the world". 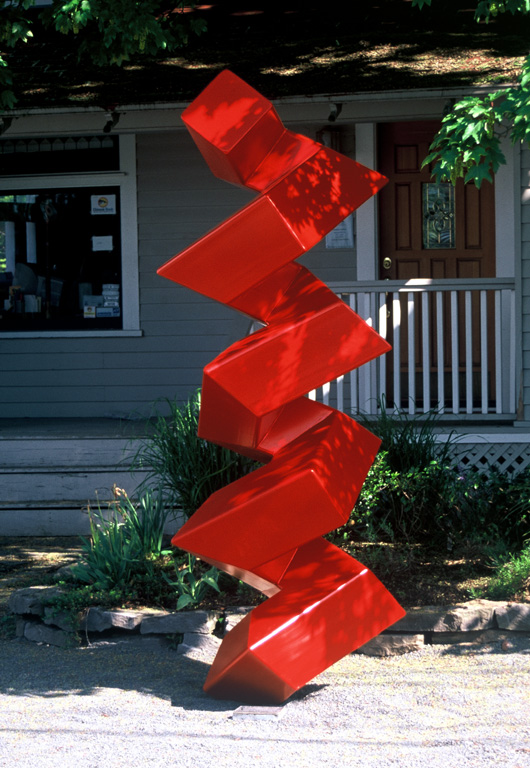 is a German-born sculptor with degrees in experimental physics and sculpture. Since 2001 Voss-Andreae creates "protein sculptures" [cite journal | last = Voss-Andreae| first = J | year = 2005 | title = Protein Sculptures: Life's Building Blocks Inspire Art | journal = Leonardo | volume = 38 | pages = 41&ndash;45 | doi = 10.1162/leon.2005.38.1.41] based on protein structure with the α-helix being one of his preferred objects. Voss-Andreae has made α-helix sculptures from diverse materials including bamboo and whole trees. A monument Voss-Andreae created in 2004 to celebrate thememory of , the discoverer of the α-helix, is fashioned from a large steel beam rearranged in the structure of theα-helix. The 10' (3 m) tall, bright-red sculpture stands in front of Pauling's childhood home in .