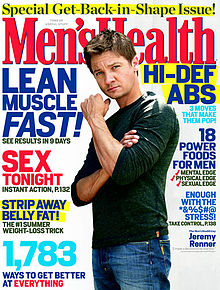 This is a list of magazines primarily marketed to men. The list has been split into subcategories according to the target audience of the magazines. This list includes both 'adult' magazines as well as more mainstream ones. Not included here are automobile and gadget magazines, many of which are primarily aimed towards men.

These publications appeal to a broad heterosexual male audience. Some skew toward men's fashion, others to health. Most are marketed to a particular age and income demographic. In the U.S., some are marketed mainly to a specific ethnic group, such as African Americans or Hispanics, and few magazines such as MenzMag are published online to offer daily buzz to men's entertainment, health, and style needs.

These publications contain content of a sexual nature including nude photography.