Má vlast (traditionally translated as "My Country", though more strictly meaning "homeland") is a set of six symphonic poems composed between 1874 and 1879 by the Czech composer Bedřich Smetana. While it is often presented as a single work in six movements and – with the exception of Vltava– is almost always recorded that way, the six pieces were conceived as individual works. They had their own separate premieres between 1875 and 1880; the premiere of the complete set took place on 5 November 1882 in Prague.

In these works Smetana combined the symphonic poem form pioneered by Franz Liszt with the ideals of nationalistic music which were current in the late nineteenth century. Each poem depicts some aspect of the countryside, history, or legends of Bohemia. 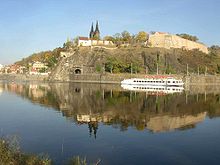 Vyšehrad above the Vltava River

The first poem, Vyšehrad (The High Castle), composed between the end of September and 18 November 1874 and premiered on 14 March 1875, describes the Vyšehrad castle in Prague which was the seat of the earliest Czech kings. During the summer of 1874, Smetana began to lose his hearing, and total deafness quite quickly followed; he woke on the morning of 20 October to find himself completely unable to hear anything. The previous night he had gone to the opera with some hearing still remaining.[1]

The poem begins with the sounds of the harp of the singer Lumír, and then crosses over into the tones of the castle's arsenal. This section of the music introduces the main motifs, which are used in other parts of the cycle. A four note motif (B♭-E♭-D-B♭) represents the castle of Vyšehrad; this is heard again at the end of 'Vltava' and once more, to round the whole cycle off, at the conclusion of 'Blanik'.

In the score two harps are required to perform the opening arpeggios. After a dominant seventh chord, the winds take up the theme, followed by the strings, before the whole orchestra is employed to reach a climax. In the next part, Smetana recalls the story of the castle, using a faster tempo which becomes a march. A seemingly triumphant climax is cut short by a descending passage depicting the collapse of the castle, and the music falls quiet. Then the opening harp material is heard again and the music reminds again of the beauty of the castle, now in ruins. The music ends quietly, depicting the River Vltava flowing below the castle.

Conceived between 1872 and 1874, it is the only piece in the cycle to be mostly completed before Smetana began to go noticeably deaf in the summer of 1874. Most performances last approximately fifteen minutes in duration. 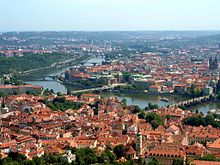 The Vltava in Prague

Vltava, also known by its German name Die Moldau (or The Moldau), was composed between 20 November and 8 December 1874 and was premiered on 4 April 1875. It is about 12 minutes long, and is in the key of E minor.

In this piece, Smetana uses tone painting to evoke the sounds of one of Bohemia's great rivers.[2] In his own words:

The composition describes the course of the Vltava, starting from the two small springs, the Cold and Warm Vltava, to the unification of both streams into a single current, the course of the Vltava through woods and meadows, through landscapes where a farmer's wedding is celebrated, the round dance of the mermaids in the night's moonshine: on the nearby rocks loom proud castles, palaces and ruins aloft. The Vltava swirls into the St John's Rapids; then it widens and flows toward Prague, past the Vyšehrad, and then majestically vanishes into the distance, ending at the Labe (or Elbe, in German).

The piece contains Smetana's most famous tune. It is an adaptation of the melody La Mantovana, attributed to the Italian renaissance tenor Giuseppe Cenci (also known as Giuseppino),[3] which, in a borrowed Moldovan form, was also the basis for the Israeli national anthem, Hatikvah. The tune also appears in major in an old folk Czech song Kočka leze dírou ("The Cat Crawls Through the Hole") and Hans Eisler used it for his "Song of the Moldau".

The third poem was finished on 20 February 1875 and is named for the female warrior Šárka, a central figure in the ancient Czech legend of the Maidens' War. Šárka ties herself to a tree as bait and waits to be saved by the princely knight Ctirad, deceiving him into believing that she is an unwilling captive of the rebelling women. Once released by Ctirad, who has quickly fallen in love with her, Šárka serves him and his comrades with drugged mead and once they have fallen asleep she sounds a hunting horn: an agreed signal to the other women. The poem ends with the warrior maidens falling upon and murdering the sleeping men.

Smetana finished composing this piece, the title of which means "From Bohemia's woods and fields", on 18 October 1875 and received its first public performance nearly eight weeks later, on 10 December. A depiction of the beauty of the Czech countryside, the tone poem tells no real story, but includes, after a section evoking the grandeur of the forest, the depiction of a village festival in full swing.

This piece, which was finished on 13 December 1878 and premiered on 4 January 1880, is named for the city of Tábor in the south of Bohemia founded by the Hussites and serving as their center during the Hussite Wars. The theme for the piece is quoted from the first two lines of the Hussite hymn, "Ktož jsú boží bojovníci" ("Ye Who Are Warriors of God").

Blaník was finished on 9 March 1879 and premiered on 4 January 1880. It is named for the mountain Blaník inside which a legend says that a huge army of knights led by St. Wenceslas sleep. The knights will awake and help the country in its gravest hour (sometimes described as four hostile armies attacking from all cardinal directions).

Musically, Blaník begins exactly as Tábor ends, "hammering" out the motto which was left unresolved, but now continuing on, as if in the aftermath of the battle. Thus these last two tone poems of the cycle form a cohesive pair, as do the first two; the High Castle's theme returns as the Vltava's river journey triumphantly reaches that same destination, and again returns triumphantly at the end of Blaník. Once again, the Hussite hymn used in Tábor is quoted, though this time it is the third line which rings out in the march at the end of the piece. The original lyrics to this line in the hymn are "so that finally with Him you will always be victorious," a reference to the eventual victorious rise of the Czech state.