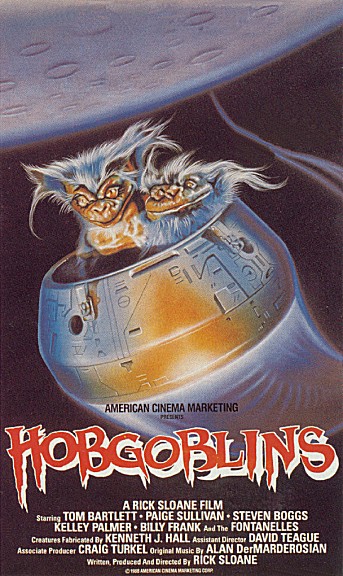 The film opens with a man named Dennis investigating an old vault at an old movie studio. While inside, his fantasy of being a rock star comes to life, but he dies while performing on stage. His boss, Mr. McCreedy, closes the door upon discovering the body.

A young man named Kevin takes the vacant job so that he can impress his girlfriend Amy. After his first shift, he drives home to Amy, finding that his two friends, the sex-crazed Daphne and the dorky Kyle, waiting for him, and Daphne's boyfriend Nick arrives. In one of the film's most commonly mocked scenes, Nick and Kevin fight with rakes in a long, protracted scene. After Kevin loses horribly, Amy berates him for his weaknesses while Daphne and Nick have sex in Nick's van in the background of the scene.

While in pursuit of a the next evening, Kevin stumbles across the vault, which contains a small group of hairy, demonic little aliens &mdash; the hobgoblins. They escape, leaving Kevin stunned. His boss, the elderly Mr. McCreedy, explains that the hobgoblins crash landed on the studio lot decades earlier, and he has been closely guarding them ever since. The hobgoblins have the hypnotic power to make a person's wildest fantasies come true; however, they also kill their victims in the process when people's fantasies turn against them. Precisely why the hobgoblins never affected McCreedy himself in this way is unclear.

Conveniently for the plot, the hobgoblins go straight to Kevin's house, where his friends are partying. The hobgoblins quickly make their fantasies come true, but with dire consequences. Daphne is lured out of the house thinking that she's about to have sex with Nick. She is instead attacked by a Hobgoblin but manages to kill it with a rake. Kyle, while listening to , is also lured outside with the promise of sex; he drives a prostitute (really a phantom created by the hobgoblins) to the local make-out spot, but the prostitute wants to kill him instead, and Kevin rescues him before his car is pushed over a cliff.

The quiet, prudish Amy's fantasy leads her to the sleazy Club Scum. Kevin and the others follow her there, and the film is interrupted for an unintelligible musical number by the Fontanelle's ("Kiss Kicker '99". [ [http://www.imdb.com/title/tt0089280/soundtrack Hobgoblins (1988) - Soundtracks ] ] ) It turns out that Amy's deepest fantasy is to lose her sexual inhibitions and be a . While on stage, she launches into a speech about how she wants to be objectified by men, arguably a case of the hobgoblins corrupting her fantasy by taking it too far.

The nightclub erupts into chaos while Kevin and his friends try to kill the rampaging hobgoblins. Nick is given a fantasy in which he leads a commando raid. In the melee, Nick is set on fire by a hand grenade thrown by his commanding officer and is apparently killed (again, his fantasy goes to extremes and turns against him), though he returns later in the movie, bandaged and on crutches, but otherwise unharmed. Kevin kills the hobgoblin in control of Amy before she can have sex with the scruffy bouncer Roadrash (). Although Amy is restored to her original personality, her experience leaves her less sexually repressed than she was before.

Thinking that all the hobgoblins are dead, Kevin, Amy, Kyle, and Daphne return to the lot to report back to Mr. McCreedy. Kevin is confronted by the burglar from earlier that night and beats him in a fight, finally proving his bravery to Amy. Kevin's victory is short lived as the burglar (yet another phantom created by the hobgoblins) pulls a gun from an ankle holster and aims it at Kevin. Just as the burglar is about to fire, McCreedy shoots the alien, thus saving Kevin's life. The remaining hobgoblins run back into the vault, which McCreedy has filled with explosives. The hobgoblins are blown up, though the question of why McCreedy did not simply do that to begin with goes unanswered. Amy promises to have sex with Kevin, Nick returns to have sex with Daphne, and Kyle, odd man out, asks to use McCreedy's phone, presumably for more phone sex.

This was the first feature film for many players who went on to much bigger roles.

* , who played the Club Scum bouncer Roadrash, went on to play Maynard in Quentin Tarantino's "Pulp Fiction" and Boss Man in .
* , who played the Club Scum MC, went on to a successful career as a voice actor. He was the voice of Spottswoode in ', Vincent in ' and numerous Nickelodeon shows, including Cosmo on Fairly OddParents.
* Tami Bakke (aka Tamara Clatterbuck), who played phone sex operator Fantazia, later played Alice Johnson on "" (1999) and Barb Reiber on "" (2001). She has also dated .
*, is the stuntmaster who doubled for Nick on fire. He later played the Evil Mummy in starring Bruce Campbell.

"Hobgoblins" is perhaps best known for being shown on episode #907 of "". Despite the fact that the director himself, , offered up the film for ridicule, the "MST3K" writers' jokes and comments were especially brutal. For starters, mad scientist removes the film from a chest looking suspiciously like The Ark of the Covenant, and hints she uses it as means of extreme punishment. (The movie reel case itself has a label reading “Hobgoblins. Caution: May Cause Blindness and Death.”) Immediately after the pre-opening credits sequence, Crow and Servo make several attempts to evacuate the theater, having to be dragged back to their seats by Mike. Halfway through the movie, sets up a crisis hot line for people "traumatized by the film." Later, Mike and the 'bots momentarily escape the theater by placing cardboard cut-outs of themselves in the theater as well as the bridge (apparently fooling everyone except Observer), after which they are sent back. Crow even impersonates Sloane during the end credits, saying he was "a total idiot," "high on crack" during the shooting of the film, and had his brains replaced with "rat droppings." , another robot star of the show, tried to go back in time to assault Sloane in order to prevent the film's production but inadvertently inspires Sloane to make the film. "MST3K" writer Paul Chaplin later commented on "Hobgoblins", saying, "It shoots right to the top of the list of the worst movies we've ever done." [ [http://www.mst3kinfo.com/aceg/9/907/ep907.html Episode 907- Hobgoblins ] ]

The mid-film musical number has also become infamous due to the completely unintelligible lyrics. A running gag during the song is the fact that Mike and the 'bots (and by extension, the audience) can't even make out the song's chorus/title ("Kiss Kicker"), coming up with the conjectured titles "Pig Sticker," "Pig Liquor" (or possibly "Licker"), "Kid Snickers," etc, before finally apparently settling on "Fish Picker."

In the trailer for the film's sequel "", a cover of the song Mike, Crow and Servo's cardboard cut outs sang about the film can be heard toward the end. [ [http://www.youtube.com/watch?v=HI8omyZbfeE Hobgoblins 2 Trailer] ]

* "Hobgoblins" has been released on DVD by Retromedia.

* The "MST3K" version of the film was released by Rhino Home Video as part of the "Collection, Volume 8" DVD set.