Diluvium is a term in geology for superficial deposits formed by flood-like operations of water, and so contrasted with alluvium or alluvial deposits formed by slow and steady aqueous agencies. The term was formerly given to the boulder clay deposits, supposed to have been caused by the Noachian deluge. 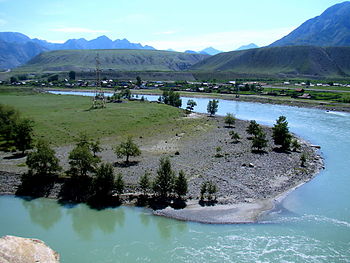 In the late 20th century Russian geologist Alexei Rudoy proposed the term "diluvium" for description of deposits created as a result of catastrophic outbursts of Pleistocene giant glacier-dammed lakes in intermontane basins of the Altai.[1] The largest of these lakes - Chuya and Kuray, had a volume of water in hundreds of cubic kilometers, and their discharge in peak hydrograph flow rate exceeded the maximum rates of the well-known Pleistocene Lake Missoula in North America. The term "diluvium" in the meaning of A. N. Rudoy has become accepted, and the process of diluvial morpholithogenesis can be found in modern textbooks.

Flood deposits of the Altai region

Nearly all intermountain depressions in southern Siberia and northern Mongolia hosted glacier-dammed lakes during the Pleistocene ice ages. Climatic changes and hydrostatic alterations of the ice dams were followed by repeated fillings and releases of the basin lakes. The lake outbursts had a cataclysmic character. In accordance with climatic conditions, the glaciers would protrude again into the main drainage valleys immediately after dam deformations and lake outbursts and would again dam the basins.

The greatest of the lakes (Lakes Chuya, Kuray, Uymon, Darkhat and others) achieved volumes up to hundreds of cubic kilometres, while the discharges of the outburst floods reached millions of cubic metres per second. These floods transformed the drainage valleys, repeatedly building new sediment deposits. The dating of the latter proves the occurrence of large-scale floods in the Chuya and the Katun River valleys in the interval between 23 and 7 thousand years ago. During that period there were at least five large-scale flooding events. Enormous water masses were drained simultaneously and repeatedly towards the south of West Siberia. The total water volume out of the Altai basins only used to reach 10 thousand cubic kilometres. With some periodicity, all of the basins of South Siberia were able to deliver northwards about 60 thousand cubic kilometres of flood waters [2].