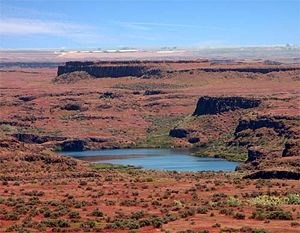 The Channeled Scablands are a unique geological erosion feature in the U.S. state of Washington. They were created by the cataclysmic Missoula Floods that swept periodically across eastern Washington and down the Columbia River Plateau during the Pleistocene epoch. Geologist J Harlen Bretz coined the term in a series of papers in the 1920s. Debate over the origin of the Scablands raged for four decades and is one of the great debates in the history of earth science. The Scablands are also important to planetary scientists as perhaps the best terrestrial analog for the Martian outflow channels.[1]

River valleys formed by erosion normally have a 'V' cross section, and glaciers leave a 'U' cross section. The Channeled Scablands have a rectangular cross section and are spread over immense areas of eastern Washington. They exhibit a unique drainage pattern that appears to have an entrance in the northeast and an exit in the southwest. The eroded channels also show an anastomosing, or braided, appearance. There are also immense potholes and ripple marks, much larger than those found on ordinary rivers. When first studied, no known theories could explain the origin of these features.

Bretz conducted research and published many papers during the 1920s describing the Channeled Scablands. His theories of how they were formed required short but immense water flows (500 cubic miles of water), for which Bretz had no explanation (the source of the water was never the focus of his research). Bretz's theories met with vehement opposition from geologists of the day, who tried to explain the features with uniformitarian theories.

J.T. Pardee first suggested in 1925 to Bretz that the draining of a glacial lake could account for flows of the magnitude needed. Pardee continued his research over the next 30 years, collecting and analyzing evidence that eventually identified Lake Missoula as the source of the Spokane Floods and creator of the Channeled Scablands.

Pardee's and Bretz's theories were accepted only after decades of painstaking work and fierce scientific debate. In 1979 Bretz received the highest medal of the Geological Society of America, the Penrose Medal, to recognize that he had developed one of the great ideas in the earth sciences.