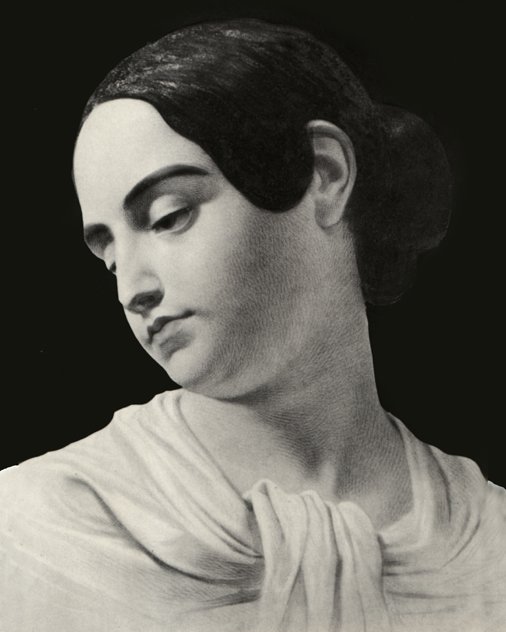 Virginia Eliza Clemm Poe (born Virginia Eliza Clemm) (August 22, 1822 &ndash; January 30, 1847) was the wife of . The couple were first cousins and married when Virginia Clemm was 13 and Poe was 27. Some biographers have suggested that the couple's relationship was more like that between brother and sister than like husband and wife and that they never consummated their marriage. Beginning in January 1842, she struggled with for several years. She died of the disease in January 1847 at the age of 24 in the family's cottage outside .

Along with other family members, Virginia Clemm and Edgar Allan Poe lived together off and on for several years before their marriage. The couple often moved to accommodate Poe's employment, living intermittently in Baltimore, Philadelphia, and New York. A few years after their wedding, Poe was involved in a substantial scandal involving and . Rumors about alleged amorous improprieties on her husband's part affected Virginia Poe so much that on her deathbed she claimed that Ellet had murdered her. After her death, her body was eventually placed under the same memorial marker as her husband in in . Only one image of Virginia Eliza Clemm Poe has been authenticated: a watercolor portrait painted after her death.

The disease and eventual death of his wife had a substantial impact on Edgar Allan Poe, who became despondent and turned to drink to cope. Her struggle with illness and death are believed to have impacted his poetry and prose, where dying young women appear as a frequent motif, as in "".

Edgar Poe first met his cousin Virginia in August 1829, four months after his discharge from the Army. She was seven at the time.

In August 1835, Poe left the destitute family behind and moved to to take a job at the "". [Sova, 225] While Poe was away from Baltimore, another cousin, Neilson Poe, the husband of Virginia's half-sister Josephine Clemm,

Marriage plans were confirmed and Poe returned to Baltimore to file for a marriage license on September 22, 1835. The couple may have been quietly married as well, though accounts are unclear.

Debate has raged regarding how unusual this pairing was based on the couple's age and blood relationship. Noted Poe biographer Arthur Hobson Quinn argues it was not particularly unusual, nor was Poe's nicknaming his wife "Sissy" or "Sis". [Hoffman, 26] Another Poe biographer, , contends that though their first-cousin marriage was not unusual, her young age was.

Virginia and Poe were by all accounts a happy and devoted couple. Poe's one-time employer wrote of their relationship: "His love for his wife was a sort of rapturous worship of the spirit of beauty." [Oberholtzer, 299] Poe once wrote to a friend, "I see no one among the living as beautiful as my little wife." [Phillips, 1184] She, in turn, by many contemporary accounts, nearly idolized her husband. [Hoffman, 318] She often sat close to him while he wrote, kept his pens in order, and folded and addressed his manuscripts. [Phillips, 1183] She showed her love for Poe in an poem she composed when she was 23, dated February 14, 1846:

The "tattling of many tongues" in Virginia's Valentine poem was a reference to actual incidents. [Moss, 214] In 1845, Poe had begun a flirtation with , a married 34-year-old poet. [Silverman, 280] Virginia was aware of the friendship and may even have encouraged it.

At the same time, another poet, , became enamored of Poe and jealous of Osgood.

Though these letters had already been returned to her, Ellet asked her brother "to "demand of me the letters".

Osgood's husband stepped in and threatened to sue Ellet unless she formally apologized for her insinuations. She retracted her statements in a letter to Osgood saying, "The letter shown me by Mrs Poe "must have been a forgery" created by Poe himself. [Moss, 215] She put all the blame on Poe, suggesting the incident was because Poe was "intemperate and subject to acts of lunacy".

By this time, Virginia had developed , first seen sometime in the middle of January 1842. While singing and playing the piano, Virginia began to bleed from the mouth, though Poe said she merely "ruptured a blood-vessel". [Silverman, 179] Her health declined and she became an invalid, which drove Poe into a deep depression, especially as she occasionally showed signs of improvement. In a letter to friend John Ingram, Poe described his resulting mental state: "Each time I felt all the agonies of her death&mdash;and at each accession of the disorder I loved her more dearly & clung to her life with more desperate pertinacity. But I am constitutionally sensitive&mdash;nervous in a very unusual degree. I became insane, with long intervals of horrible sanity." [Meyers, 208]

Virginia's condition may have been what prompted the Poe family to move, in the hopes of finding a healthier environment for her. They moved several times within in the early 1840s and their last home in that city is now preserved as the in Spring Garden.

In May 1846, the family (Poe, Virginia, and her mother, Maria) moved to a small in Fordham, about fourteen miles outside the city, [Meyers, 322] a home which is still standing today. In what is the only surviving letter from Poe to Virginia, dated June 12, 1846, he urged her to remain optimistic: "Keep up your heart in all hopelessness, and trust yet a little longer." Of his recent loss of the "Broadway Journal", the only magazine Poe ever owned, he said, "I should have lost my courage "but for you"&mdash;my darling little wife you are my "greatest" and "only" stimulus now to battle with this uncongenial, unsatisfactory and ungrateful life."

, a friend of Poe's and an influential editor, published an announcement on December 30, 1846, requesting help for the family, though his facts were not entirely correct:

Willis, who had not corresponded with Poe for two years and had since lost his own wife, was one of his greatest supporters in this period. He sent Poe and his wife an inspirational Christmas book, "The Marriage Ring; or How to Make a Home Happy".

The announcement was similar to one made for Poe's mother, , during her last stages of tuberculosis.

Virginia was described as having dark hair and violet eyes, with skin so pale it was called "pure white", [Krutch, 55–56] causing a "bad complexion that spoiled her looks".

While dying, Virginia asked her mother: "Darling... will you console and take care of my poor Eddy&mdash;you will "never never" leave him?" [Silverman, 420] Her mother stayed with Poe until his own death in 1849. As Virginia was dying, the family received many visitors, including an old friend named Mary Starr. At one point Virginia put Starr's hand in Poe's and asked her to "be a friend to Eddy, and don't forsake him".

Only one image of Virginia is known to exist, for which the painter had to take her corpse as model.

In 1875, the same year in which her husband's body was reburied, the cemetery in which she lay was destroyed and her remains were almost forgotten. An early Poe biographer, William Gill, gathered the bones and stored them in a box he hid under his bed. [Meyers, 263] Gill's story was reported in the "" twenty-seven years after the event: he says that he had visited the Fordham cemetery in 1883 at exactly the moment that the sexton Dennis Valentine held Virginia's bones in his shovel, ready to throw them away as unclaimed. Poe himself had died in 1849, and so Gill took Virginia's remains and, after corresponding with Neilson Poe and John Prentiss Poe in Baltimore, arranged to bring the box down to be laid on Poe's left side in a small bronze casket.

Impact and influence on Poe

Virginia's death had a significant impact on Poe. After her death, Poe was deeply saddened for several months. A friend said of him, "the loss of his wife was a sad blow to him. He did not seem to care, after she was gone, whether he lived an hour, a day, a week or a year; she was his all." [Meyers, 207] A year after her death, he wrote to a friend that he had experienced the greatest evil a man can suffer when, he said, "a wife, whom I loved as no man ever loved before", had fallen ill.

Poe regularly visited Virginia's grave. As his friend Charles Chauncey Burr wrote, "Many times, after the death of his beloved wife, was he found at the dead hour of a winter night, sitting beside her tomb almost frozen in the snow". [Phillips, 1206] Shortly after Virginia's death, Poe courted several other women, including Nancy Richmond of , of , and childhood sweetheart in Richmond. Even so, Frances Sargent Osgood, who Poe also attempted to woo, believed "that [Virginia] was the only woman whom he ever loved". [Krutch, 57]

Many of Poe's works are interpreted autobiographically, with much of his work believed to reflect Virginia's long struggle with tuberculosis and her eventual death. The most discussed example is "". This poem, which depicts a dead young bride and her mourning lover, is often assumed to have been inspired by Virginia, though other women in Poe's life are potential candidates including Frances Sargent Osgood [Meyers, 244] and Sarah Helen Whitman. [Sova, 12] A similar poem, "", is also believed to be a memorial tribute to Virginia, [Meyers, 211] as is "", whose title character is described as "the most lovely dead that ever died so young!" [Silverman, 202] After Poe's death, of the London-based "Critic" said Poe was responsible for his wife's death, "hurrying her to a premature grave, that he might write 'Annabel Lee' and ''". [Campbell, Killis. "The Poe-Griswold Controversy", "The Mind of Poe and Other Studies". New York: Russell & Russell, Inc., 1962: 79.]

Virginia is also seen in Poe's prose. The "Eleonora" (1842)&mdash;which features a narrator preparing to marry his cousin, with whom he lives alongside her mother&mdash;may also reference Virginia's illness. When Poe wrote it, his wife had just begun to show signs of her illness. [Sova, 78] It was shortly thereafter that the couple moved to New York City by boat and Poe published "The Oblong Box" (1844). This story, which shows a man mourning his young wife while transporting her corpse by boat, seems to suggest Poe's feelings about Virginia's impending death. As the ship sinks, the husband would rather die than be separated from his wife's corpse. [Silverman, 228–229] The short story "", whose title character suffers a slow and lingering death, may also be inspired by Virginia. [Hoffman, 255–256] After her death, Poe edited his first published story, "", to remove the narrator's line, "I would wish all I love to perish of that gentle disease."