/ˌkærəˈɡiːnənz/ karr-ə-ghee-nənz) are a family of linear sulfated polysaccharides that are extracted from red seaweeds. There are several varieties of carrageen used in cooking and baking. Kappa-carrageenan is used mostly in breading and batter due to its gelling nature. Lambda carrageenan is a non gelling variety that assists in binding, retaining moisture and in contributing to viscosity in sweet doughs. Iota carrageenan is used primarily in fruit applications and requires calcium ions to develop a heat-reversible and flexible gel.[1]

Gelatinous extracts of the Chondrus crispus seaweed have been used as food additives for hundreds of years.[2] Carrageenan is a vegetarian and vegan alternative to gelatin. 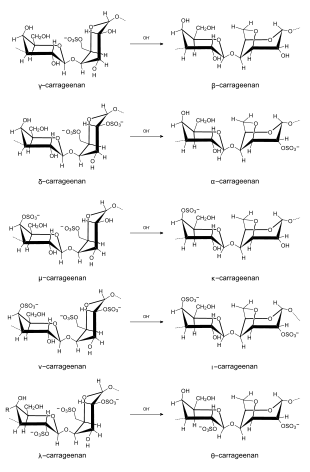 The molecular structures of different types of carrageenan.

Carrageenans are large, highly flexible molecules that curl forming helical structures. This gives them the ability to form a variety of different gels at room temperature. They are widely used in the food and other industries as thickening and stabilizing agents. A particular advantage is that they are pseudoplastic—they thin under shear stress and recover their viscosity once the stress is removed. This means that they are easy to pump but stiffen again afterwards.

All carrageenans are high-molecular-weight polysaccharides made up of repeating galactose units and 3,6 anhydrogalactose (3,6-AG), both sulfated and nonsulfated. The units are joined by alternating alpha 1-3 and beta 1-4 glycosidic linkages.

There are three main commercial classes of carrageenan:

All are soluble in hot water, but, in cold water, only the lambda form (and the sodium salts of the other two) are soluble.

When used in food products, carrageenan has the EU additive E-number E407 or E407a when present as "processed eucheuma seaweed", and is commonly used as an emulsifier. In parts of Scotland (where it is known as (An) Cairgean in Scottish Gaelic) and Ireland (variety used is Chondrus Crispus known in Irish Gaelic variously as carraigín [little rock], fiadháin [wild stuff], clúimhín cait [cat's puff], mathair an duilisg [mother of seaweeds], ceann donn [red head]), it is known as Carrageen Moss it is boiled in milk and strained, before sugar and other flavourings such as vanilla, cinnamon, brandy, or whisky are added. The end-product is a kind of jelly similar to pannacotta, tapioca, or blancmange. When iota carrageenan is combined with sodium stearoyl lactylate (SSL), a synergistic effect is created, allowing for stabilizing/emulsifying not obtained with any other type of carrageenan (kappa/lambda) or with other emulsifiers (mono and diglycerides, etc.). SSL combined with iota carrageenan is capable of producing emulsions under both hot and cold conditions using either vegetable or animal fat.

Although carrageenans were introduced on an industrial scale in the 1930s, they were first used in China around 600 BC (where Gigartina was used) and in Ireland around 400 AD.[citation needed]

The largest producer currently is the Philippines, where cultivated seaweed produces about 80% of the world supply.[3] The most commonly used are E. cottonii (Kappaphycus alvarezii, K.striatum) and E. spinosum (Eucheuma denticulatum), which together provide about three-quarters of the world production. These grow from the sea surface to a depth of about 2 metres. The seaweed is normally grown on nylon lines strung between bamboo floats, and is harvested after three months or so, when each plant weighs around 1 kg.

The E. cottonii variety has been reclassified as Kappaphycus cottonii by Maxwell Doty (1988), thereby introducing the genus Kappaphycus, on the basis of the phycocolloids produced (namely kappa carrageenan).[citation needed]

After harvest, the seaweed is dried, baled, and sent to the carrageenan manufacturer. There the seaweed is ground, sifted to remove impurities such as sand, and washed thoroughly. After treatment with hot alkali solution (e.g., 5-8% potassium hydroxide), the cellulose is removed from the carrageenan by centrifugation and filtration. The resulting carrageenan solution is then concentrated by evaporation. It is dried and ground to specification.

There are three types of processing:

This is only performed using E. cottonii or E. spinosum. The raw weed is first sorted and crude contaminants are removed by hand. The weed is then washed to remove salt and sand, and then cooked in hot alkali to increase the gel strength. The cooked weed is washed, dried, and milled. E. spinosum undergoes a much milder cooking cycle, as it dissolves quite readily. The product is called semirefined carrageenan, Philippines natural grade or, in the USA, it simply falls under the common carrageenan specification.[4]

The essential difference in the refining process is that the carrageenan is dissolved and filtered to remove cell wall debris. The clear solution is then precipitated either by alcohol or by potassium chloride.[5]

A hybrid technology in which weed is treated heterogeneously as in the semirefined process exists, but alcohol or high salt levels are used to inhibit dissolution. This process is often used on South American weeds and gives some of the cost benefits of semirefined processing, while allowing a wider range of weeds to be processed. However, the naturally low cellulose levels in some South American weeds allow them to be heterogeneously processed and still be sold under the EU refined specification. 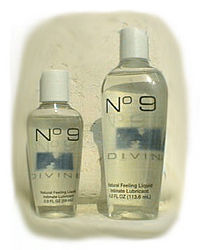 Personal lubricant made from carrageenan.

Studies at the Laboratory of Cellular Oncology, National Cancer Institute, Bethesda, Maryland, United States of America suggest that carrageenans might function as a topical microbicide.

There are indications a carrageenan-based gel may offer some protection against HSV-2 transmission by binding to the receptors on the herpes virus, thus preventing the virus from binding to cells. Research has shown a carrageenan-based gel effectively prevented HSV-2 infection at a rate of 85% in a mouse model.[6] Some personal and condom lubricants are already made with carrageenan, and several of these products (such as Divine) were found to be potent HPV inhibitors in the study (though others that listed carrageenan in their ingredients were not).[7] See Herpes simplex: Polysaccharides

Laboratory studies have shown carrageenans are extremely potent inhibitors of HPV infection in vitro and in animal challenge models.[8] Clinical trial results announced at the 2010 International Papillomavirus Conference held in Montreal, Canada indicate a carrageenan-based personal lubricant called Carraguard is effective for preventing HPV infection in women.[9] The clinical results suggest the use of carrageenan-based personal lubricant products, such as Divine No 9 and BIOglide[10] may likewise be effective for preventing HPV infection.

A phase 3 clinical trial by the Population Council examined whether a carrageenan-based product known as Carraguard was effective as a topical microbicide for blocking HIV infection in women.[6] The trial ran from 2004 to 2007, with more than 4,000 South African women completing the study, but found no statistical difference in infection between those having used the lubricant and those not having used the lubricant.[11][12] The trial did provide information about usage patterns, however, and showed that the gel is safe at least—not increasing infection any more than the baseline or causing significant side-effects. As such, they expect to use it as a stable delivery vehicle for experimental antiretrovirals in future studies.

Concurrent studies in macaques found the same carrageenan gels used in clinical trials to be effective against SIV challenge. This was in direct contrast of in vitro findings, where the compound was found to enhance HIV and SIV infections in various assays. Although compliance was believed to be one issue in clinical versus animal trials, the high viscosity and controlled nature of animal-viral inoculations (atraumatic introduction of virus using a French catheter) may be why the latter animal study observed a positive outcome.[13]

Clinical studies have shown carrageenans are also the first substances found to be active against common cold viruses (and not just the symptoms of the cold). Marinomed Biotechnologie, an Austrian company, conducted a study in 2010 showing that their nasal spray, which contains Carrageenan, was effective as a treatment against the viral cause (rather than the symptoms) of the common cold.[14]

The Joint FAO/WHO expert committee on food additives states that, "based on the information available, it is inadvisable to use carrageenan or processed eucheuma seaweed in infant formulas".[15] There is evidence from studies performed on rats, guinea pigs, and monkeys that indicates that degraded carrageenan (poligeenan) may cause ulcerations in the gastro-intestinal tract and gastro-intestinal cancer.[16] Poligeenan is produced from carrageenan subjected to high temperatures and acidity. The average carrageenan molecule weighs over 100,000 Da while poligeenans have a molecular weight of less than 50,000 Da. A scientific committee working on behalf of the European Commission has recommended that the amount of degraded carrageenan be limited to a maximum of 5% (which is the limit of detection) of total carrageenan mass. Upon testing samples of foods containing high molecular weight carrageens, researchers found no poligeenan.[17]

A recent publication[18] indicates that carrageenan induces inflammation in human intestinal epithelial cells in tissue culture through a BCL10-mediated pathway that leads to activation of NFkappaB and IL-8. Carrageenan may be immunogenic due to its unusual alpha-1,3-galactosidic link that is part of its disaccharide unit structure. Consumption of carrageenan may have a role in intestinal inflammation and possibly inflammatory bowel disease, since BCL10 resembles NOD2, mutations of which are associated with genetic proclivity to Crohn's Disease.

Carrageenan is reported to interfere with macrophage activity.[19][20][21]