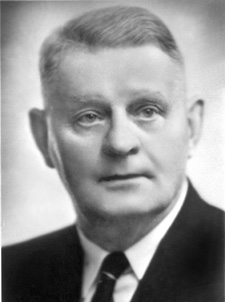 When the swept to power in the 1921 election, they did not have a leader. Following the election, the UFA looked for someone to become premier of the province. , the UFA President, declined the position. was approached, but since he was a lawyer rather than a farmer, he declined.

Greenfield was president of the Alberta Association of Municipal Districts and an interim Vice-President of the UFA. He hailed from Westlock, in northern Alberta, where the UFA had less support. Previously he had been a municipal politician in Alberta and Ontario. He was asked to lead the party, and accepted, becoming Premier of Alberta in 1921. Because he had not run in the 1921 election, he had to enter the legislature through a . Greenfield's government improved roads, schools and hospitals. It also repealed , and established the Alberta Liquor Control Board to regulate the sale of alcohol. The government reneged on a promise, however, to establish a government-owned bank that would issue low-interest loans to farmers.

Divisions arose between the government and UFA on policy issues. As well, beginning in 1923, Greenfield was often absent due to illness. In November 1925, UFA Members of the approached Brownlee about becoming the new Premier, and Greenfield agreed to resign.

[http://greenfield.epsb.ca/ Greenfield School] , an elementary school for Kindergarten to Grade 6 students in south Edmonton, was named for Herbert Greenfield. A painting of Greenfield hangs in the school office.

In Canada, he worked in the oil fields near Sarnia, , and as a farmer in Weston. In 1904, Greenfield went west for economic reasons, and homesteaded near . He found work in a lumber mill, and would later turn to farming. His first year in Alberta, a fire destroyed his home, and he and his wife spent the winter in an abandoned . In 1906, they resettled to a large home four kilometers south of Westlock.

While still living in Ontario, Greenfield had married Elizabeth Harris February 28, 1900. The couple would have two sons, Franklin Harris Greenfield and Arnold Leake Greenfield. In 1922, while Greenfield was Premier, Elizabeth died suddenly as a result of routine surgery, devastating him. [Jones 71-72] He remarried in 1926, to Marjorie Greenwood Cormack, who had two children of her own.

Herbert Greenfield entered public life on a local level soon after moving to his new farm. He was elected to the local school board, where he spent twelve years, including stints as chair, secretary, and treasurer. He also served as Vice President of the Alberta Educational Association. He served as President of the Westlock Agricultural Society and as co-founder and President of the Alberta Association of Municipal Districts. [cite book |first=Bradford |last=Rennie |title=The Rise of Agrarian Democracy: The United Farmers and Farm Women of Alberta, 1909–1921 |year=2000 |publisher=University of Toronto Press, Incorporated |location=, |pages=178 |isbn=0-8020-8374-9] He served as an officer of the province-wide Association of Local Improvement Districts, which advocated for such reforms as a change to an eight hour work day (from ten), on the grounds that many LIDs were having trouble competing with railways for labour. [Rennie 72]

meeting of the UFA caucus selected Greenfield as its choice, and he took office as Premier August 13, 1921.

to ask when he might have the chance to speak against. [Jones 69-70] Despite the UFA's nominal majority position (and the four Labour MLAs' generally supportive approach to the government), many votes went against the government.

Greenfield became Premier at a time of agricultural depression, especially in the province's south.

The government did not give up on addressing the problem when it ended subsidies. It had previously commissioned a number of studies on the agricultural situation and related factors, and converted some of the results of these studies into legislation. The "Debt Adjustment Act" of 1923 was designed to adjust farmers' debts to a level that they could actually pay, thus allowing them to carry on while still ensuring that creditors received as much as was feasible. [Jones 63–64] In the words of professor David C. Jones, the bill offered "solace, but no real satisfaction".

According to Jones, Greenfield's attempts to rescue southern Alberta from agricultural calamity were probably doomed to failure.

During Greenfield's premiership, Alberta's major non-agricultural industry was , and the industry was not prospering. Production was more than 50% greater than demand, and fewer than half of the province's mines were profitable. The industry as a whole was earning a profit of less than one cent per ton of coal. While miners' wages had more than doubled (in nominal terms) between 1909 and 1920, in the 1920s mine owners began to roll them back.

, who took the side of the miners and objected to the government's provision of police escorts for strikebreakers. Though the problems originated before Greenfield took office, many Albertans felt that a stronger leader might have been more successful than Greenfield in appealing for peace.

Prohibition had been introduced in Alberta following a 1916 referendum, during which the UFA had advocated for the prohibitionist side. [cite book |last=Jaques |first=Carrol |editor=Bradford J. Rennie |title=Alberta Premiers of the Twentieth Century |year=2004 |publisher=Canadian Plains Research Center, University of Regina |location= |isbn=0-88977-151-0 |pages=49 |chapter=Charles Stewart ] By 1920, however, it was becoming apparent that the policy was not working (or, as the noted, "Prohibition is now working smoothly. The only thing left is to stop the sale of liquor!"). Greenfield's own MLAs began to grumble about the policy - expressed in 1923 the view that "This government has acted as philosopher, guide, and God to the people long enough."