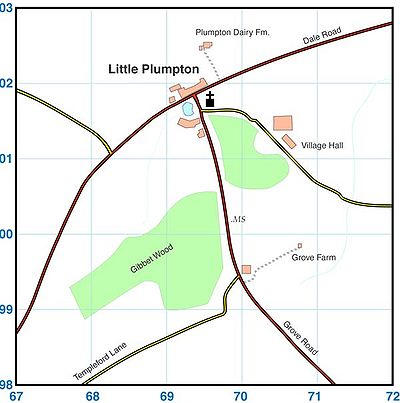 Grids may be arbitrary, or based on specific distances, for example the United Kingdom Ordnance Survey maps use a one-kilometre square grid spacing.

A grid reference locates a unique point on the map. The precision of location varies, for example a simple town plan may use a simple grid system with single letters for Eastings and single numbers for Northings. A grid reference in this system, such as 'H3', locates a particular square rather than a single point.

For Ordnance Survey maps, each Easting and Northing grid line is given a two-digit code, based on the British national grid reference system with origin point just off the southwest coast of the United Kingdom. Since the Eastings and Northings are one kilometre apart, a combination of a Northing and an Easting will give a four-digit grid reference describing a one-kilometre square on the ground. In the example map below, the town Little Plumpton lies in the square 6901, even though the writing labeling the town is in 6802 and 6902, most of the buildings (the orange boxed symbols) are in square 6901.

The more digits added to a grid reference, the more precise the reference becomes. To locate a specific building in Little Plumpton, a further two digits are added to the four-digit reference to create a six-digit reference. The extra two digits describe a position within the 1-kilometre square. Imagine (or draw or superimpose a Romer) a further 10x10 grid within the current grid square. Any of the 100 squares in the superimposed 10 x 10 grid can be accurately described using a digit from 0-9 (with 0 0 being the bottom left square and 9 9 being the top right square). for the church in Little Plumpton this gives the digits 6 and 7 (6 on the left to right axis (Eastings) and 7 on the bottom to top axis (Northings). These are added to the four-figure grid reference after the two digits describing the same coordinate axis, and thus our six-figure grid reference for the church becomes 696017. This reference describes a 100-metre by 100-metre square, and not a single point, but this precision is usually sufficient for navigation purposes. The symbols on the map are not precise in any case, for example the church in the example above would be approximately 100x200 metres if the symbol was to scale, so in fact the middle of the black square represents the map position of the real church, completely independent of the actual size of the church,

Grid references comprising larger numbers for greater precision could be determined using large-scale maps and an accurate Romer. This might be used in surveying but is not generally used for land navigating for walkers or cyclists etc. The growing availability and decreasing cost of handheld GPS receivers enables determination of accurate grid references without needing a map, but it is important to know how many digits the GPS displays to avoid reading off just the first six digits. A GPS unit commonly gives a ten-digit grid reference, based on two groups of five numbers for the Eastings and Northing values. Each successive increase in accuracy (from 6 digit to 8 digit to 10 digit) pinpoints the location by a factor of 10. Since, in the UK at least, a 6-figure grid reference identifies a square of 100-metre sides, an 8-figure reference would identify a 10-metre square, and a 10-digit reference a 1-metre square. In order to give a standard 6-figure grid reference from a 10-figure GPS readout, the 4th, 5th, 9th and 10th digits must be omitted so it is important not to read just the first 6 digits.