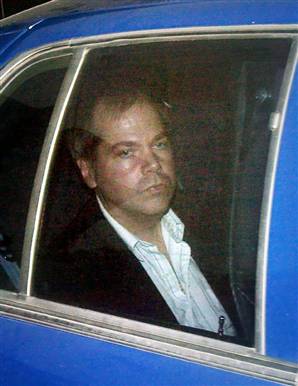 John Warnock Hinckley, Jr. (born ) is a United States citizen who attempted to assassinate U.S. President Ronald Reagan in on , as the culmination of an effort to impress actress . He was found not guilty by reason of insanity and has remained under institutional psychiatric care since then.

After repeated viewings of the 1976 movie "", in which a disturbed protagonist, , played by , plots to assassinate a presidential candidate, Hinckley developed an obsession with actress , who had played a in the film. [ [http://www.law.umkc.edu/faculty/projects/ftrials/hinckley/taxidriver.htm Taxi Driver: Its Influence on John Hinckley, Jr.] ] The Bickle character was in turn based on the diaries of , the attempted assassin of . When Foster entered , Hinckley moved to for a short time to be nearer to her, slipping poems and messages under her door and repeatedly contacting her by telephone.

Failing to develop any meaningful contact with Foster, Hinckley developed such plots as hijacking an airplane and committing suicide in front of her to gain her attention. Eventually he settled on a scheme to win her over by assassinating the president, with the theory that as a historical figure, he would be her equal. To this end, he trailed President from state to state, but was arrested in on a firearms charge. Penniless, he returned home once again, and despite treatment for depression, his mental health did not improve. In 1981, he began to target the newly elected president, . It was also at this time that he started collecting information on , 's assassin, whom he saw as a role model.

"Over the past seven months I've left you dozens of poems, letters and love messages in the faint hope that you could develop an interest in me. Although we talked on the phone a couple of times I never had the nerve to simply approach you and introduce myself. [...] the reason I'm going ahead with this attempt now is because I cannot wait any longer to impress you."

According to the , , edition of the "", and reported by AP, UPI, and "", Hinckley is the son of one of 's political and financial supporters in his 1980 presidential primary campaign against Ronald Reagan; John Hinckley Jr.'s elder brother, Scott Hinckley, and Vice President Bush's son had a dinner appointment scheduled for the next day. [Bush's Son Was To Dine With Suspect's Brother, by Arthur Wiese and Margaret Downing, "The Houston Post", March 31, 1981]

"The family of the man charged with trying to assassinate President Reagan is acquainted with the family of Vice-President George Bush and had made large contributions to his political campaign ... Scott Hinckley, brother of John W. Hinckley Jr. was to have dined tonight in Denver at the home of Neil Bush, one of the Vice-President's sons ... "The " said it was unable to reach Scott Hinckley, vice-president of his father's Denver-based firm, Energy Corporation, for comment. Neil Bush lives in , where he works for of . In 1978, Neil Bush served as campaign manager for his brother, , the Vice-President's eldest son, who made an unsuccessful bid for Congress. Neil lived in , throughout much of 1978, where John Hinckley lived from 1974 through 1980."

On , , Hinckley fired a Röhm RG-14 six times at Reagan as he left the Hilton Hotel in after addressing an conference. The gun, which cost $47.00, was manufactured by Röhm Gesellschaft, a West German company, and assembled in Miami by its American subsidiary, R.G. Industries, Inc. [The Gun: A Saturday Night Special From Miami, by Pete Earley, "Washington Post", March 31, 1981. Retrieved 28 February, 2007.] ATF agents determined that the gun was bought at Rocky's Pawn Shop in Dallas, Texas. [Guns Traced in 16 Minutes to Pawn Shop in Dallas, Charles Mohr, "New York Times", April 1, 1981. Retrieved February 28, 2007.] It was loaded with six Devastator rounds, which have -filled centers within lacquer-sealed aluminum tips designed to explode on impact, though all failed to do so. [cite news |title=The Exploding Bullets |url=http://pqasb.pqarchiver.com/washingtonpost_historical/access/142619462.html?dids=142619462:142619462&FMT=ABS&FMTS=ABS:FT |author=Pete Barley and Charles Babcock |publisher= |date=1981-04-04 |accessdate=2007-02-28]

Hinckley wounded press secretary , police officer , and Secret Service agent . He did not directly hit Reagan, but the president was seriously wounded when a bullet ricocheted from the bulletproof glass of the presidential limousine and hit him in the chest.

At the trial in 1982, charged with 13 offenses, Hinckley was found not guilty by reason of insanity on . The defense reports found him to be insane while the prosecution reports declared him legally sane.Hinckley was confined at in Washington, D.C.

The verdict led to widespread dismay; as a result, the and a number of states rewrote the law regarding the . , , , and have abolished the defense altogether. [ [http://www.law.umkc.edu/faculty/projects/ftrials/hinckley/hinckleyinsanity.htm The John Hinckley Trial & Its Effect on the Insanity Defense] by Kimberly Collins, Gabe Hinkebein, and Staci Schorgl] In the prior to the Hinckley case, the insanity defense had been used in less than 2% of all felony cases and was unsuccessful in almost 75% of the trials in which it was used. Hinckley's parents wrote a book in 1985, "Breaking Points", about their son's mental condition.

As further fallout from the verdict, federal and some state rules of evidence excluded testimony of an expert witness' conclusions on "ultimate" issues drawn by expert witnesses, including that of and es on the issue of whether a criminal defendant is legally "insane". [cite web
url=http://www.springerlink.com/content/j0116723h6r18kp0/
title=Barring ultimate issue testimony
publisher=Springerlink
accessdate=2007-10-25] However, such is not the majority rule among the states today. [C. McCormick, Evidence (3d Ed.) § 12, p. 30.]

Shortly after his trial, Hinckley wrote that the shooting was "the greatest love offering in the history of the world", and was upset that Foster did not reciprocate his love. [ [http://query.nytimes.com/gst/fullpage.html?sec=health&res=9401E6DA1639F93AA35754C0A964948260 Hinckley Hails 'Historical' Shooting To Win Love] by Stuart Taylor Jr. "New York Times". 9 July 1982. Retrieved 21 March 2007.]

After being admitted, tests found that Hinckley was an "unpredictably dangerous" man who may harm himself, Jodie Foster, and any other third party. In 1983 he told "Penthouse" that on a typical day he will “"see a therapist, answer mail, play (his) guitar, listen to music, play pool, watch television, eat lousy food, and take delicious medication"”. [ [http://www.crimelibrary.com/terrorists_spies/assassins/john_hinckley/12.html Life at St. Elizabeths] by Denise Noe. Crime Library. Courtroom Television Network, LLC. Retrieved 15 April 2007.]

He was allowed to leave the hospital for supervised visits with his parents in 1999, and longer unsupervised releases in 2000. These privileges were revoked when he was found to have smuggled materials about Foster back into the hospital. Hinckley was later allowed supervised visits in 2004 and 2005. Court hearings were held in September 2005 on whether he could have expanded privileges to leave the hospital. Some of the testimony during the hearings centered on whether Hinckley is capable of having a normal relationship with a woman and, if not, whether that would have any bearing on what danger he would pose to society.

On , a federal judge ruled that Hinckley would be allowed visits, supervised by his parents, to their home outside of . The judge ruled that Mr. Hinckley could have up to three visits of three nights and then four visits of four nights, each depending on the successful completion of the last. All of the experts who testified at Mr. Hinckley's 2005 conditional release hearing, including the government experts, agreed that his depression and psychotic disorder were in full remission and that he should have some expanded conditions of release.

After requesting further freedoms including 2 week visits with his parents as well as a month long visit, U.S. District Judge Paul L. Friedman denied that request on Tuesday, , , but not because Hinckley wasn't ready.

"The reasons the court has reached this decision rest with the hospital, not with Mr. Hinckley," Friedman said, adding that Hinckley's prior visits have been uneventful and his family has done all that has been asked of them. "Unfortunately, the hospital has not taken the steps it must take before any such transition can begin".