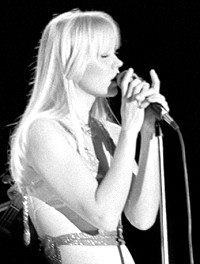 Agnetha Fältskog was born in , , . She was the first of two daughters of department store manager Knut Ingvar Fältskog (1922–1995) and his wife Birgit Margareta Johansson (1923–1994). Her younger sister is Mona Fältskog Ericsson (born 1955), who is a nurse in Stockholm. Ingvar Fältskog showed much interest in music and show business, whereas Birgit Fältskog was a very calm and careful woman who devoted herself to her children and household. Agnetha often said that female singers such as , , and were among her strongest influences.

In 1958, at the age of eight, Fältskog started taking piano lessons, which continued until 1964, when she was 14. She also sang in the church choir.

In the early 1960s, Fältskog formed a trio, The Cambers, with two female friends. The trio performed in unimportant venues and soon dissolved because of a lack of engagements.

In 1966, at the age of 16, when she was working as a switchboard operator in a car dealership, Fältskog started performing with Bernt Enghardt's Orchestra, which toured on weekends, since all the members had day jobs. Eventually Fältskog had to quit her job, however, because of overwork. The following year, in 1967, the band sent a demo tape to the record label Cupol. At Cupol, they were more interested in Agnetha than the orchestra, and she thus got her first solo recording contract. In late 1967, she recorded her first two singles. In 1968, she released her first album. Also in 1968 she submitted the song "Försonade" to , the Swedish heats of the . However it was not selected for the final.

In 1969, Fältskog released the single "Zigenarvän" about a young girl attending a gypsy wedding and falling in love with the bride's brother. Its release coincided with a heated debate about gypsies in the Swedish media, and Agnetha was accused of deliberately trying to make money out of the situation by writing the song.

In 1970, Fältskog released "Om tårar var guld," which was perhaps her most successful song in Sweden before the ABBA period in spite of a claim from a Danish composer postulating that Agnetha has used 22 bars from his composition "Tema," even though this was written in the 1950s and had never been recorded. The case dragged on until 1977, when a settlement was reached and Agnetha paid the Dane SEK 5,000.

The couple decided to separate in late 1978, and Fältskog moved out of their home on Christmas night, . In January 1979, the couple filed for divorce, which was finalised in June 1980. Both Fältskog and Ulvaeus agreed not to let their failed marriage interfere with their responsibilities with ABBA.

In 1971, Fältskog recorded the song "Dröm är dröm, och saga saga." Björn, Frida, and Benny all contributed with backing vocals. This song demanded a lot from the singer's breathing technique and made Fältskog decide to take singing lessons.

In 1972, Fältskog starred as in the original Swedish production of the musical , providing vocals for its original Swedish cast recording. Her relationship with , as well as her friendship with and , eventually led into the formation of . In 1975, during the same period as her bandmate recorded her Swedish number one album "", Fältskog recorded and produced her solo album "". These albums were both recorded between sessions and promotion for the ABBA albums "Waterloo" and "ABBA". Even though ABBA was already a number one act in Sweden by 1975, Fältskog's album failed to reach the Top 10 on the Swedish album charts, peaking at #11. "Elva Kvinnor I Ett Hus" did, however, spend a staggering 53 weeks on the chart, even longer than any of the ABBA albums, and it also contained three further entries for Fältskog: her Swedish language version of ABBA's "SOS" (also #4 on the single sales chart); "Tack För En Underbar Vanlig Dag"; and "Doktorn!". Except for the version of "SOS," all the songs had lyrics by Bosse Carlgren and music by Fältskog herself. The album had been underway since 1972, when Agnetha started writing the songs, but it got delayed because of the work with ABBA and her pregnancy. In 1974, she and Carlgren agreed on a concept for the album; it should consist of 12 songs, sung by 12 different women living in the same apartment building, each having a distinct name, identity, etc. In the end, only 11 songs were put onto the album, and the concept was never fully developed.

Between the years 1968 and 1980, Fältskog had a total of 18 entries on the important Svensktoppen radio chart, starting with debut single "Jag Var Så Kär" in January 1968 (peak position #1) and ending with "När Du Tar Mig I Din Famn" from compilation "" twelve years later, in January of 1980 (peak position #1). The 18 entries, most of which were composed or co-written by Fältskog herself, spent a total of 139 weeks on the chart during this time, with the biggest hit being 1970's "Om Tårar Vore Guld" (#1, 15 weeks).

Fältskog also recorded the Swedish Christmas album "Nu tändas tusen juleljus" with daughter which reached #6 on the Swedish album sales chart in December of 1981. Chartwise Fältskog was therefore by far the most successful solo artist of the four ABBA members, both before and during the band's international career. [ [http://svensktoppen.nu/artist.php?id=143 Svensktoppen.nu, detailed chart info] ]

Fältskog is also the only member of ABBA to have participated in again after having won Eurovision with "Waterloo" in 1974 - albeit only as a composer. In 1981 she wrote the ballad "Men Natten Är Vår" ("But The Night is Ours") with lyrics by Ingela Forsman but instead of performing the song in the contest herself she chose fairly unknown singer Kicki Moberg. The single, which Fältskog produced in the Polar Studios with the same musicians as on contemporary ABBA recordings, was backed with the Swedish version of "I'm Still Alive", entitled "Här Är Mitt Liv" ("Here is My Life"), a song which she herself had sung on ABBA's 1979 world tour. Moberg's recording of the song remains the only version to have been officially released to date. [ [Carl Magnus Palm: "Bright Lights - Dark Shadows", Omnibus Press UK 2001, ISBN 0.7119.8389.5] ]

In the 1980s, Fältskog released three English-language solo albums. Their success was mostly limited to , in particular.

At the end of 1982, she duetted with Swedish singer (and former ABBA backing vocalist) on a song called "Never Again", which became a Top Five hit in Sweden, Norway, Belgium, and . In the summer of the same year, Fältskog starred in the hit Swedish movie "Raskenstam" [ [http://www.imdb.com/title/tt0086173/ IMDB entry for Raskenstam] ] , and received positive reviews for her film début.

In May 1983, Fältskog released her first post-ABBA solo album, "". The album became a moderate hit in and , and reached the higher regions of the charts across Europe, including No. 1 in , , , and (where it became the biggest-selling album of the year), and No.18 in the . Critical reaction was mixed: "" wrote that " [This] treacly, string-sopped outing doesn't begin to do [Fältskog] justice", but "Stereo Review" magazine concluded that it was a "highly entertaining piece of good commercial record making." Two singles from the album became relatively big hits in continental Europe. "The Heat Is On" became a No. 1 hit in Sweden, Denmark, Norway, Finland and the Netherlands, but only just scraped into the UK Top 40. The title track also reached No.1 in Belgium. In , the album track "" was released as the lead-off single, reaching No. 29 on the chart, and No. 23 on the Top 50 singles chart in .

The same year, Fältskog was voted by the readers of as "Best Female Artist Of The Year," and received the Music Award Price .

Her next album, "", produced by of fame, was released in March 1985. "She is quite content to grace the works of various other lesser mortals with her immaculate, sugar-sweet voice," wrote Barry McIlheney in . The album sold well in parts of Europe, reaching No. 2 in Sweden and the Top 20 in Norway and Belgium, but failed to match the success of "".

In 1986, Fältskog recorded another duet, "The Way You Are," with Swedish singer , which became another No. 1 hit in Sweden. In mid-1987, Fältskog travelled to Malibu, , to record the album "I Stand Alone", produced by and Bruce Gaitsch (fresh off Madonna's "" collaboration). Released in November of that year, it was a minor hit in Europe, except for Sweden where it spent eight weeks at No. 1 and became the biggest selling album of 1988. The single from the album, "," on which Fältskog duetted with Peter Cetera, was released primarily in , and became her second solo single to chart on the (No. 93). It was also a Top 20 hit.

After the release of "I Stand Alone" in mid-1988 Fältskog took a break from her musical career and completely withdrew from public life.

In December 1990, Fältskog married for a second time, albeit briefly, to a surgeon named Tomas Sonnenfeld.

In 1996, her autobiography "Som jag är" was published in Swedish (in English the following year as "As I Am"), followed by several compilation CDs of her Swedish and English recordings.

In April 2004, Fältskog released a new single, "" (a cover of the song originally recorded by ). It reached No. 2 in Sweden, No. 11 in the , and became a sizeable hit throughout . "It is exciting to hear her voice, utterly undimmed, delivering a tellingly-titled song," commented 's "". A few weeks later, the album "", a collection of Fältskog's covers of 1960s classic , was released, topping the charts in Sweden, hitting the Top Five in Finland and Denmark and peaking at No. 12 in the UK. "I love this record," enthused Pete Clark in London's "", while "" pointed out that "it reveals a genuine affection for the era's forgotten pop tunes." "" reviewer noted that "her voice is still an impressive pop instrument," and "" shared the same sentiment suggesting that "time hasn't diminished her perfect voice." Reviewing the release in "", Caroline Sullivan wrote: "Agnetha Fältskog has a vulnerability that gets under the skin of a song. She may be cheating a trifle by including no original material on this collection of 1960s covers, but if anyone can do justice to the likes of "," it's her. The soaring sentimentality evokes and in their mini-skirted pomp, and I don't say that lightly." The release attracted major media attention across Europe, but Fältskog staunchly refused to be involved in any extensive promotion of the album (including personal appearances), and thus limited her public exposure to several short newspaper interviews, a few videos and a Swedish-language low-key TV special. Yet, the album managed to sell more than 500,000 copies worldwide, 50,000 of those in the UK alone.

Shortly after this release, for the 2004 semi-final of the , staged in thirty years after ABBA had won the contest in Brighton, Fältskog appeared briefly in a special comedy video made for the interval act, entitled "Our Last Video." Each of the four members of the group appeared briefly in cameo roles, as did others such as and . The video was not included in the official DVD release of the Eurovision Contest, but was issued as a separate DVD release. It was billed as the first time the four had worked together since the group spilt. In fact, they each filmed their appearances separately.

In 2004, Fältskog was nominated for "Best Nordic Artist" at the s, and at of that year (for the first time in almost 20 years), she gave an extensive interview which was filmed by Swedish TV. Around the same time, released a lavishly produced 6 comprising Fältskog's Swedish solo career before ABBA (five original solo albums - 1968, 1969, 1970, 1971, 1975 - and an additional compilation disc with bonus tracks).

In January 2007, Fältskog appeared at the final performance of "Mamma Mia!" in Stockholm (as she had at its opening in 2005). Together with ex-husband and former colleague Björn, she appeared on stage at the after show party held at Stockholm's Grand Hotel. She also sang a duet, "True Love," with of "Chess" fame.

In July 2008, Fältskog arrived at the Swedish premiere of the film version of "Mamma Mia!" with former colleague Anni-frid Lyngstad and movie star . The three danced in front of thousands of fans before joining the film's other stars and Benny Andersson and Björn Ulvaeus on the Hotel balcony for the first photograph of all four ABBA members together in 22 years. The event made front pages of newspapers around the world as well as being shown live on news channels.