The Leamside Line (originally part of the Durham Junction Railway) is a railway line in the North East of England, branching off from the main East Coast Main Line (ECML) at Tursdale Junction in County Durham, and continuing north through Washington and Wardley, finally joining the Newcastle to Sunderland line at Pelaw Junction.

It is currently out of use, having been mothballed by British Rail in 1991 after the closure of the Freightliner freight terminal at Follingsby, near Washington, which was the recipient of most of the line's traffic in its last years. A short section of the line from Pelaw Junction remained in operation for a number of years, serving the open-cast coal mine at Wardley, but this too has now closed.

The line opened in 1839, and was formed from the original lines of the Newcastle and Darlington Junction Railway and the Durham Junction Railway. It constituted part of the original East Coast Main Line route from Edinburgh to London, eventually being incorporated into the North Eastern Railway. The line's main source of revenue, as with most of the early railways, was mineral traffic, principally coal from the Durham coalfield. The line was linked to many private colliery branch lines and wagonways.

It remained part of the main line until 1872 when the route was bypassed by the NER's Bishop Auckland to Gateshead line and Croxdale link, which became part of the ECML and remain so to this day.

Thereafter it continued to carry local passenger services and freight traffic, as well as serving as a useful diversionary route from the ECML. Passenger services between Leamside and Ferryhill were withdrawn in 1941 and Leamside station closed in 1953. The last regular passenger service was withdrawn in May 1964 as part of the infamous Beeching Axe although, in its latter days, this had only consisted of an early morning 'newspaper' train from Newcastle to Fencehouses and Durham only and a single workers' return service from Newcastle to Washington on Mondays to Fridays.[1] Coal and other freight continued to be carried until the gradual closure of the Durham coalfield in the 1970s and 1980s resulted in a severe drop in the line's traffic. It was mothballed in 1991.

South of Victoria Viaduct, the line merged with the direct Durham to Sunderland Line for a short distance. This also fell to the Beeching Axe in 1964. 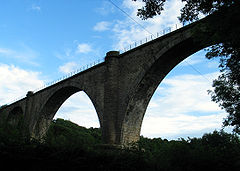 The Victoria Viaduct over the River Wear near Washington. This massive railway viaduct, a spectacular engineering feat for the time, was completed in 1839, and carried the East Coast Main Line between London and Edinburgh until 1872.

The main engineering feature of the line is the Victoria Viaduct, or 'Victoria Bridge' until 1959,[2] over the River Wear near Washington. It is said to be based on the Roman bridge in Alcántara, Spain.

The rails pass 135 feet (41 m) over the valley, carried on four great arches. The middle two arches span 160 and 144 feet (49 and 44 m), and the arches beside them span 100 feet (30 m). In addition, there are three 20-foot (6.1 m) approach arches on both ends. Of the extant masonry railway viaducts in Britain, the Victoria has the second longest single span,[3] exceeded only by the Ballochmyle Viaduct.

During the line's period of operation, passenger stations served were:

Re-opening the line is supported by many stakeholders including the Tyne and Wear Passenger Transport Authority, the Association of Train Operating Companies and Durham City Council. The case for re-opening the line includes providing a Tyneside to Teesside commuter express train between Newcastle Central Station and Middlesbrough which, according to the 2007 report produced by AECOM Faber Maunsell, would have a passenger patronage level of over 700,000 per annum with 90,000 of those utilising Park and Ride facilities at Washington and Durham (Belmont).[4] In addition, the route would become a strategic diversionary route from the East Coast Main Line and could accommodate expansion of the Tyne and Wear Metro system between Washington and Pelaw.

TyneTees Express railway stations, as stated by the Tyne and Wear Passenger Transport Authority[5] would include: 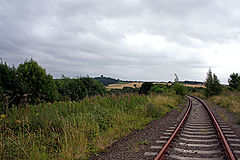 Leamside Line track after 17 years of no use 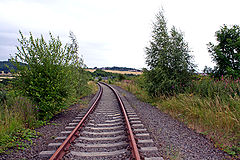 Track curves up to Victoria Viaduct over the River Wear

Part of the Durham to Sunderland line that left the Leamside Line near the south-east end of the Victoria Viaduct has been brought back into use (2002) for the Sunderland Extension of the Tyne and Wear Metro, terminating at South Hylton, around 3 miles from the former junction with the Leamside Line.

Around one mile (1.6 km) of track to the south of Penshaw was stolen in 2003[6] and will have to be replaced if the line is finally reopened. This theft, which took place over a six day period using a gang of workers who were unaware that the work was illegal, has substantially raised the costs of reopening the route.

Substantial parts of the line and infrastructure are also missing from around the former Usworth station which is also severely overgrown.

On 4 December 2006, Tyne and Wear Passenger Transport Authority announced that it had commissioned a study into the future use of the line, with a view to possible re-opening as a suburban railway linking into the local transport network.[7] The next day, it was announced that Network Rail had also signed up to the study, although current plans for removal of the track (see below) would still proceed.[8] The study concluded in 2008 that the most appropriate use of the line would be to carry a regional service linking the Tees Valley and Tyne and Wear regions, with the highest level of wider economic benefits achieved by minimising the journey time between the end points, rather than serving a large number of intermediate stations. According to the report, passenger demand would be great enough to produce a farebox revenue of over £2 million per year[9]. Such a service would also allow scope for freight trains to operate.

The line had been briefly considered in 2000 for reopening by Railtrack as a diversionary freight route to take the burden from the congested ECML. A number of studies have advocated re-opening the line, for example The vision for passenger rail services in the Tees Valley. Re-opening the line would provide economic benefits to areas depressed since the demise of the coal mining industry. However, these plans were put on hold.

If the Leamside line is opened to passenger traffic, it would lead to the reopening of several railway stations along the route. The Select Committee on Transport, Local Government and the Regions has expressed concern at the delays in determining the future of this line.[11]

On 15 June 2009, the Association of Train Operating Companies (ATOC) included Washington as one of a number of towns in the UK that would benefit from the resinstatement of existing rail links that were closed or mothballed in the second half of the twentieth century. This would entail the opening of all or part of the Leamside Line either as part of the National Rail network, or as an extension of the Tyne and Wear Metro.[12] Both systems could potentially be connected at the northern end of the line at Pelaw Junction, while the Leamside line continues to link with the East Coast Main Line to the south. A third option would be to form a loop line with the Sunderland Metro extension, which runs on the trackbed of the Durham to Sunderland Line as far as South Hylton, with the disused trackbed continuing to its junction with the Leamside Line. Although the historical junction only allowed trains to merge onto the Leamside Line in a southerly direction, space is available to create a short section joining the two tracks in the other direction.

Tyne and Wear Integrated Transport Authority once again showed its support for the reopening of the line on 28 January 2010 when members once again called for improved links between Tyneside and Teesside.[citation needed]

On 14 September 2006, Network Rail announced plans to lift the track along the full length of the line. It was maintained that the track, after 15 years out of use, would need replacing anyway if the line was ever to re-open, and that this move would have no implications for any future use of the railway. The company also pledged that all bridges would be left in place, with no sales of land attached to the line.[13] A former British Rail engineer, who oversaw a major upgrade of the line just two years before its closure, has countered Network Rail's claims, saying that the track is still in excellent condition and would need only minimal refurbishment to bring it back into use.[14] In July 2010 the government said they have no plans to reopen the line, but the land the track runs on will not be sold.[15] The track remains extant.