Eve's Plum was a New York City-based alternative rock band who recorded in the 1990s. The band was fronted by Colleen Fitzpatrick. Eve's Plum released two albums and numerous singles on 550/EpicRecords, before breaking up in 1998.

In 1991, Ben Kotch who played drums, and his twin brother Michael who played guitar, had been looking to start a band and needed a singer and bassist. Michael Kotch met Colleen Fitzpatrick while both were in school at New York University, she became the group's singer and together they formed the group Eve's Plum.[1] Chris Giammalvo joined the band on bass guitar. He would later be replaced on bass by Theo Mack in 1994. The group's name was derived from actress Eve Plumb, best known as Jan Brady from The Brady Bunch.[2] 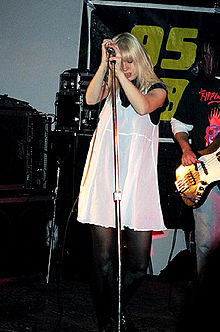 Eve's Plum toured independently throughout 1991 and 1992. The band signed a recording contract with Sony Records in 1992. Their debut album, Envy, was produced by Roger Greenawalt and released in 1993. The group's debut album failed to chart on the Billboard 200. The first single, "Blue", was also released in 1993 and was shown on an episode of Beavis and Butthead but did not chart on the Billboard Hot 100. The band's second single "Die Like Someone", also failed to make an impact. The album's third single, "I Want It All", became the only single of their career to chart. It spent one week on the Modern Rock Chart at number 30.[3] It was also featured in the film The Next Karate Kid. In 1994, Eve's Plum released the I Want It All Alive EP. The EP was a limited release. That same year Chris Giammalvo left the band and was replaced by Theo Mack on bass.

In 1995, Eve's Plum recorded the single "Eye", for the soundtrack to the film Higher Learning. The band also appeared in the film performing the song during the carnival scene. The group's second album, Cherry Alive, was released in September 1995.[4] The first single released from the album was called "Jesus Loves You (Not As Much As I Do)". The single failed to chart. Although three more singles were released from Cherry Alive to radio: "Wishing the Day Away", "Cherry Alive", and "Fairy Princess", none of the singles were successful for the band and 550 Music dropped the group in 1996. Shortly before being dropped by their label the band, after wrapping a promotional tour for Cherry Alive, returned to their home of NYC to write new songs for what would have been their third album. In the summer of 1996 they wrote a few new songs and performed a show in Albany, New York. The show was recorded, and released as Eve's Plum Live in Albany. However, it is extremely rare and it is unknown if any surviving copies still exist.

There are a few songs which were performed live but didn't make it to a studio album, such as "Ride with You" (which was supposed to be on Cherry Alive), Lost in Space (recorded for a compilation), "Ride With You", "Ice Cream", "The Way You Look", "So What", and "Twist It" (released as a B-side).[citation needed]

After being dropped by their label, they continued to perform for some time after. A cover version of "Save a Prayer", on Mojo Records' 1997 The Duran Duran Tribute Album, was their final released recording.

Colleen Fitzpatrick has had commercial success with a solo career under the name Vitamin C. Michael Kotch, who married Fitzpatrick in 2004,[5] went on to play in the band Ruth Ruth. Benjamin Kotch went on to drum for The World/Inferno Friendship Society from 1997 to 2007. Chris Giammalvo joined Madder Rose in 1997[6] and played on their last two albums.[7] Theo Mack went on to become a sound man, touring with various bands.[citation needed]