Infobox Single
Name = Save a Prayer 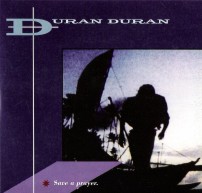 The soft, seductive ballad was the third single from the band's second album "Rio". It became Duran Duran's biggest hit to date (at the time) in the , reaching #2, held out of the top spot by Survivor's "".

It was not originally issued as a single in the , although the video was very popular on . However, a live version from the "Arena" album was released in January 1985 and reached #16 on the .

The video was filmed by director among the jungles, beaches, and temples of in April, 1982. Scenes were filmed atop the rock fortress of , and among the ruins of a Buddhist temple at .

A live version of the song was released in 1984. The video was taken from 's concerts that were filmed for the "".

The UK release of "Save a Prayer" was backed with a of "Hold Back the Rain".

The song has been covered by , (titled as "Save It 'Til The Mourning After"), , , Dune, Oliver Haze, , the and Louis XIV. The Christian band recorded a version, with lyrics modified to reflect a more explicitly religious feeling, for their unreleased album "Just Can't Get Enough (Of Jesus!!!)".

The main tune of 'Save a Prayer' can be recognised in the song 'Salomé (Zooromancer edit)' released in 1992 by as the 3rd track on the single of 'Who's gonna ride your wild horses'.

In 2007 it has been referenced in the lyrics of the song by , "Teddy Picker" from their album "": "I don't want your prayer, save it for the morning after".

The release was accompanied by a new live video, drawn from footage shot in 1984 for the concert film "Arena".