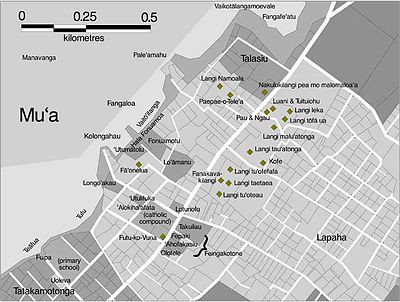 Map of Lapaha with locations relevant to the Tuʻi Tonga dynasty. All diamonds (except the Fāʻonelua tree and the Futu-ko-Vuna tree and stone) indicate the location of a langi. Different authorities disagree about the exact identifications, though

Muʻa is a small city in the Hahake (eastern) district on the island of Tongatapu, and it was for centuries the ancient capital of Tonga. It is divided in the villages Lapaha and Tatakamotonga, is close to Talasiu and famous for the ancient langi (royal burial tombs).

Muʻa is situated along the eastern side of the lagoon of Tongatapu. Except for a 50 m to 200 m-wide zone along the shore which is low-lying mud (now largely landfilled with stones), the remainder of the village is on high-lying red volcanic soil of high fertility.

Most people of Lapaha are Roman Catholic, while Tatakamotonga is largely Wesleyan, although both see an increasing number of Mormons. This has a historical reason: the last Tuʻi Tonga was Roman Catholic and lived in Lapaha.

The Tuʻi Tonga and his retinue stayed in Lapaha, his residence being Olotele and ʻAhofakasiu, while Takuilau was for his wives (not to be confused with the current high school of the same name but further to the east). Subchiefs and servants on the other hand lived in Tatakamotonga.

When, around 1470, the Tuʻi Tonga line started to lose power to the Tuʻi Haʻatakalaua, and another century later to the Tuʻi Kanokupolu, chiefs belonging to these lines were not welcome in Muʻa, and had to stay on the low-lying coastal areas, separated from the 'real' chiefs (i.e. those belonging to the Tuʻi Tonga) by the Hala Fonuamoa (dry land road). The former became known as the kauhalalalo (low road people) and the latter as the kauhalaʻuta (inland road people), which nowadays are still two important moieties in Tonga. 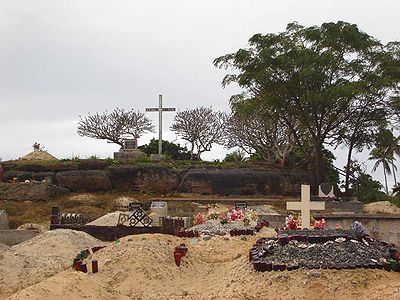 Langi Tuʻofefafa, with a cemetery at its base 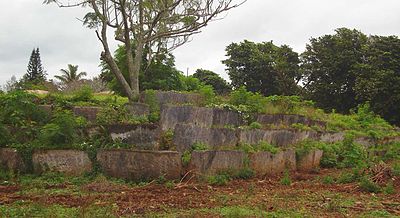 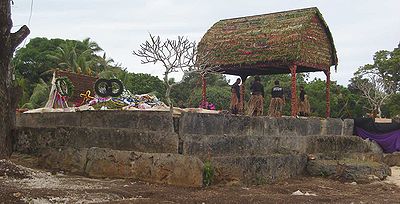 Langi Nā Moala, after the funeral of the Tuʻipelehake

Whatever political power the Tuʻi Tonga yielded to their rivals, they gained in spiritual power, and as a kind of high priest they were perhaps even more awesome than as kings. When a Tuʻi Tonga died he was buried in one of the huge tomb hills, known as langi, of which there are still at least two dozen in Lapaha. The Tuʻi Haʻatakalaua were also buried in such tombs, but they are called fale instead.

The langi are big, artificial hills surrounded by huge slabs of coral rock, usually in three or more tiered layers. These slabs were quarried from several places along the coast of Tongatapu or neighbouring minor islands. The waves of the sea made them over the centuries, by compacting coral sand into layers of 10–20 cm thick. They were only to be dug out and then transported by boat to the building site. Nevertheless the accuracy by which the slabs were cut to shape so that they fit along each other with barely any space to spare is remarkable.

One of the best-preserved langi is the Paepae-o-Teleʻa, which is even more remarkable as the slabs along the corner really have an 'L' shape.

The story that the slabs were moved by magic means from ʻUvea to Tonga is just a myth. ʻUvea is volcanic and has not got the proper geology. This fact has always been known, as shown, for example by a stanza of the poem named Laveofo from around the 18th century by Tufui.

The last Tuʻi Tonga, Laufiltonga was buried in langi Tuʻofefafa. His grave is still marked with a huge cross, as he died as Catholic.

The langi are still used nowadays as burial sites. When the Kalaniuvalu chief died in 1999 he was buried in the Paepae o Teleʻa. When the Tuʻi Pelehake chief, ʻUluvalu and his wife Kaimana died in 2006, they were buried in langi Nā Moala.

Also worthwhile visiting are the remaining groundworks of an old, deserted fort on the border of Talasiu and Lapaha.

The nickname of Lapaha is Paki mo e toʻi (picked with sap), referring to the many sweet smelling flowers which were to be picked regularly to be made into kahoa, (flower garlands) for the lords. Likewise Tatakamotonga is also known as Kolokakala (fragrant town) and other variants of this name.

An important tree with beautiful red flowers grew (and still grows) on the coastal marshland. Its name is Fāʻonelua and it is a unique species of mangrove. Only the Tuʻi Tonga was allowed to wear its flowers as a garland, and as such the name has become a symbol for his reign.