Vystavochnaya (Russian: Выставочная, literally "Exhibition") is a station on the Filyovskaya Line of the Moscow Metro. It was opened on 10 September 2005, and called Delovoy tsentr (Деловой центр, literally "Business Centre") before 1 June 2009[1]. A transition period of one year has been granted to effect the change in names.

The high-tech design, which was the work of architects Aleksandr Vigdorov, Leonid Borzenkov, and Olga Farstova, is a radical departure from previous Metro stations.

The station is built on two levels, with the platform on the lower level. The upper level consists of two walkways which span the length of the platform. One walkway, the larger one, is enclosed in glass and sweeps from one side of the station to the other and back in a large arc. The other walkway is open and straight, running directly above the inbound track. The D-shaped area between the two walkways extends to the full height of the station. The two rows of pillars span both levels and are clad in stainless steel. The walls are faced with white plastic panels and brown marble, and Alucobond was used for the ceiling. 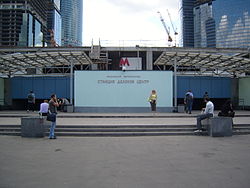 Delovoi Tsentr will only be the first station in a future three station transfer complex involving a cross-platform transfer between the Solntsevo-Mytischenskaya Chordial Line and the Strogino-Perovskaya (currently Kalininskaya) Line. Both of the new stations are actually completed, but presently are unopened and remain as derelict carcasses

The entrance to the station is built into the lower level of Moscow International Business Centre (Moscow-City), near the north bank of the Moskva River, serivng access to Moscow Expo Center as well as Moscow-City.