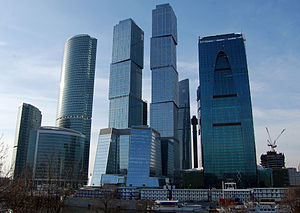 The Moscow IBC is expected to become the first zone in Russia to combine business activity, living space and entertainment in one single development.[3] The Moscow government first conceived the project in 1992.[4] An estimated 250,000 – 300,000 people will be working, living, or visiting the complex at any given time.[3]

The construction of Moscow IBC is taking place on the Presnenskaya embankment of the Moscow River approximately 4 kilometers (2.5 mi) west of Red Square, and just east of the Third Ring Road. The project occupies an area of 60 hectares,[3] the territory chosen being the only area in central Moscow that can accommodate such a project[citation needed]. Before construction began, the area represented an old stone quarry where most of the buildings were old factories and industrial complexes that had been closed or abandoned. The total cost of the project is estimated at $12 billion.[4] 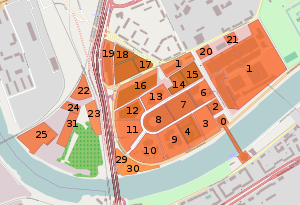 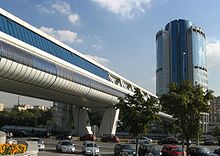 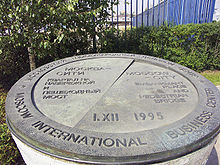 The stone symbolizing beginning of construction

The Tower 2000, a 30-story office building with four floors underground, is located on the south bank of the Moscow River. The tower is connected to the MIBC by the Bagration pedestrian bridge, which was the first completed structure of the MIBC, finished in 1999. It is located on the opposite side of the river from the main development. There is also underground parking, restaurants, and other entertainment and attractions in the tower. The tower is 106 meters high,[13] and the total floor area of the complex is 60,000 square meters. Construction began in 1996 and the building was completed in late 2001.[4] 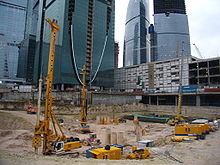 Imperia Tower is a multipurpose complex located on plot 4 of the Moscow International Business Center. It will consist of 2 buildings, the mixed-use Building A and the water park entertainment complex in Building B.

Building B (currently on hold) is planned to incorporate the water park and will be a focus of entertainment for the MIBC Complex. It will also house a shopping mall, restaurants and cafés, and will be open year-round.

One of the most difficult structures to build in the MIBC, the Central Core, is located on plots 6, 7 and 8. The Central Core consists of two main sections – the above-ground and underground.

The underground part includes three metro stations. One is opened as a part of Filyovskaya Line branch. Second is planned to open as a part of Kalininsko-Solntsevskaya Line in 2014. The complex will also be connected to Vnukovo and Sheremetyevo airports via a high-speed transport system. Underground, parking is provided for up to 2750 vehicles, as well as central control rooms for maintenance, security, and other operations in the centre. The underground space also houses a shopping centre, which also functions as a lobby for the underground part of the complex, with walkways and passages for travel between other buildings in the MIBC. VIP parking will be available and is located on the western side of the Central Core.

The above-ground section is divided into three functional zones: a hotel on plot 8а, a retail-entertainment complex on plots 8b and 7, and a cinema/concert hall with a capacity of 6000 people on a plot 6. The hotel is still under construction, and the volume of capital investments will top USD $50–55 million[citation needed]. The hotel has 5 blocks of elevators connecting upper floors of the hotel with the underground parking places and retail enterprises. Plans are to include apartments, restaurants, winter gardens and terraces, as well as technical and auxiliary rooms.

The retail-entertainment complex is located in the central part of a building on sites 8b and 7. It is divided into four zones conceptually reflecting the seasons. The complex is formed by four 5-floor modular units and incorporates retail and exhibition zones, entertainment attractions, a park, restaurants, and galleries. A glass dome covers the main recreational space.

The film-concert hall is located on plot 6 and will host significant entertainment attractions such as gala concerts, forums, and large celebrations. The total amount of capital investments is estimated at over USD $120–140 million[citation needed].

The City of Capitals complex, symbolizing Moscow and St.Petersburg, is located on plot 9. The tower Moscow has become the first super tall skyscraper in Europe.

More than half of the top floors are taken up to an entertainment complex, office suites, and large apartments. The Сity of Capitals consists of two towers – the 73-floor "Moscow Tower" and the 62-floor "St.-Petersburg Tower", reaching heights of 306 and 255 meters, respectively. Floors 17 and 18 of both towers are offices. The entire complex sits on a main lobby consisting of 6 underground floors and 4 aboveground floors of public space. The upper floors of the base structure will contain shops, a fitness centre, presentation halls, and restaurants.[14]

To create the concept for the offices in the City of Capitals, other business complexes and business centres from other parts of the world were studied.

The spatial structure of the complex with steps of columns 9 meters high enables the organization of offices with open layouts from 500 up to 3,500 square meters. An entrance to the office section of the complex is situated near a quay, leading from underground parking to retail galleries.

The “Naberezhnaya Tower” complex was completed in August 2007. It includes three buildings of heights of 17, 27 and 60 floors. In October 2004, the 17-story building was fully completed. In October 2005 the second, 27-story building was put into operation. Construction of the third skyscraper began in January 2005. Three plazas, one for each building, are at the first level below ground, and they are connected by a central pier.

A first class office complex, including one underground floor, which will be reserved for retail trade, will be located in the tower. The other underground floors will be used as parking space.

A transport terminal, located on plot 11, will be the transfer point between different subway lines and light rail lines and other public systems. There will also be offices, hotels, a clinic, and parking.

There will be a transfer station between the metro and a high-speed transport system, which is planned to extend from Moscow-city, eventually ending at the three local airports. The multilevel terminal will connect the underground zones of Moscow-city to the metro stations and to other municipal transportation, lighted by means of light wells, with retail space, living and office areas.

The complex will contain 106 office suites, 3 hotels with 342 rooms, a main hospital, points of retail trade, and parking for up to 1250 vehicles.

The Eurasia Tower, located on plot 12, is an office/recreational space with a total area of 207542 square meters. It will be situated on a three-tier podium in which will be placed a fitness centre, entertainment, restaurants, and shops. Other areas will be distributed as follows: 106 231 square meters will be reserved for office space, and residential apartments will occupy 21185 square meters. On the bottom, there will be parking for more than 1000 cars. The external design of the building is a combination of classical and modernist style. On the outside of the building, a scenic elevator will run up and down for views of the entire city. While two thirds of the tower has been built, the current status is 'on hold' 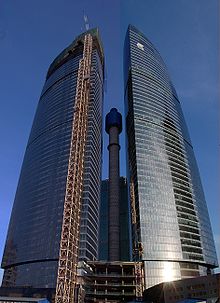 Upon completion, this will be the tallest building in Europe, at the height of 506 meters.

Office complex "Federation" is on plot 13 MIBC "Moscow-city". The structure represents a design of two tri-hedral towers with heights of 360 and 243 meters above the ground, located on a common base of 10 floors. Between them is the spike, with a height of 506 meters. A restaurant is planned in the towers, along with office suites and residential apartments divided by technical floors. In the spike, elevators with panoramic views and an evacuation stairway will be placed. In the base of the towers a full complex of retail and household services is planned. The underground part includes parking places, technical premises, and the walkway connecting the complex with the central part of a Business Center, northern departure and a complex 12 site. 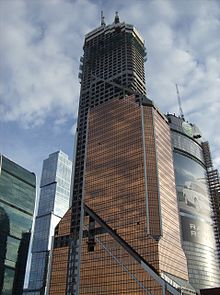 The Mercury City Tower is a multipurpose building with housing, offices and shops.[15] The tower is located on plot 14 of the MIBC. The structure's height is 322 meters (380 with spire)[16] above ground, with five underground floors[citation needed]. Architect Frank Williams says that it is the first environmentally-friendly building in Russia, and it is designed to collect melting snow water, as well as provide 70% of the workplaces with access to daylight.[16][17]

The City Hall and City Duma will house the Moscow government and duma. The structure will consist of four, 308.4-metre towers. Currently, most of the administration's buildings are scattered all over the city. This complex will bring them together, which will provide better organization.

Spatial construction from 4 vertical structural elements, formed by 4 70 floor towers with the grouped around of communication "kernels"; 4 horizontal 8 floor "bridges" uniting towers in the top part and twenty "bridges" in height in a floor, "tieing up" all volume through everyone 8 floors on a vertical. Communication "kernels" come to the end with helicopter platforms and evacuation of a ladder, high-speed passenger, load-lifting, cargo (technical) lifts, channels of engineering communications, technical premises include. Each circle of horizontal bridges has a winter garden on a maintained roof. Favorable temperature humidity the mode, sufficient light exposure of all functional zones and "trailing" winter gardens is reached closing by glass of "apertures" between vertical both horizontal structural elements and a transparent covering of the central space of a construction.

The complex will include a commercial part accommodating public, entertainment and business facilities as well as underground parking space. Apart from the government offices, the bottom part would be open to visitors around the clock.

The first ten floors were to be occupied by a parking garage. In the bottom part of a tower of office premises, a hotel would be located, the top floors occupied by apartments. The business part of the project was expected to house a large congress centre, hotel, an entertainment zone, a casino and a park of attractions. Construction was planned on a plots 17–18 MIBC "Moscow-City". The developer of the project was the Moscow company (MDC), in cooperation with the city government and CT-Towers is the affiliated structure STT Group created for realization of projects in MIBC "Moscow-City". The final project of a tower had been presented by architect Norman Foster on 15 March 2006 at exhibition MIPIM-2006 in Cannes. After completion, Russia Tower would have become the tallest tower in Europe.

However, construction was halted in November 2008 due to financial difficulties. In February 2009, it was announced that the project has been suspended and that it is now unlikely that the tower, in its original form, will be built. In June 2009, construction of the Russia Tower was cancelled in the face of mounting financial pressure.[21][22]

The recreational zone of the Complex differs from the developed infrastructure, characteristic of a class-A building, and includes retail zones, restaurants and a cafe, a bank, a dining room for employees, a fitness-club, a beauty salon, and service platforms.

Major thoroughfares through Moscow-City are the Third Ring and Kutuzovsky Prospekt.

Three metro stations were initially planned for the Filyovskaya Line. The station "Delovoi Tsentr" (Business Center) opened in 2005, and was later renamed "Vystavochnaya" ("Exhibition") in 2009. The branch extended to the "Mezhdunarodnaya" ("International ") station in 2006, and all work on third station, Dorogomilovskaya (between Kiyevskaya and Delovoi Tsentr), has been postponed. It was recently announced that there are plans to extend the branch as far as the Savyolovskaya station, on the Serpukhovsko-Timiryazevskaya Line.

A rapid transit system to Vnukovo Airport and Sheremetyevo Airport with terminals in each airport is also planned.

The City Hall and City Duma will be home to the Moscow government. Other important organisations and businesses, for example, the Global Hyatt Corporation, have purchased space in Moscow-City. There is also a large pedestrian-mall bridge crossing Moskva River. The area is to become a new hub for business in Moscow and Russia, following completion.