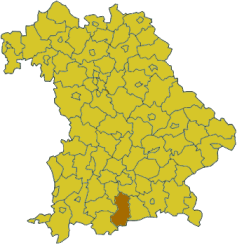 Bad Tölz-Wolfratshausen is a district in , . It is bounded by (from the south and clockwise) and the districts of Garmisch-Partenkirchen, , Starnberg, Munich and Miesbach.

The district was established in by merging the former districts of Bad Tölz and Wolfratshausen.

Bad Tölz-Wolfratshausen is one of the alpine districts on the German-Austrian borders. The valley of the Upper River separates the Bavarian from the , a portion of the Alps mainly located in Austria. The highest peak of the district is the Schafreuter (2100 m).

The Isar River enters the district in the southwest and runs northwards passing the two main towns of the district, Bad Tölz and Wolfratshausen. In the high alpine south there are several mountain lakes: the Walchensee (16 km²), the Kochelsee (6 km²) and the Sylvensteinsee (an artificial lake in the course of the Isar River). In the northwest the district borders on ("Starnberger See").