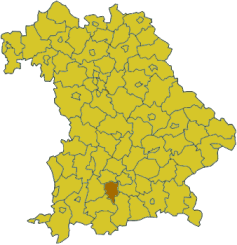 Starnberg is a "Kreis" (district) in the southern part of , . Neighboring districts are (from the north clockwise) Fürstenfeldbruck, Munich, , and Landsberg.

Starnberg is often credited with being Germany's wealthiest district in terms of average income.

Main geographic feature of the district are the five lakes - the and , as well as the smaller "Weßlinger See", "Wörthsee" and "Pilsensee". The lakes were formed by the s of the last . Hence the district is also called "Fünf-Seen-Land" (five lake county).