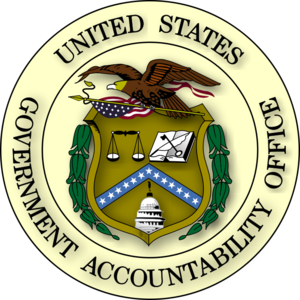 The Government Accountability Office (GAO) is the , , and investigative arm of the . It is located in the Legislative branch of the United States government.

The GAO was established as the General Accounting Office by the (USPL|67|13, USStat|42|20, ). This Act required the head of GAO to "investigate, at the seat of government or elsewhere, all matters relating to the receipt, disbursement, and application of public funds, and shall make to the President...and to Congress...reports (and) recommendations looking to greater economy or efficiency in public expenditures" (Sec. 312(a), USStat|42|25). According to GAO's current mission statement, the agency exists to support the Congress in meeting its Constitutional responsibilities and to help improve the and ensure the of the federal government for the benefit of the American people. The name was changed in 2004 to better reflect the mission of the office. [ [http://www.gao.gov/about/rollcall07192004.pdf GAO.gov] ]

The GAO is headed by the , a professional and non-partisan position in the U.S. government. The Comptroller General is appointed by the President, by and with the advice and consent of the Senate, for a 15-year, non-renewable term. The President selects a nominee from a list of at least three individuals recommended by an eight member bi-partisan, bicameral commission of congressional leaders. The Comptroller General may not be removed by the President, but only by Congress through impeachment or joint resolution for specific reasons ("See Bowsher v. Synar", 478 U.S. 714 (1986)). Since 1921, there have been only seven Comptrollers General, and no formal attempt has ever been made to remove a Comptroller General. The long tenure of the Comptroller General and the manner of appointment and removal gives GAO a continuity of leadership and independence that is rare within government.Fact|date=June 2008

From the organization's founding in June 1921, when it was designated as a government establishment independent of the executive branch, until July 2004, GAO was an abbreviation for General Accounting Office. The current name was established as part of the (USPL|108|271, ).

GAO examines the use of public funds, evaluates federal programs and activities, and provides analyses, options, recommendations, and other assistance to help Congress make effective oversight, policy, and funding decisions. In this context, GAO works to continuously improve the economy, efficiency, and effectiveness of the federal government through financial audits, program reviews and evaluations, analyses, legal opinions, investigations, and other services. The GAO's activities are designed to ensure the 's accountability to the Congress under the Constitution and the government's accountability to the American people.Fact|date=July 2007

Over the years, GAO has been referred to as "The Congressional Watchdog" and "The Taxpayers' Best Friend" for its frequent audits and investigative reports that have uncovered waste and inefficiency in government. The news, media, television, electronically-based news sources, and print, often draw attention to GAO's work by doing stories on the findings, conclusions, and/or recommendations in GAO reports. In addition, Members of Congress frequently cite GAO's work in statements to the press, congressional hearings, and floor debates on proposed legislation. In 2007 the Partnership for Public Service ranked GAO second on its list of the best places to work in the federal government and "Washingtonian" magazine included GAO on its 2007 list of great places to work in Washington, a list that encompasses the public, private, and non-profit sectors.

Labor-management relations became fractious during the 9-year tenure of the 7th Comptroller General, David M. Walker. On , , GAO analysts voted by a margin of two to one (897–445), in a 75% turnout, to establish the first union in GAO's 86-year history. The analysts voted to affiliate with the (IFPTE), a member union of the . There are more than 1,800 analysts in the GAO analysts bargaining unit; the local voted to name itself IFPTE Local 1921, in honor of the date of GAO's establishment. On , , the GAO analysts' union approved its first-ever negotiated pay contract with management; of just over 1,200 votes, 98 percent were in favor of the contract.

GAO is a , as all of its reports are available on its website (www.gao.gov), except for certain reports whose distribution is limited to official use in order to protect national and homeland security. The variety of topics reported on range from Federal Budget and Fiscal Issues to Financial Management, Education, Retirement Issues, Defense, Homeland Security, Administration of Justice, Health Care, Information Management and Technology, Natural Resources, Environment, International Affairs, Trade, Financial Markets, Housing, Government Management and Human Capital.

Most GAO studies and reports are initiated by requests from members of Congress, including requests mandated in statute, and so reflect concerns of current political import, but many reports are issued periodically and take a long view of U.S. agencies' operations. Fact|date=July 2007 Examples of these are the annual "Performance and Accountability Series" and "High Risk Update".

The Government Accountability Office also establishes standards for audits of government organizations, programs, activities, and functions, and of government assistance received by contractors, nonprofit organizations, and other nongovernmental organizations. These standards, often referred to as Generally Accepted Government Auditing Standards (GAGAS), are to be followed by auditors and audit organizations when required by law, regulation, agreement, contract, or policy. These standards pertain to auditors' professional qualifications, the quality of audit effort, and the characteristics of professional and meaningful audit reports.

Single copies of printed versions of GAO reports can be requested (if you know the publication number of the document) for free via mail, phone, fax or a form on the agency website.